Want to Watch a Jets Game From the Comfort of an Indoor/Outdoor Lounge AND Track Sports Betting Lines at the Same Time? Try the Fubo Sportsbook Lounge. (For Fubo Sportsbook Users Only)

MetLife Stadium has the following premium experience seating options: the EY Coaches Club and the Mezzanine Clubs. Other opportunities include the Hangbar, Flight Deck, MetLife 50 Club, and the Lower Prime Club.

The EY Coaches Club, a private, on-field deck behind the bench, is found on the plaza level through the Bud Light Gate. It includes all-inclusive concessions and non-alcoholic beverages.

To manage your Jets tickets, the team has a mobile app available on the App Store and Google Play. The app is also used for mobile entry into the venue. The Jets require ticket holders to use mobile tickets to enter MetLife Stadium, and it is suggested to add the ticket to your phone’s mobile wallet to avoid slow WIFI or cellular signal while entering the stadium. Screenshots of the dynamic barcode on the ticket will not be accepted.

How Much Are 2021 New York Jets Tickets

On the primary market, tickets are available in every level and in most sections, from $59 for the lower-demand games like the Bengals and as much as $89 for the Patriots games and $93 for the January 2nd game against former Patriot and current Super Bowl champ, Tom Brady.  There are unsold 'face value' tickets available in almost every section for every game.

Based of the game, prices on the secondary market are either in line or below primary prices, so it's important to shop around to find the right ticket at the right price.  For the Buccaneers game, the cheapest NO FEE TICKET on TicketIQ is $106 (VIEW BELOW),  while the cheapest ticket directly from the Ticketmaster as of June 1st is $110, after Fees. 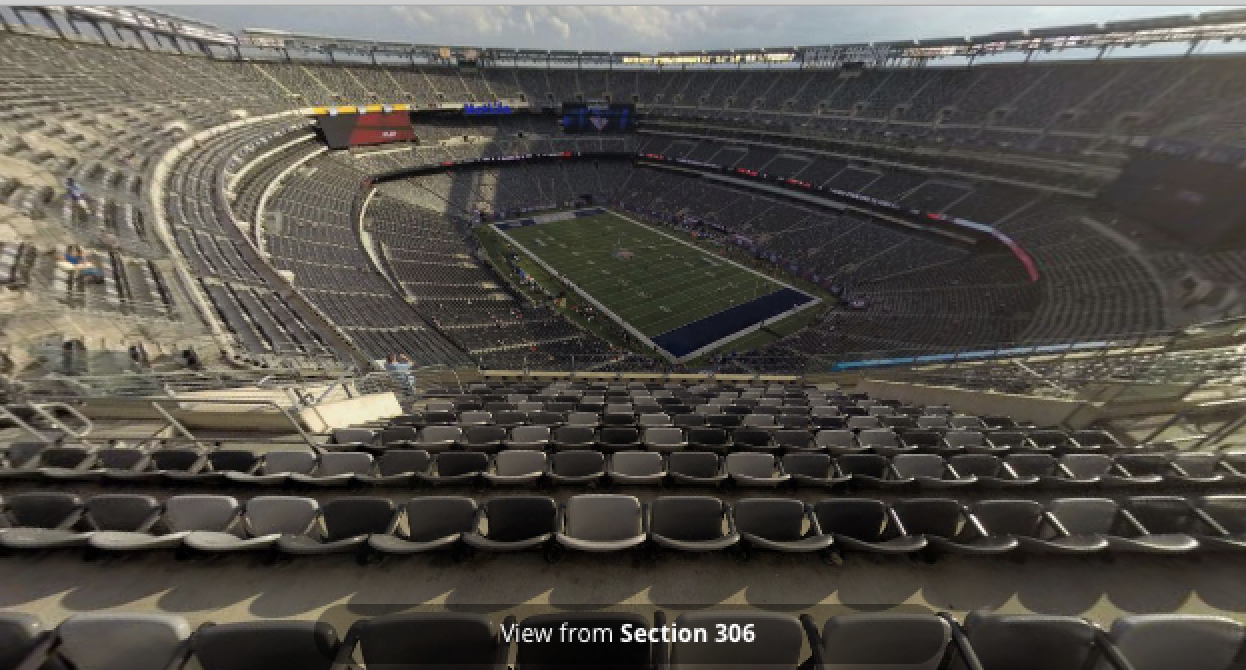 It was recently announced that the New York Jets plan on hosting fans at full capacity for their 2021 home games at MetLife Stadium.

It was also reported recently that 30 of the 32 NFL teams already have approval for full capacity at stadiums at the start of the 2021 preseason. The Denver Broncos and Indianapolis Colts have yet to get approval, but both teams are reportedly "on track".

Those who purchase season tickets will receive the following amenities: food, beverage, and merchandise credit, presale offers, and savings of up to 25 percent at the Jets Flagship Store and online at JetsShop.com.

There are no mini plans available, but group discounts can be used for groups of up to 350. The Jets can guarantee all their seats together after placing a deposit.

The Jets are welcoming fans back to Training Camp in the summer of 2021. Fans will be able to attend public practices at the Atlantic Health Jets Training Center, the annual Green & White Practice at MetLife Stadium, and the team's joint practice with the Philadelphia Eagle in late August.

Free Mobile Tickets Are Available to download beginning on Wednesday, July 14 via the team's website and Ticketmaster.

On July 20th, New Jersey Governor Phil Murphy announced that his Executive Order limiting outdoor public gatherings would apply to event at MetLife Stadium. Meaning that Giants and Jets games will be played without fans for the 2020, and that the policy will remain in place "until circumstances change".

Below is a statement from both the Giants and Jets: 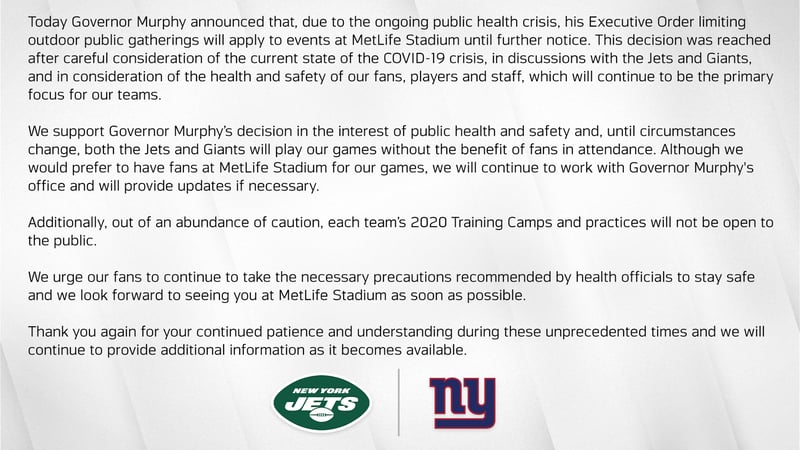 Where To Buy 2019 Jets Tickets

How Much Are 2019 Jets Tickets

On the primary market, the cheapest tickets start at $55 and $58, respectively, for the Miami Dolphins and Oakland Raiders games. Seats are in the 300 sections. The cheapest face value tickets for the opening game against the Bills starts at $62, with tickets against the Browns going for $68 for tickets in section 347.  Those prices are cheaper than tickets on major secondary marketplaces like StubHub. For the Cowboys game, the cheapest face value tickets in $110, which is also slightly cheaper than prices on the secondary market. Club seats for the Cowboys game in the United and Toyota Club sections start at $280. For the Giants game, the cheapest face value ticket is $106.  After the Giants game, prices drop down for the remaining home games, starting at $58 for the Raiders game, $55 for the Dolphins game. Club seats for the Dolphins game start at $222. The final home game against the Steelers starts at $85.

*2018 Jets ticket price article is below*

Since their a big win against the Lions on Monday night the Jets head into their home opener flying as high as recent memory allows. Behind Sam Darnold’s stellar coming out performance in Detroit earlier this week, Jets tickets for their season opener against their 1-0 AFC East rival Dolphins are up 12% on the  secondary market.  Overall season prices for 2018 Jets tickets on the secondary market are up even more, having gone up 15% this week across all home games at MetLife Stadium, with prices starting from $30-40 for most games.  The Patriots game on November 25th is the most expensive game with prices starting at $90. 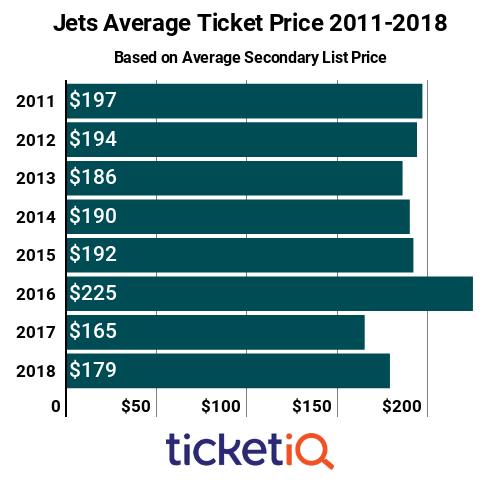 In comparison to other New York events, a ticket to see the Jets will be a great value this season. Watching Darnold progress in the team’s West Coast offense behind an improved offensive line, would be well worth the price of admission. Single-game tickets on the primary market are available for all games, though they are limited for both the November 25 New England and December 23 Green Bay games. But fans can get into MetLife Stadium to see a game against Houston for less than $30. For secondary market listings, TicketIQ offers a Low Price Guarantee for all of the games listed below. As on the primary market, the Patriots and Packers games are the priciest – both games have average asking prices of more than $200 on the secondary market – but great seats are available for all games.

Prices For Each Game on 2018 New York Jets Schedule:

You’d think we’d all have Patriots fatigue by now, but the Boston-New York sports rivalry continues to thrive. Surprisingly, neither the Patriots nor Dolphins games are the most expensive this season at MetLife Stadium. That honor goes to the Packers, who, though not the Jets biggest rival, are always a big draw. The teams have played 12 times with the Jets holding an 8-4 advantage. Prices for that game will rise or fall depending on whether or not the Jets are in the playoff hunt. 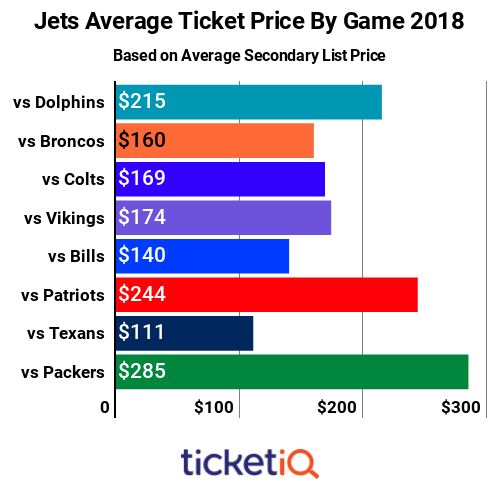 Steelers-Jets Is Most Expensive Week 5 Game