Where to Buy Philadelphia Union Tickets

Single-game tickets for Major League Soccer’s Philadelphia Union are currently on sale directly through the team via Paciolan, and in many cases, the Union is giving fans free tickets to a future game with purchase.

On the secondary market, TicketIQ offers fans a Low Price Guarantee on all sold out Philadelphia Union tickets in addition to Low Price Guarantees on all Major League Soccer tickets. That means that if you find a secondary market ticket for less on a site like StubHub or Vivid Seats, we’ll give you 200% of the difference in ticket credit.  In our efforts to continue to provide our customers with the best deals, we’ve removed all fees.TicketIQ now shows you the full ticket price from the start of your search. TicketIQ customers save an average of 5%-20% compared to StubHub and Vivid Seats.

How Much Are Philadelphia Union Tickets

On the primary market, single-game tickets range in price from $33-$108, depending on location. The cheapest seats are behind the endlines and the priciest are Club Seats, which include a pre-game buffet, access to the Stadium Club, and other amenities.

On the secondary market, TicketIQ shows seats available for all games, including the home opener against San Jose on March 14. Tickets for that game start at $24, and many games are available for $25 or less. The priciest game appears to be against Toronto on July 11, and tickets start at $37.

The average asking price for a Philadelphia Union ticket on the secondary market is $38, up almost 9% over last season, but among the cheapest of the decade, since TicketIQ began tracking data. The cheapest season was 2019, when fans paid an average of $35, and the priciest was $81 in 2011. Across MLS, the Union is the fourth cheapest team, ahead of $26 for Montreal, $34 for New England and $36 for NYCFC. The priciest average in the league is $111 for LAFC. 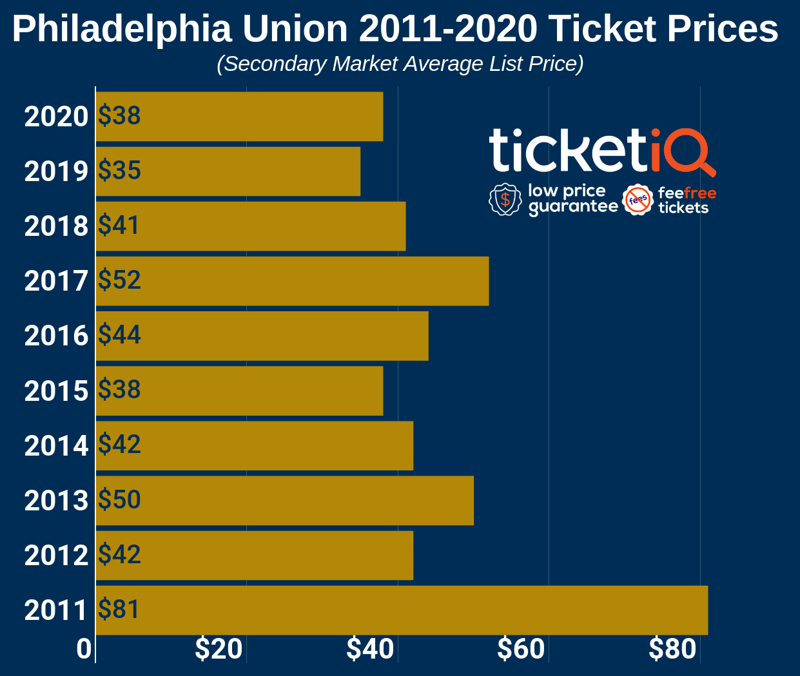 Season tickets are available through the team, and season-ticket holders get up 40% off single-game prices as well as the chance to pay for tickets over time with no interest. Season tickets are available starting at $414 in the River End section behind the net on the Delaware River side, and go up to $6,084 for Presidential Row seats, which are located on the field. One unique option is the Field Side Table Seats, which are located on the sidelines near the team benches, and seating is a table and chairs. Field Side Table season tickets are $3,060.

The Union is also offering partial plans for nine or five games, and fans can pick any games and any seats. The nine-game plan starts at $225, and the five-game plan, which includes a sixth bonus game, starts at $144. Fans get a discount over single-game tickets, discounted pre-paid parking, and other amenities.

The Philadelphia Union has some mobile ticketing options available. Season ticket holders can use the team's account manager to access tickets, as well as sell or purchase additional tickets. Single-game tickets are available via e-mail, regular mail or at will call.