How To Find The Cheapest Rascal Flatts Farewell Tour Tickets

Country pop icons, Rascal Flatts, announced their ‘Farewell: Life is a Highway Tour’ which kicks off June 11th in Indianapolis, IN and closes out October 17th in West Palm Beach, FL. Tickets went on sale to the general public on January 10th. For those who missed out on the initial on sale, there will be a second one on February 21st at 10 am EST.

The Rascal Flatts farewell 2020 tour will feature 25 dates across the US. Discussing their impending breakup, Jay DeMarcus said, “There is no sadness here, just new chapters, new journeys, and new beginnings. Rascal Flatts’ music will live on forever, because of our fans, and this year is all about them!” Rascall Flats have sold nearly 30 million albums since forming in 1999, and 14 of their singles have reached No. 1 on the Billboard Country charts.

Where To Buy Rascal Flatts Tickets

Primary market tickets went on sale via Ticketmaster on January 10th. Presale tickets were only available to Rascal Flatts All Access Memers. For those who missed out on the initial on sale, there will be a second one on February 21st at 10 am EST.

How Much Are Rascal Flatts Tickets

On the secondary market, most dates are currently available. Ticket prices for the tour opener on February 27th in Plant City, Florida, start at $58.  Most other available tour dates start at $61. Most dates have get-in prices in the $75 to $100 range.

Country vocal group Rascal Flatts is celebrating its 20th anniversary with the “Summer Playlist Tour,” that includes special guest Michelle Grigg. It is the group’s 16th tour and criss-crosses the country, hitting venues from Charlotte to Cheyenne, between May 16-October 4.

On tour, Rascal Flatts is known for shows heavy on special effects, including video, pyrotechnics and laser lights. In 2016, the group sold its 10 millionth concert ticket.

Rascal Flatts tickets are available at all venues on TicketIQ.com. The company offers a Low Price Guarantee on all secondary market concert tickets and gives fans a wide variety of tickets to all shows to choose from. The Low Price Guarantee means that if you find a secondary market ticket for less on a site like Stubhub or Seatgeek, we'll give you 200% of the difference in ticket credit.

How Much Are Rascal Flatts 'Summer Playlist' Tour Tickets 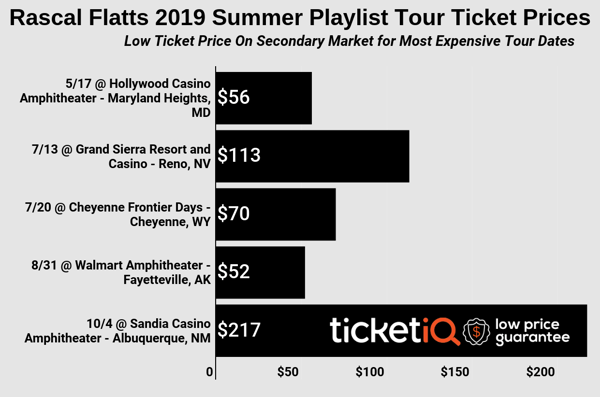 (1/23/15) Currently in rehearsals for their forthcoming Las Vegas residency, country music trio Rascal Flatts have now announced they will hit the rest of North America later this year with the 32-date Riot Tour.

Although no specific venues have been confirmed as yet, the chart-topping outfit have revealed that they will kick off their latest trek in St. Louis on May 29, with Indianapolis, Philadelphia, Cleveland, Toronto, Washington, West Palm Beach and Boston just some of the other cities also scheduled.

Gary LeVox and co., who will be joined on the Riot Tour by 2011 American Idol winner Scotty McCreery, will first take to the stage in 2015 for a nine-date stint at The Joint inside Hard Rock Hotel & Casino Las Vegas, where another talent show victor, The Voice’s Craig Wayne Boyd, will provide support.

Tickets are available on TicketIQ for seven of these performances, including the opening show on Feb 25, all of which have a get-in price of $129. Fans can also get their hands on tickets for a number of their festival sets this year including Kennesaw’s Shaky Boots Festival on May 16 (2-day pass $266), their Columbus hometown’s Buckeye Country Superfest on June 20 ($79, 2-day pass $89), Cadott’s Country Fest on June 25 ($69, 4-day pass $267) and the Willamette Country Music Festival on August 14 (3-day pass $310).

Audiences should expect to hear all the highlights from last year’s number one album Rewind, while their recent tour of the same name also featured previous country chart-toppers “Bless The Broken Road,” “What Hurts The Most” and “Why Wait,” alongside cover versions of Merle Haggard’s “I Think I’ll Just Stay Here and Drink,” Tom Cochrane’s “Life is a Highway” and Waylon Jennings’ “Only Daddy That’ll Walk The Line.”