16-year-old artist and YouTube star has announced she’s adding 50 dates in 2020 to her ‘D.R.E.A.M.’ tour which kicks off March 11th in Colorado Springs, CO and concludes June 6th in North Little Rock, AK.

Jojo Siwa made a name for herself on the Lifetime show, Dance Moms. Afterwards, she released a successful YouTube channel and also has an EP that will be shown via televised concert on Nickelodeon on Friday, November 22nd. Her new D.R.E.A.M. EP includes “Bop!” “Boomerang” and “Only Getting Better.”

Where To Buy Jojo Siwa Tickets

Tickets went on sale to the general public on November 22nd at 10am ET via Ticketmaster.

How Much Are Jojo Siwa Tickets

Primary market tickets for the opener of the extended leg of the 2020 tour start at $52 on March, 11th in Colorado Springs, CO. $69 is the starting price for the April 19th show in Champaign, IL while the closing show in North Little Rock, AR on June 6th starts at $39.50.


TicketIQ is committed to Transparent Ticketing, and we make much less on 'sold out' tickets compared to other major marketplaces like StubHub and Vivid. That means ticket buyers save from as much as 25% on TicketIQ for sports, music and theater tickets. We also back it up with our Low Price Guarantee! We're able to do this because we also work with teams, venues, and other ticket owners, to help them sell tickets at face price, directly to consumers like you, through Ticketmaster, Frontgate, Eventbrite and others ticketing platforms. Learn more by reading our Music Buying Guide that we think is the most objective advice on where to find the best deals on concert tickets, whether they're 'sold out' on TicketIQ or 'unsold' on the primary ticket market.

The tour kicked off May 17 in Phoenix, and will hit Los Angeles, St. Louis, New York, Nashville and other cities before wrapping up the first leg on June 26 in Austin. After a two-week break, he tour then picks back up on July 10th in Orlando  The show leverages the online and TV stars fan base and is produced by Nickelodeon and AEG. For fans that are looking to see JoJo on the road, playing her hits“Boomerang,” “Kid in a Candy Store,” “Hold The Drama,” and “High Top Shoes” the secondary ticket market is the only options show the first leg of the tour the, as the first set of shows is sold out on Ticketmaster.com.

How Much Are JoJo Siwa 2019 Tour Tickets 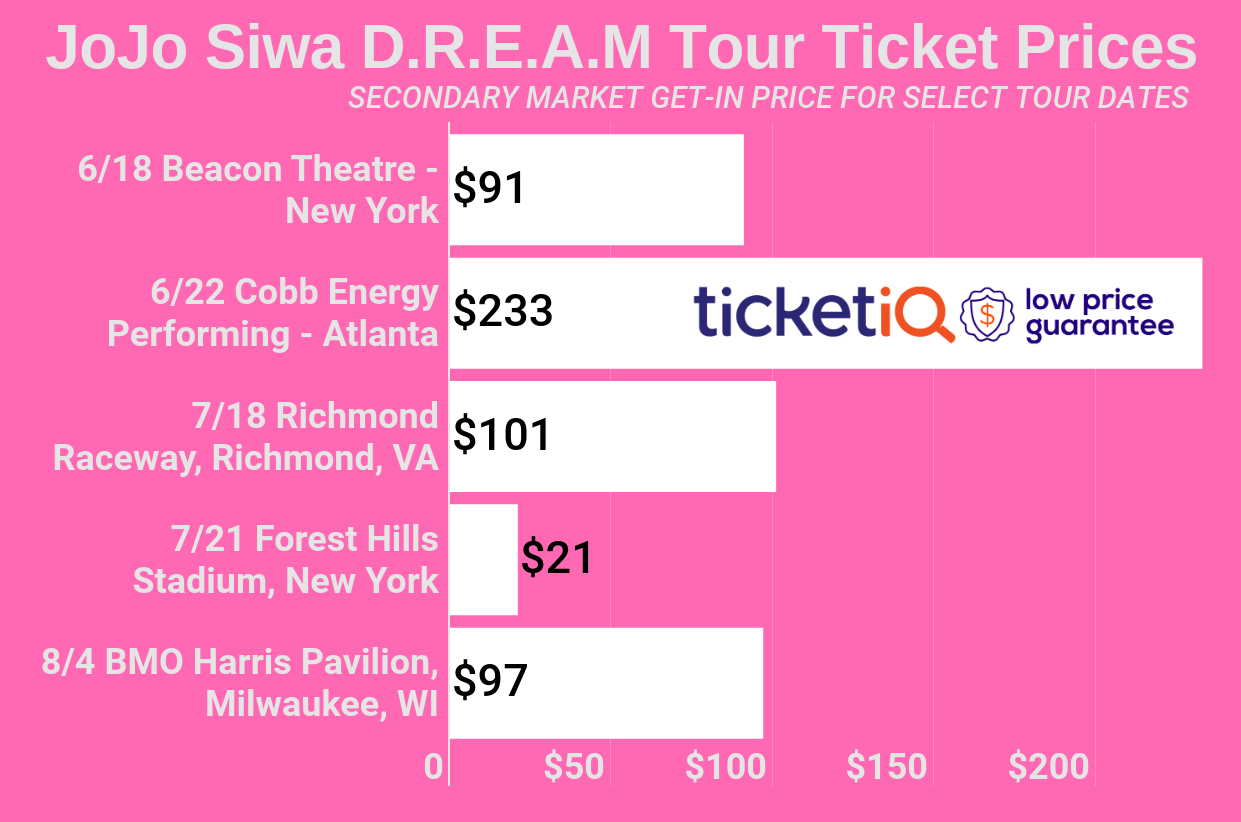 Siwa plays four shows in the New York City Metro, including a show at the historic Beacon Theater, where tickets start at $91, with orchestra/floor seats going for around $250.   She also plays the Prudential center, which is one of the largest venues on the JoJo Siwa D.R.E.A.M. The Tour, where tickets start from $65. Floor seats in Newark are a reasonable $125.

For her Florida swing, Orlando, the former home of Nickelodeon Studios was a television taping studio as well as an original family attraction at Universal Studios Florida. Siwa, who gained fame via TV shows, mostly on Nickelodeon and Dance Mom's, and is known for wearing large, colorful bows, will bring her high-energy act to fans across the country, most of which are likely part of her 8 million instagram followers and 10 million Youtube subscribers--referred to Siwanatorz.  The three-time Nickelodeon Kids' Choice Award winner posted this Tour Q&A on her channel two days prior to the start of the tour.

For fans interested in VIP options, there are also some tickets available for the second leg of the tour, the most expensive of which is detailed below.

THE D.R.E.A.M. VIP Meet and Greet Experience - $228.50 - includes one top price reserved ticket, an invitation to the VIP Hang with JoJo Siwa - includes one photo and Q&A session with JoJo Siwa - and early access to the merchandise booth. Package also includes one limited edition Glam Bag in special gift box, one commemorative laminate and matching lanyard. Adults attending the Meet & Greet must also purchase the VIP Meet & Greet package in order to guarantee a seat next to their child during the show. 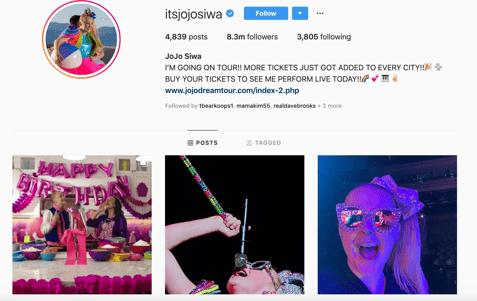