Where to find cheapest UFC 244 Tickets at MSG 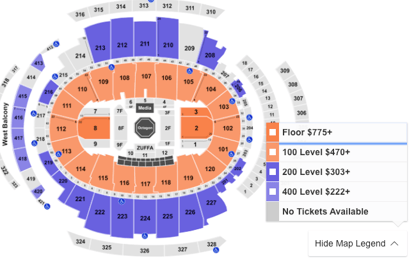 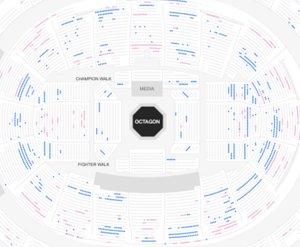 On the secondary market TicketIQ will offer fans a Low Price Guarantee on sold out UFC and Fight Tickets in addition to Low Price Guarantees on all sold out all sports, music and theater tickets. That means that if you find a secondary market ticket for less on a site like StubHub or Vivid, we’ll give you 200% of the difference in ticket credit. TicketIQ customers save up to 25%.

TicketIQ is committed to Transparent Ticketing, and we make much less on sold out tickets compared to other major marketplaces like StubHub and Vivid. That means ticket buyers save from up to 25% on TicketIQ on sports, music and theater. We're able to do this because we also work with teams, venues, and other ticket owners, to help them sell tickets at face price, directly to consumers like you, through Ticketmaster.

UFC 229 Tickets Are Second Most Expensive UFC Event This Decade

Currently, the cheapest ticket on TicketIQ is going for $729, almost 400% above the face price of $205.   That's up $150 since the onsale. It's also now the second most expensive UFC event tracked by TicketIQ this decade.  Perhaps most impressively, it's also the most expensive UFC event we've ever tracked in in Las Vegas. It's not, however, sold out, with ticket remaining for $2,500 directly from T Mobile Arena's site.

As you can see in the below screen shot, floor seats start at not-terribly-expensive $3,011 on TicketIQ with, and it be interesting to track how prices on the floor move as the event approaches.  There are even some floor seats still available from T Mobile arena, for $2,700. For anyone looking to sit on the floor or at 'center ice', the primary market is a better options, with tickets at $2,500 compared to $3,000 on the secondary market. For someone just lookin to get in, the secondary market is by far the cheaper option, with tickets starting under $750.

In addition to being driven by the excitement for the matchup, interest in certainly stoked as the result of the recent legalization of gambling in states all around the country. While it's likely to have a bigger impact on pay per view demand than ticket prices, the awareness it creates is enough to turn it into a hot Vegas tickets. Based on the cheapest ticket available on the secondary market, this is the 7th most expensive event ever in Las Vegas, the pay per view capital of the country.

Of those top 10 events, eight have taken place at T Mobile Arena, which was opened in 2016.

For MacGregor, it's his first time in the Octagon since he won the belt he won at UFC 205 back in 2016, in New York City.  Not surprisingly, that event ranks as the most expensive in UFC history.  With prices rising for UFC 229, it's not out of the question that 229 takes over the top spot before the October fight night.