Winner of the TV show “Nashville Star” in 2006, country singer Chris Young will continue his U.S. tour this summer starting June 13 in Syracuse and wrapping up September 12 in Jacksonville, Florida. Young will hit mostly medium-sized cities. “Raised on Country,” released earlier this year, is his eighth studio album.

Where To Buy Chris Young Tickets

Most shows are 40-60% sold out via primary market vendor Ticketmaster, though the June 29 show at the Stir Concert Cove in Council Bluffs, Iowa is nearly a sellout for the 3,500-seat venue. The entire venue is standing-room only.

For sold out concert or seats, TicketIQ has Low Price Guarantees on all concert tickets. We offer a Low Price Guarantee on music, sports and theater tickets, which means that if you find a secondary market ticket for less on a site like Stubhub or Seatgeek, we'll give you 200% of the difference in ticket credit. TicketIQ customers save an average of 5%-20%.
Among the higher-interest shows is the August 10 date at Irvine, California's FivePoint Amphitheater. The show is about 80% sold out, but among the available primary market tickets are "VIP Hot Seat" tickets in the Orchestra section, beginning at $155. These tickets include reserved seating, a VIP gift, early entry to the venue and more. Similar tickets on the secondary market are available starting at $160, and there is a wider selection of seats, meaning fans should shop around.

How Much Are Chris Young Tickets

One of the best deals on the tour is the July 11 show at the Hollywood Casino Amphitheater at Maryland Heights, Missouri, where fans can get in via the secondary market for as little as $28 in the Upper Mezzanine or treat themselves to a spot in the Center Rear Orchestra starting at $89. For comparison, primary market tickets for this show start at $58 for the Upper Mezzanine.

Below are the higher-interest shows with secondary market ticket get-in prices of $40 or more: 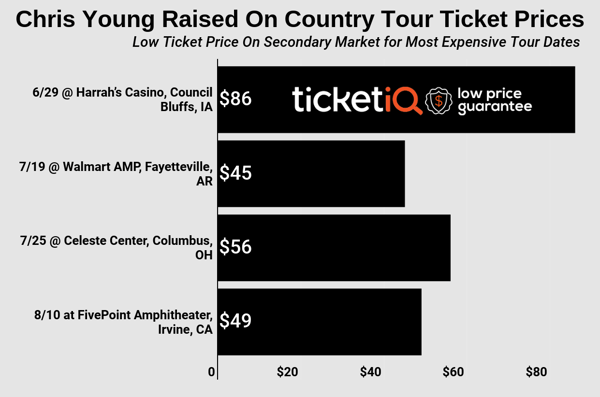 Chris Young and Lee Brice kicked off one of the first major country music package tours of 2015 last night in front of a sell-out crowd at Syracuse’s War Memorial.

The two singer-songwriters, who first shared the stage during Brad Paisley’s Beat This Summer trek back in 2013, played back-to-back one-hour sets in the first of nine co-headlining dates scheduled over the next two months.

The pair will next perform together at Mashantucket’s Foxwoods Resort Casino tonight (January 23) before moving onto Jonesboro’s Arkansas State University Convocation Center on February 6 – tickets for which are available on TicketIQ at a get-in price of $106.

Last night’s opener saw Brice perform a brief solo acoustic set as well as renditions of “I Drive Your Truck,” “Friends We Won’t Forget” and “Drinking Class,” while Young also threw in covers of ZZ Top’s “Sharp Dressed Man” and The Doobie Brothers’ “China Grove” in with his own numbers such as “Text Me Texas” and “Who’s Gonna Take Me Home.”

2019 Concerts: How To Get Best Deals On Tickets, from Cheap Seats or Floor Seats

Dave Matthews Band announced their North American 2020 Summer Tour dates which kicks off June 16th in Ucasville, CT and closes out September 23rd in Southaven, MS. Tickets go on sale to the general…