One of the best things about being a soccer fan is following the sport’s year-round calendar. Major European domestic leagues recently ended, international tournaments—from the Women’s World Cup to the Copa America—are either underway or about to begin, and transfer news is swirling.

If you’re ready to get in on the action yourself, the CONCACAF Gold Cup, the regional tournament of North America, Central America, and the Caribbean, is kicking off June 15. While the tournament is being co-hosted by the United States, Jamaica, and Costa Rica, the vast majority of the games will take place across the USA. Whether you’re a die-hard soccer fan looking to see some lesser-known players or a newer fan looking to see what the fuss is about, the Gold Cup is a great opportunity; tickets on the secondary market are affordable, with get-in prices averaging $56 across the entire tournament.

There are 16 teams in the tournament broken up into four groups. Group A consists of Mexico, Canada, Martinique, and Cubs; Group B is made up of Costa Rica, Haiti, Nicaragua, and Bermuda. Honduras, Jamaica, El Salvador, and Curacao fill out Group C while the United States, Panama, Trinidad and Tobago, and Guyana are in Group D. After group play, the top two teams from each pot advance to knock out play, with the final taking place July 7 at Chicago’s Soldier Field.

If you buy tickets to any of the group stage sessions, you actually get a doubleheader; while you’ll have to make sure you’re seeing the match-ups you want, you will definitely see all four teams in the group play.

TicketIQ has a Low Price Guarantee on 2019 Gold Cup tickets for all matches, in addition to Low Price Guarantees on all sports tickets, which means that if you find a secondary market ticket for less on a site like Stubhub or Seatgeek, we’ll give you 200% of the difference in ticket credit. TicketIQ customers save an average of 5%-20% compared to Stubhub and Seatgeek. Download the TicketIQ app for $20 off your first ticket purchase 📲 🎟️

Group A will play their first game in the Rose Bowl, their second game in Denver’s Broncos Stadium, and their third game in Charlotte, North Carolina at Bank of America Stadium. For all three games, tickets are available on Ticketmaster for as low as $35 on the primary market for seats in the upper corner; prices increase by increments of $5 as you move closer to the center of the field.


Group B first takes the field in Costa Rica’s National Stadium, followed by Toyota Stadium in Frisco, Texas, and Red Bull Arena in Harrison, New Jersey. Tickets to the first game are available on Specialticket.net with plenty of availability; ticket to the game in Dallas can be purchased through FC Dallas and, while there aren’t too many seats still available, range in price from $25 to $125. The game in New Jersey has plenty of seats available on Ticketmaster and follow the same pricing trend as Group A’s games.

The games in Group C take place in Jamaica’s National Stadium, BBVA Compass Stadium in Houston, and Banc of California Stadium in Los Angeles. Tickets for the first game can be found on Caribtix.com. The second game actually appears to be sold out while the third game has limited seats available—beginning at $106.

Lastly, Group D wraps up pool play in St. Paul’s Allianz, Cleveland’s First Energy Stadium, and Kansas City’s Children’s Mercy Park. Tickets for the first and last games are available on SeatGeek starting at $70 and $51 respectively, while tickets for the game in Cleveland start at $35 on Ticketmaster.

After group play, there will be two quarterfinal sessions, two semifinals, and one championship game. All of those games take place in NFL stadiums—NRG Stadium, Lincoln Financial Field, State Farm Stadium, Nissan Field, and Soldier Field—meaning there are a great deal of seats available on Ticketmaster. Tickets to the quarterfinals begin at $30, semifinal seats begin at $35, and tickets to the final start at $50. 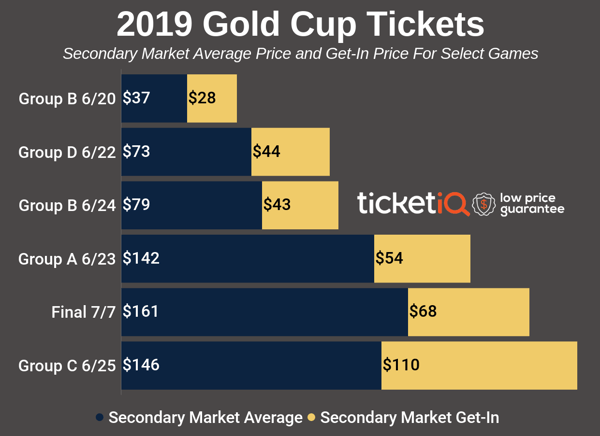 While you can’t buy resale tickets for any of the games abroad, tickets are available on the secondary market for all of the games in the United States; most match days have a get-in price hovering between $40 and $60. On the whole, that price range is slightly more expensive on the get-in prices on the primary market, with one main exception. Group C’s second session—El Salvador vs. Jamaica and Honduras vs. Curacao in Houston’s BBVA Compass Stadium—is sold out on the primary market; you’ll need resale tickets to get in and the cheapest are currently $83.

On the whole, where you go for tickets will likely be determined by two factors: where you want to sit and when you’re shopping. While get-in prices are cheaper on the primary market, prices can vary drastically between sessions and games. It will definitely pay to shop around if you have a specific view in mind; if you simply want to get into the building, the primary market is probably a safe bet.

The second factor—especially for the latter elimination games—is the time of your purchase. Given the unpredictability of sports, it’s hard to know how the bracket will shake out, but some conclusions are pretty safe. While it’s easy to assume that Mexico and the United States will win their groups, tickets to quarterfinals featuring one of those squads will likely be cheaper now than once the teams are confirmed, if you’re willing to gamble. Likewise, a major injury or freak result could tank the value of the championship game.

No matter which game you pick and where you buy your tickets, though, the Gold Cup is a great chance to check out some international soccer at a reasonable price. And with some smart shopping and a little foresight, you’ll be able to see virtually any team you want as affordably as possible.

TicketIQ is committed to the cheapest tickets possible, and we make much less on sold out tickets compared to other major marketplaces like StubHub and Vivid. That means ticket buyers save from up to 25% on TicketIQ on sports, music and theater. We're able to do this because we also work with teams, venues, and other ticket owners, to help them sell tickets at face price, directly to consumers like you, through Ticketmaster, Seatgeek and other primary ticketing platforms. You can read our new MLS ticket Buying Guide that we think is the most objective advice on where to find the best deals on summer concert tickets, whether they're 'sold out' on TicketIQ or 'unsold' on the primary ticket market.

The USA will not be advancing to the Gold Cup Final. The US dropped a semifinal match to Jamaica 2-1, sending Jamaica to its first Gold Cup Final. In the final they will take on Mexico, who defeated Panama, also by a score of 2-1. There is enough demand, mostly surrounding Mexico, that prices for Gold Cup Final tickets have risen slightly on the secondary market. The current average price of the match, which will take place Sunday night at Lincoln Financial Field, is $178.55, up 8% from its pre-semifinal average. The current get-in price is $45, though that has dropped from $53.

On Saturday, the US and Panama will play a third-place match at PPL Park in nearby Chester, PA. The current average price for the third place match is $81.07 with a get-in price of $22.

Four countries now remain in the Gold Cup tournament. Each of the four will be in action on Wednesday for the semifinals at the Georgia Dome in Atlanta. Gold Cup tickets will be single admission for a double header, which features matches between the USA and Jamaica and Mexico against Panama. The current average price for the semifinals is $335.32 with a get-in price of $115 on the secondary market. Those prices will be more expensive than the final on July 26 at Philadelphia’ Lincoln Financial Field. Gold Cup Final tickets have an average price of $186.39 and a get-in price of $71.

Eight countries remain in the CONCACAF Gold Cup. The Quarterfinals for the tournament will take place this weekend in Baltimore. While the United States will participate in one of the matches at M&T Bank Center, it will be the less expensive of the two days. Gold Cup tickets in Baltimore currently have an average price of $68.32 and a get-in price of $33 on Saturday, July 18. Tickets will have single admission for two matches, United States against Cuba and Haiti against Jamaica. On Sunday, Trinidad & Tobago will take on Panama in addition to Mexico against Costa Rica. Tickets for the matches at MetLife Stadium currently have an average of $105.50, but the same get-in price at $33.

The semifinals will be held on July 15 at the Georgia Dome. Semifinal doubleheader tickets have an average price of $145.36 and a get-in price of $42.

(UPDATE 7/3/15)  With just one day before the 2015 CONCACAF Gold Cup is set to kick off, there have not been big overall changes in prices on the secondary market. The current overall average for Gold Cup tickets against all matches is $120.77. The three US matches are just below that price at an average of $113.02. Two days after the women’s team won the World Cup, the US will take part in the opening day of the Gold Cup. Along with a match between Panama and Haiti, the US will take on Honduras at Toyota Stadium. The current average price for the match is $173.72 with a get-in price of $87.

The U.S. men’s national soccer team on Tuesday revealed its 23-man roster for the 2015 Gold Cup. Fronted by captain Clint Dempsey, the team will look to claim its second consecutive Gold Cup title after defeating Panama in the Final of the 2013 tournament.

Twelve players on the 23-man roster hail from Major League Soccer while natives of England, France, Mexico, Germany and the Netherlands make up the remaining eleven spots. View the complete roster below, along with each member’s current team:

The US Men’s National Soccer Team is riding high off a 2-1 win over Germany, the 2014 World Cup champions. USMNT came from behind, down 1-0, to pull off a win in an international friendly. That comes less than a week after their first win ever against the Netherlands, a 4-3 victory in Amsterdam.  Following their successful trip to Europe, the US will ride high into the CONCACAF Gold Cup next month. With excitement abound, and matches being played in the U.S. and Canada, prices are high on the secondary market.

The average price of U.S. Gold Cup tickets over the team’s first three matches is $106.80 on the secondary market. The U.S. will play in the most expensive match of the entire tournament when it takes on Honduras on July 7 at Toyota Stadium in Frisco, Texas. U.S. vs Honduras tickets have an average price of $150.66 on the secondary market, 41% more expensive than the overall average across all three U.S. matches.

Haiti will be the second U.S. opponent on July 10 at Gillette Stadium. The current average price is the least expensive of the three matches at $88.82. The get-in price is just $37. The U.S. finale in group play will be on July 13 at Sporting Park in Kansas City. U.S. tickets against Panama have an average price of $115.33 and a get-in price of $56.

A July 15 Group C match featuring Cuba against Guatemala and Mexico against Trinidad and Tobago will be close to the average of the first U.S. match of the tournament. At an average of $150.66, it will be the only other match above $150. However, the get-in price is just $34.

On July 22 a doubleheader for the semifinals will be held at the Georgia Dome in Atlanta. The current average price to watch both matches is $128.10 with a get-in price of $35. The Final will be played four days later at Lincoln Financial Field in Philadelphia. The current average price for Gold Cup Final tickets is $143.48 with a get-in price of $38.

2020 Regular Season Update Return To Season Schedule  Major League Soccer has revealed their schedule for the first phase of the return to play for the 2020 regular season.  The continuation of…