Major League Soccer has revealed their schedule for the first phase of the return to play for the 2020 regular season.  The continuation of the season will have three phases and see each team will play an additional 18 regular-season games, with the first phase having most teams play six matches against regional opponents. This phase will run though September 14th.  The only exception to this is FC Dallas and Nashville SC who will play an additional three games to make up for those missed having to withdraw from the MLS is Back Tournament.

That means that if you find a secondary market ticket for less on a site like StubHub or Vivid Seats, we’ll give you 200% of the difference in ticket credit.  In our efforts to continue to provide our customers with the best deals, we’ve removed all fees.TicketIQ now shows you the full ticket price from the start of your search. TicketIQ customers save an average of 5%-20% compared to StubHub and Vivid Seats.

On the secondary market, TicketIQ has seats available for all games for as little at $24. The highest-interest game of the season is the Audi Field finale against Atlanta United on October 4, which is sold out on Ticketmaster. The cheapest seat on TicketIQ is $48. The game is one of five with a get-in price of $40 more. The other 15 games are cheaper, and the cheapest looks to be $26 on April 15 versus FC Toronto — making it cheaper to buy on the secondary market than the primary. Ticketmaster’s cheapest seat for this game is $30.

Overall, the average asking price for a DC United ticket is $50, up from an average of $48 last season. This year’s average asking price is the fourth priciest since 2013, when TicketIQ began tracking data. The highest average as $73 in 2018, when it finished fourth in the Eastern Conference. 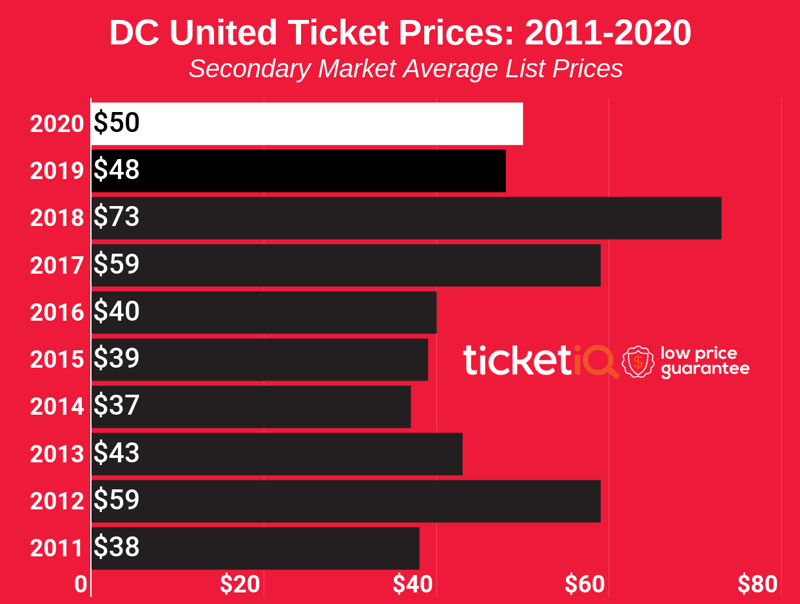 What Are D.C. United's 2020 Season Ticket and Mini Plan Options

Season tickets on the primary market are available in the 100 sections, and the highest-priced package is $4,500 for seats in either Section F8 or F9 at midfield behind the team bench. Season-ticket holders can save up to 30% over single-game prices, get access to a members-only gate into the stadium, and are invited to exclusive events. The team also has premium seating in clubs and suites around Audi Field, starting at $2,500 and including food-and-beverage service.

What can you bring into Audi Field

A clear bag that does not exceed 14 x 14 x 16 inches is permitted in the stadium. Fans can also use keyless lockers at the stadium for a fee.

You can also view a PDF breakdown of their prohibited and permitted items policy directly from the team here.