Dierks Bentley has announced plans for his upcoming 'Beers On Me' tour. Parker McCollum, Riley Green, and Mitchell Tenpenny will join Bentley on tour, which is set to begin on August 13th at USANA Amphitheatre in Salt Lake City, Utah, and run through October 22nd in Rogers, Arkansas at Walmart AMP.

Where To Buy Dierks Bentley 'Beers On Me' Tour Tickets

Primary market face-value tickets go on sale to the general public on Friday, May 14th at 10 a.m. PDT via Ticketmaster. The Dierks Bentley Fan Club Presale and Citi® Cardmember Presale are taking place earlier in the week and start on Tuesday, May 11th at 10 a.m. PDT and run until Thursday, May 13th at 10 p.m. PDT

How Much Are Dierks Bentley 'Beers On Me' Tour Tickets

On the secondary market, ticket prices for most show start between $85 and $100 per seat. For pit sections and sections closest to the stage, prices range from $300 to $700 per ticket.

Country singer Dierks Bentley opens his 14th tour, this one along with Jon Pardi and Tenille Townes, on May 30 in Cincinnati. The show crisscrosses the U.S. and wraps up on September 8 in Wheatland, California.

Where To Buy Dierks Bentley Tickets

Most shows are about 50% sold out on the primary market, though some shows are sold out on Ticketmaster, as are several dates during a June stint in Nashville that is part of Marty Stuart’s Late Night Jam and CMA Fan Fest Fair.

For sold out concerts, TicketIQ has Fee Free tickets for all concerts.

How Much Are Dierks Bentley Tickets 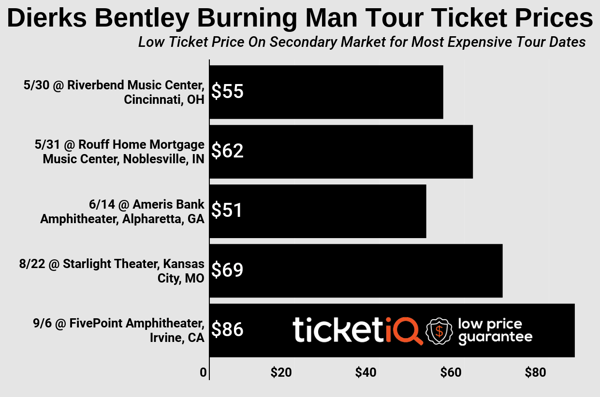 For fans near Atlanta, the June 14 show at Ameris Bank Amphitheater shows that fans have lots of options and should shop around. Tickets on the lawn start at $40.25 on the primary market, and in the Orchestra are available from $263 as part of the "Seven Peaks VIP Package," which includes seats in the first 20 rows, a pre-show  performance, appetizers and more. Seats in that same area without the package are available starting at $157 on the secondary market.

For that August 22 date, fans can get still get tickets directly through the Starlight Theater, starting at $50.75.  There's also a wide choice of tickets available on the secondary market for this show, including Box Seats starting at $175. If fans purchase two or more Box Seats, a parking pass is included, and access to a VIP Lounge is included with every Box Seat ticket.

Below are the higher-interest shows with secondary market get-in prices of $50 or more:

Dierks Bentley Announces Cities For The "Sounds Of Summer" Tour

Country singer Dierks Bentley is going out on tour this summer after finishing his “Riser Tour” last year. The “Sounds of Summer Tour” features opening country acts Maddie and Tae, Kip Moore, and Canaan Smith. There are no specific dates or venues announced yet except that the 40-date tour will start on June 5th in Raleigh, North Carolina venue to be announced. Several of these dates are part of the Country Megaticket tour and will feature many other of country music’s most popular and talented singers. Some major stops include New York City, Boston, Philadelphia, Denver, Phoenix, Chicago, Charlotte, and San Diego. Dates part of the Country Megaticket will go on sale on the 26th, other dates on the “Sounds of Summer Tour” will be announced as it gets closer. Dierks Bentley will undoubtedly still play songs from his 2014 album Riser though fans should still expect to hear some older hits as well. Canaan Smith, Kip Moore, and Maddie and Tae also put out some new material last year. A list of announced cities can be found below, fans be on the lookout for date and venue announcements.

Dropkick Murphys and Rancid have announced plans for a co-headline tour for the summer and fall of 2021. The Boston to Berkeley II tour was originally scheduled for May of 2020 but had to be…

How To Find Cheapest The Jonas Brothers Tickets + On Sale News

How To Find The Cheapest Lollapalooza Tickets + 2021 Lineup

How to Find Cheapest Tickets for Hometown Rising Festival + 2020 LineUp

How to Find Cheapest Tickets for TrailBlazer + 2020 LineUp

How to Find Cheapest Tickets for Country Thunder Florida + 2020 LineUp