Where To Buy FC Dallas Tickets

A limited number of single-game tickets on the primary market for FC Dallas First Phase of the resumption of the 2020 regular season will be available via the team's website. Based on current guidelines, only 5,110 fans will be allowed to attend. So far, only tickets for the opening game will become available and fans will be required to wear a face mask at all times.

On the secondary market, TicketIQ offers fans a Low Price Guarantee on all sold out FC Dallas tickets, in addition to Low Price Guarantees on all Major League Soccer tickets. That means that if you find a secondary market ticket for less on a site like StubHub or Vivid Seats, we’ll give you 200% of the difference in ticket credit.  In our efforts to continue to provide our customers with the best deals, we’ve removed all fees.TicketIQ now shows you the full ticket price from the start of your search. TicketIQ customers save an average of 5%-20% compared to StubHub and Vivid Seats.

How Much Are FC Dallas Tickets

On the primary market, seats for the February 29 season opener against the Philadelphia Union start at $14 for a seat in the 100 Sections along the sideline. The priciest seats for the game are $65 in Sections 105, 106, and 107 at midfield.


On the secondary market, the overall average asking price for a ticket to see FC Dallas on the secondary market is $42, making it one of the best deals of the decade. The cheapest season cost fans an average of $34 in 2019, and the priciest was an average of $78 in 2015, when they won the Western Conference and got to the Conference Finals before losing to Portland. 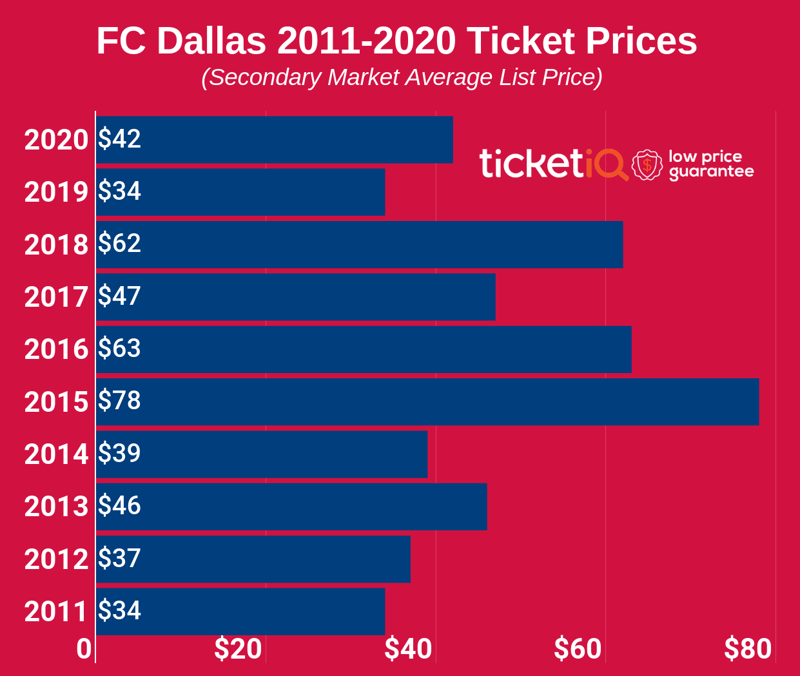 Season ticket holders get access to two clubs at the stadium, as well as free parking and access to match-day giveaways. Season tickets are available in select sections and start at an average of $25 per game for seats in Section 101 on the sideline at the goal line to $55.50 in Section 107 at midfield behind the team benches.

Flexible plans allow fans to select which games they want to attend and where they want to sit. A minimum of three games must be selected, and only packages of four or more can include a premium game against a top-tier opponent. Prices vary depending on the number of games and seat location.