Where To Buy 2021 Houston Dynamo Tickets

Dynamo FC has yet to release its 2021 MLS schedule, but fans can sign up to show their interest in single-game tickets by filling out this form on the team website. The 2021 MLS season is set to kick off with its opening weekend on April 3 and 4. Primary market tickets will be available via Seatgeek.

Currently, a six-game pack is available starting at $185 per ticket. The partial plan includes the home openers for both the Dynamo FC and the NWSL’s Houston Dash in addition to four select Dynamo FC games. Fans who purchase this plan also receive a four-by-six-foot fleece blanket.

BBVA Stadium in Houston, Texas allowed 3,000 fans (14 percent capacity) for part of the Dynamo FC’s 2020 season. The stadium can regularly hold up to 22,039 fans. Information regarding capacity limits should be updated as we draw nearer to the opening weekend of the MLS season.

Where to Buy 2020 Houston Dynamo Tickets

Single-game primary market tickets for Major League Soccer’s Houston Dynamo are available via AXS. Season tickets are not listed as an option to purchase on the team website. Houston opens its season February 29 agains the L.A. Galaxy, and it plays home games at NNVA Stadium.

On the secondary market, TicketIQ offers fans a Fee Free Houston Dynamo tickets. In our efforts to continue to provide our customers with the best deals, we’ve removed all fees.TicketIQ now shows you the full ticket price from the start of your search. TicketIQ customers save an average of 5%-20% compared to StubHub and Vivid Seats.

How Much Are 2020 Houston Dynamo Tickets

On the primary market, seats to eight home games can be had for $12 or less, including tickets for $7 to the Thursday, August 20 “Texas Derby,” against FC Dallas. Fans can get a spot high up on the corners for $7, while the priciest section is $165 for Field Seating. For the season opener on February 29 against Los Angeles, fans can get seats on the 200 Level for $20. Club seats and field seating for this game are sold out on the primary market.

Among other higher-interest games, it will cost fans $35 to get in the stadium for the Saturday, March 14 game against Seattle, which includes a t-shirt giveaway, and Saturday, June 13 against Atlanta United, which is Tab Ramos Bobblehead night.

On the secondary market, the cheapest game is Wednesday, April 15 against Minnesota United. Fans can get a seat in Section 222, Row B on the corner for $15. Field seating for this game starts at $92. Fans can get into the season opener against the Galaxy for $40 in the General Admission 200 Sections behind the goal, or $222 for a seat in Row B, Section VIP Club 106 right behind the team benches.

Overall, the average asking price on the secondary market for a Houston Dynamo home game is $48, up $1 over last year’s average, but the fourth cheapest since 2011, when TicketIQ began tracking data. The priciest season was $68 in 2018, and the cheapest was $43 in 2011. 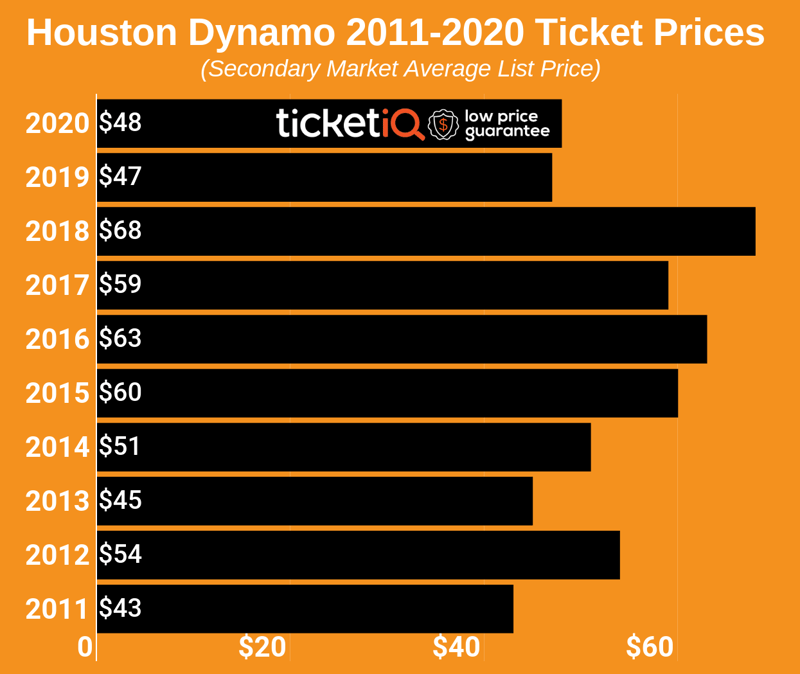 The Dynamo and BBVA Field invite fans to use digital ticketing through Flash Seats, which allows fans to buy, sell or transfer tickets. Fans can download the Flash Seats app via iTunes or Google Play.

How To Find The Cheapest Kentucky Derby Tickets + 2021 Attendance Policy