These spaces are first-come, first-serve and while there are no seats to sit in, two of the SRO areas have couches and televisions where you can sit and watch the game on TV. Below is a video we did on the most popular SRO areas at AT&T Stadium.  We thought the Miller Lite Landing on the 300 level, which like the Pepsi Fan Deck has TVs and Couches, as well as access to bars without lines.  Dr. Pepper Platform doesn't have any couches to sit on, but it has a very cool Star Bar.  While the Ford Deck has a cool fountain, it feels more like a car dealership than a football stadium.

Tap the image of the Pepsi Fan Deck below to see an Instagram Reel we put together on our top picks SRO areas at AT&T Stadium, where there are couches and TVs to watch the game on. 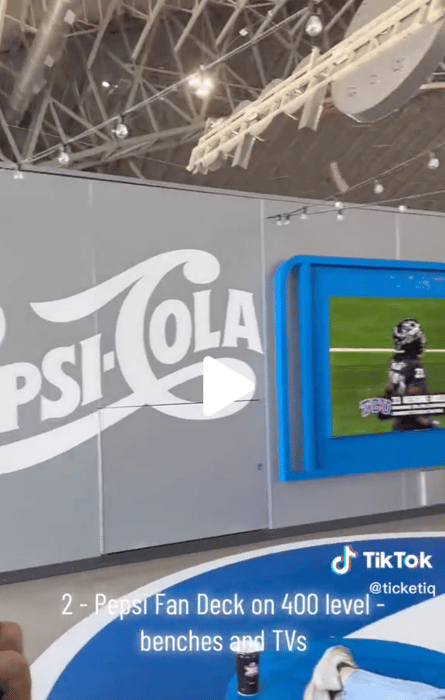 Where To Buy SRO Tickets at AT&T Stadium

How Much Are Standing Room Tickets at AT&T Stadium

Prices for SRO Cowboys tickets start as low as $20 depending on the opponent match-up. The most expensive SRO tickets are usually around $50.