Following last year's postponement due to the COVID-19 pandemic, Dave Matthews Band has announced rescheduled dates for the tour and tickets are now on sale. The tour will now begin on July 23  in Raleigh, NC at the Coastal Credit Union Music Park at Walnut Creek and run through November 13th where the tour will end with two shows at Madison Square Garden in New York City.

On the secondary market, TicketIQ offers Fee-Free Dave Matthews Band tickets with a Refund Guarantee. Our Refund Guarantee states that If an event is canceled or deem unfit for fans to attend, TicketIQ will refund ticket buyers in as soon as 15 days. That means that you can buy from TicketIQ worry-free.

How Much Are Tickets For Dave Matthews Band 2021 Tour

Primary market Dave Matthews Band tickets start between $40 and $50 for most shows. Dates with high demand can start at $80-$90.

Dave Matthews Band announced their North American 2020 Summer Tour dates which kicks off June 16th in Ucasville, CT and closes out September 23rd in Southaven, MS. Tickets go on sale to the general public on February 21st at 10am ET and are available to Dave Matthews fan club on January 23rd.

Dave Matthews Band will embark on a huge 40-date trek across the US. This includes a three-night run at the Gorge Amphitheater in George, WA with Mavis Staples, Béla Fleck, and Robert Randolph. As of 2018, the band had sold more than 100 million concert tickets and a combined total of 91 million CDs and DVDs. Their 2018 album, Come Tomorrow, debuted at #1 on the Billboard 200, making DMB the first band to have seven consecutive studio albums debut at the peak.

While a Dave Matthews concert is a right of summer passage for many, fans looking to get tickets to his 2019 tour can look at dates through the summer and the fall. For fans looking to plan ahead, for the 2019 tour, there are six shows in May, seven shows in June, 15 shows in July, four shows in August and Six Shows in September.

While there are some tickets available on the primary ticket market through Ticketmaster for all shows, most of the available seats are in the back of the amphitheaters, for Lawn seats, which start at $45, or for the most expensive ticket options which are typically above $200. 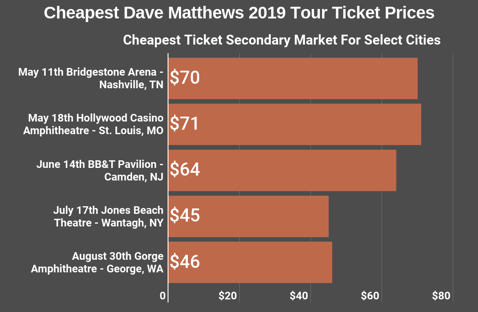 For fans looking to get up close and personal in the 100-section, the secondary ticket market is often the cheaper option, with tickets starting in the low $150-range at the back of the 100s section compared to face prices as high as $200 for primary-market tickets closer to the stage.

While the majority of shows take place at 7,500 to 10,000 seat  Amphitheaters and have scattered seats available via Ticketmaster, two of the upcoming arena shows with more tickets available are almost completely sold out, which means that the secondary market is the best option. For the Nashville show on May 11th at Bridgestone Arena, tickets start at $70 and  the May 14th show at Wells Fargo Arena in Des Moines, IA has tickets from $56.

For tickets to any of of the other Dave Matthews Band shows this summer and fall, visit TicktetIQ. TicketIQ is a ticket market place with access to Low Price Guarantees on all Concert tickets. If you find the same ticket for less, we'll give you 200% of the difference in ticket credit.

The Dave Matthews Band sure likes spending summers on the road. The band, which last toured in 2016, recently announced a huge tour that will wind its way around the U.S., through sites big and small, to coincide with the release of the band’s ninth album. 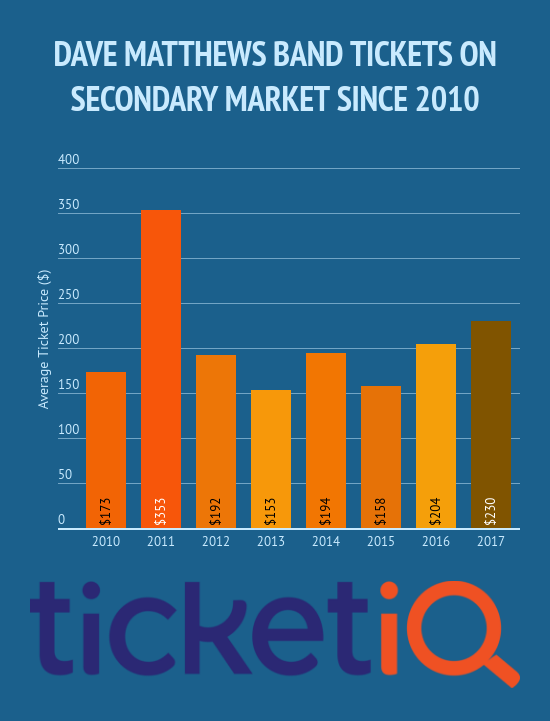 Tickets for the latest tour won’t go on sale until Feb. 2, but if history is any indicator, prices won’t be cheap. Since TicketIQ.com began tracking data, prices to see the Dave Matthews Band live have never been below $150 and peaked $353 for the 2011 20th Anniversary tour. The last time the band toured as a group, in 2016, tickets cost an average of $204 on the secondary market and last year, when Matthews toured with Tim Reynolds, but not the full band, it cost fans an average of $230 to see performances.

When the band last toured as a group in 2016, it was to celebrate the band’s 25th anniversary and the tour played 46 shows at 37 venues. The upcoming tour will be just as big of a monster, with 46 dates beginning in May 18 at Cynthia Woods Mitchell Pavilion in The Woodlands, Texas and ending at one of the most iconic venues in the U.S., L.A.’s Hollywood Bowl, on Sept. 10. In between, they’ll play everywhere from Atlanta to Alabama and New Hampshire to Washington State. The tour features two nights in Canada, July 10 at Budweiser Stage in Toronto and July 11 at Bluefest in Ottawa. The only three-night stint on the tour is at The Gorge Amphitheater in Quincy, Wash., Aug. 31-Sept. 2.

Though the tour will mostly swing through smaller cities and towns, there are two dates in Chicago (June 29-30). The tour skirts New York City, but the band won’t actually perform in the city.

Including the Matthews-Reynolds tour last summer, Dave Matthews has been on tour every year since 2011. The band released its last album, Away From the World, on Sept. 11, 2012, following the conclusion of its 43-date summer tour.

With last week's onsale of “The Night Before” featuring Dave Matthews Band, the countdown to the Super Bowl LII is on. Based on the results of the onsale, it appears football fans and Minnesotans are ready and excited.

Less than three day after tickets were made available to the public, all that is left on Ticketmaster.com are scattered single seats around $100. Overall, prices on the secondary market are now about 40% higher than primary ticket prices, which started at $57. Compared to the rest of the weekend, it's a very un-superbowl price, as noted in an article in the Minnesota Star Tribune earlier this week. The article also notes the on the same same night, there are tickets available for the Florida–Georgia Line who will play the first of three nights at the 9,000-person Club Nomadic. Tickets for that show start from $200, via Ticketmaster. The article goes on to speculate that the combination of shows will create what ‘could be the biggest Saturday night for concerts the Twin Cities has ever seen’.

Football fans and locals can thank On Location Experiences for what will be not only a packed night before, but also entire weekend.  In addition to the 30,000 tickets that they’ll sell between DMB and Florida-Georgia line, the company is putting on two more shows at Club Nomadic.  While acts have not yet been announced, if last year is any indication, it should be good.  Last year’s lineup included Taylor Swift, Bruno Mars, The Chainsmokers and Red Hot Chili Peppers.

With over 50,000 tickets available to events before the same even starts, On Location has turned the Super Bowl entertainment market upside down. In the Super Bowl club party model of old, parties like Maxim and Playboy were invite-only, and if you didn’t know someone, they’d cost anywhere from $1,000 to $5,000 on the secondary market. Outside of those marquee events, there’s a low rung of club options that require a lot of work to figure out.

Despite all the buzz that typically surrounds the Super Bowl parties, it was never something that  the majority of fans attending the event had access to. Depending on the price for the final two onsale at Club Nomadic, fans could attend three shows over the course of the weekend for around $500. Compared to the average price of Super Bowl Tickets on the secondary market over the last several years, that’s virtually a rounding error.

As for tickets to the game itself, NFL On Location also has those as well. Prices start at $13,499, and for that high-end option, you also get post-game on-field access to do confetti snow angels if you’re team wins.  For those on more of a budget, prices go all the way down to $6,299 for the basic ‘bronze’ package, which gets you a 300-level ticket and an all-inclusive pre-game party at the Armory. For music fans, though, the best option may be the $7,599, which not only get you a ticket, but also a hotel for three nights, and concert tickets for Friday or Saturday night. That’s in addition to tailgates galore and all of which is available for $7,500, which was the game-day get-in last year and makes this deal too good to pass up, especially if you’re a football fan.

Dead & Company have announced a new tour for 2021, which kicks off August 16th in Raleigh, NC and closes out on October 31st in Los Angeles, CA at the Hollywood Bowl.

Where to Get Cheapest Tickets for BottleRock Napa Valley + 2021 LineUp

Where To Find The Cheapest Summerfest Tickets + 2021 Lineup