Where to Find The Cheapest Phish Tickets + MSG NYE Run

Phish is notorious for their US summer tours, and after having to postpone their 2020 tour, they will head back on our the road in 2021. Phish recently announced rescheduled dates for their 2020 tour and tickets are available now.

Where To Buy Phish 2021 Tour Tickets

Primary market tickets are available via Ticketmaster. Tickets for their New Years run at MSG go on sale on Friday, October 8th at 12 p.m. ET.

On the secondary market, TicketIQ has Fee-Free Phish 2021 Tour tickets which also include a Refund Guarantee. Our Refund Guarantee states that if an event is canceled or deemed unfit for fans to attend, TicketIQ will refund ticket buyers in as soon as 15 days. That means that you can buy from TicketIQ worry-free. Customers on TicketIQ save between 15%-25% compared to other secondary market ticketing sites.

How Much Are Phish 2021 Tour Tickets

Primary market tickets are sold out for several dates. For shows with inventory still available primary market get-in prices range from $44 to $79. 2 and 3-day passes were also available for each stop on the tour, but most of those are sold out.

On the secondary market, get-in prices range from $70-$80 for lower demand shows, $110-$140 for middle demand shows, and nearly $200 for the highest demand shows, particularly the three September dates in Commerce City, Colorado, all three of which are sold out or nearly sold out on Ticketmaster.

How Much Are Phish MSG NYE Tickets

The 2019 summer tour starts June 11th for 25 shows across 12 cities. The 2019 tour kicks off with two shows at Chaifetz Arena in St. Louis and the majority of other stops also feature two or three nights stays. The only cities with a single stop on the tour are the Blossom Music Center, Cuyahoga Falls, Ohio on June 19th the PNC Arts Center in Charlotte on June 21st. With the exception of three shows in Colorado at their regular haunt Dicks Sporting Good Park in late August and Early September, all the shows are on the east coast or the Midwest.  Included in the summer tour are two shows at Merriweather Post Pavilion, site of many epic Phish shows, two shows at Fenway Park, two shows at Mohegan Sun Arena located at the Mohegan Sun Casino, three shows at BB&T Pavilion in New Jersey and two shows at Saratoga Performing Arts Center.  For fans looking to get the best deal on tickets, with the exception of $50 lawn seats, unsold primary-market tickets through Ticketmaster.com, Livenation.com and AXS.com is limited, with opening the only opening night 'unsold' tickets located behind the stage.

In addition to the slim picking on the primary market and secondary market options, there's also a brisk business of ticket trading and below face price sales for Phish shows, mostly enabled on CashorTrade.org, where all tickets for sale are listed at or below faceprice.

Mohegan Sun Arena: This is by far the most expensive stop on the tour and both shows are sold out, which means the secondary market is the best and only option to see Phish in Connecticut. Tickets for each of the nights start at over $100 on the secondary market and are completely sold out. 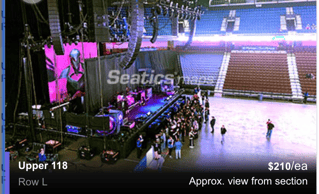 Fenway Park: These two shows, over the July 4th weekend, are the highest profile stops for the summer. While the Saturday night show is completely sold out, there are a handful of tickets still available on Tickets.com for the Friday night show. Below is the layout at Fenway park for the Phish shows as well as other shows this Summer like the Zac Brown Band.  While ZBB tickets are cheaper than Phish, they're more expensive than the Red Sox, who have tickets as low as $10 for some of their games this summer. 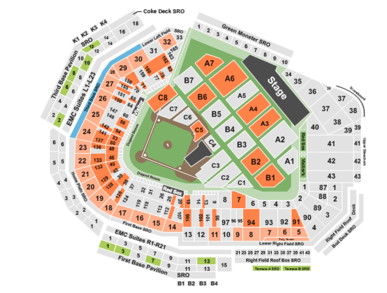 Where To Find The Cheapest Texas vs. Oklahoma Tickets for Red River Rivalry