With the arrival of Memorial Day, the 2019 season at Red Rocks amphitheater in Morrison Colorado is officially underway, and another opportunity soak in some natural beauty and along with the highest-level of musical talent anywhere on earth. Shows begin with this weekend with bluegrass band Devils Makes Three.  The season continues through November 2nd, when Deadmau5 closes the season. This summer, there's even some comedy talent, with Dave Chapelle and Jon Stewart on August 9th. For fans looking to get one of the 9,450 seats available, some shows are sold out while others still have tickets available directly from the venue, via AXS, their primary ticketing platform.

In addition to the typical slate of jam bands, which includes Phil Lesh of the Grateful Dead, Bela Fleck, Moe and the Disco Biscuits, as well as three nights of Widespread Panic, Umphrye's McGee, and the Avett Brothers, the highest demand night on the summer calendar comes as the result the newcomer pop sensation Billie Eilish, who has tickets starting at $214 on the secondary ticket market. Tickets for Eilish are completely sold out on Flash Seats, the official ticket provider of the venue. Red Rocks Amphitheatre is located in Red Rocks Park near Morrison, Colorado, which is 15 miles west of Denver.

TicketIQ has Low Price Guarantees for all Red Rocks shows this summer and into the fall.

Download the TicketIQ app for $20 off your first ticket purchase 📲 🎟️🎤 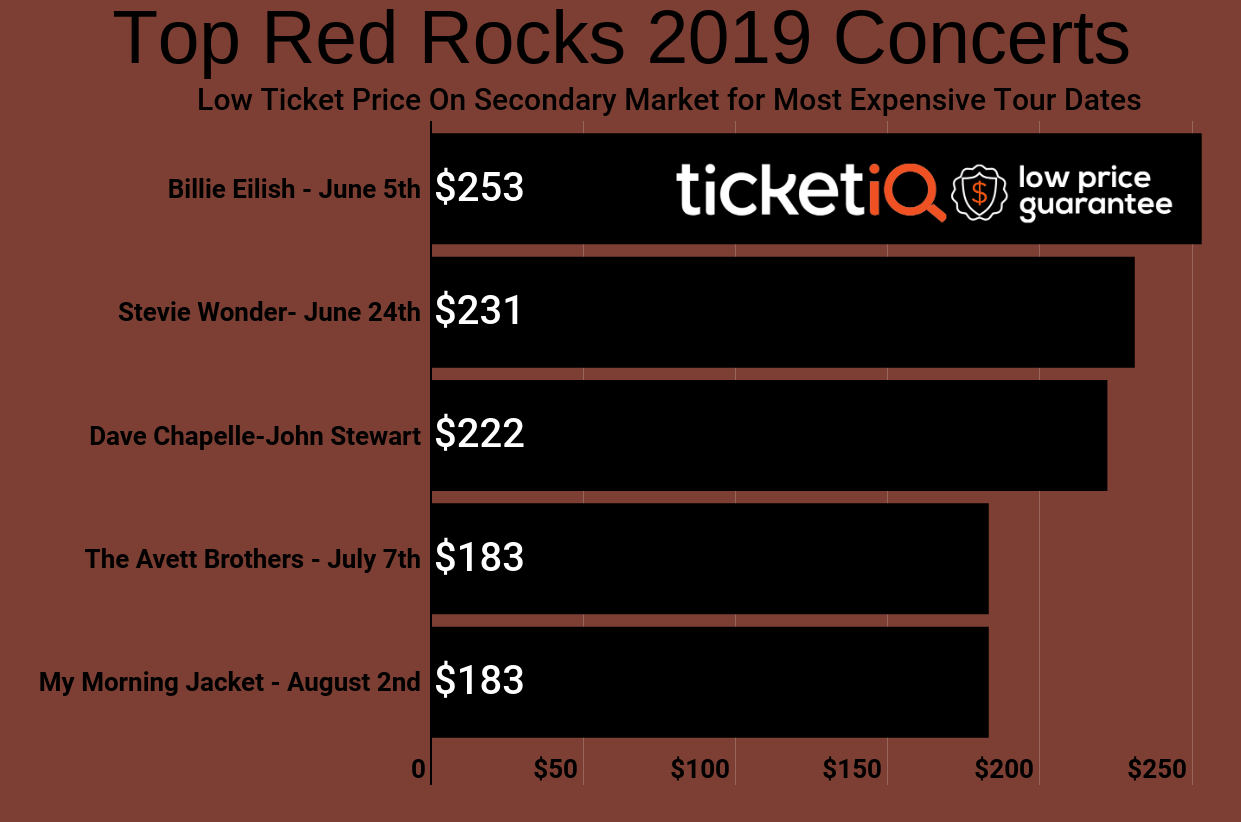 For sold out concert or seats, TicketIQ has Low Price Guarantees on all Summer concert tickets.  TicketIQ offers a Low Price Guarantee on music, sports and theater tickets, which means that if you find a secondary market ticket for less on a site like Stubhub or Seatgeek, we'll give you 200% of the difference in ticket credit. TicketIQ customers save an average of 5%-20% compared to other major secondary sites.

Below is the remaining shows taking place at the iconic Colorado venue, where concerts began between 1906 and 1910 on a temporary platform. The amphitheater's rocks are named "Creation Rock" on the north, "Ship Rock" on the south, and "Stage Rock" to the east. Red Rocks Amphitheatre was designed by Denver architect Burnham Hoyt. The walls of the amphitheatre contain records dating back to the Jurassic period of 160 million years ago as nearby dinosaur tracks have been discovered as well as fossil fragments.

May 25 — The Disco Biscuits

June 16 — Nahko And Medicine for the People + Trevor Hall

Sept. 10 — An Evening with Mark Knopfler and Band