Many Billie Eilish fans in Chicago are unhappy after two June shows at the Aragon Ballroom were moved to one show at the United Center. Many Eilish fans who originally bought general admission tickets for the Aragon Ballroom, have been given tickets in the 300 level at United Center.  While fans have taken to Twitter to express frustration, one piece of good news is that tickets for the rescheduled show is there are more tickets available to see the electronic-infused artist who had taken the music world by storm.  While tickets on Ticketmaster.com sold out immediately for the remaining tickets, tickets are available on the secondary market for $150 for a 300-level seat. Before the venue changes, that was the same price for tickets the two nights at 5,000-person Aragon Ballroom before those shows were cancelled. United Center's concert configuration seats as many as 23,000 fans, but it doesn't appear tickets have been sold behind the stage for the June show.

The cheapest ticket for Billie Eilish at the United Center on 6/9 is now $125 after fees, with floor seats going for around $250. TicketIQ has Low Price Guarantees on all Billie Eilish Tickets for her shows through the end of July.

Download the TicketIQ app for $20 off your first ticket purchase 📲 🎟️🎤

For sold out concert or seats, TicketIQ has Low Price Guarantees on all Summer concert tickets.  TicketIQ offers a Low Price Guarantee on music, sports and theater tickets, which means that if you find a secondary market ticket for less on a site like Stubhub or Seatgeek, we'll give you 200% of the difference in ticket credit. TicketIQ customers save an average of 5%-20% compared to other major secondary sites. 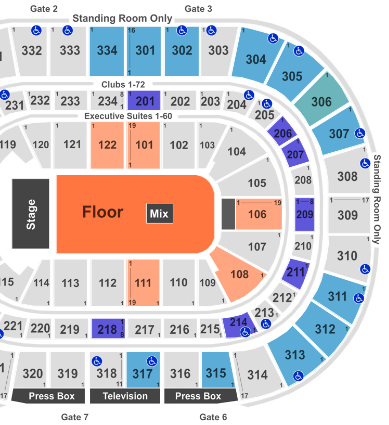 According to Billboard, "Bury a Friend" is one of three concurrently charting radio hits for Eilish. Along with its Alternative Songs ascent, "Bad Guy" climbs 25-22 on Pop Songs and debuts at No. 39 on Adult Pop Songs, while "When the Party's Over" bullets at its No. 19 high on Pop Songs.

Seven-time Grammy award-winner, Billie Eilish, has announced plans for the 'Happier Than Ever' World tour in 2022 supporting her upcoming album of the same name. The 32-date tour will launch on…

Cavaliers are Bulls' Most Expensive Home Opponent Through First Half