While Bonnaroo is know to attract big acts, it's taking thing to the next level by attracting a whole venue. For the second consecutive year, Grand Ole Opry members will perform, and the list is impressive, featuring Old Crow Medicine Show, Ricky Skaggs and Riders In The Sky as well as special guests Steve Earle and The Dukes, Morgan Evans, Ashley Monroe, Molly Tuttle and Wendy Moten. Bonnaroo is only the third palace the legendary show has traveled to in its 93-year history, following New York’s renowned Carnegie Hall and Washington D.C.’s Kennedy Center.

In addition to their Tennessee neighbors, there are some more traditional heavyweight performing over the four days, including Phish performing on June 14th and June 16th, including Childish Gambino, Kacey Musgraves, Solange, The Avett Brothers and Cardi B.  Below is a full list of acts scheduled for each of the four days.

TicketIQ has a Low Price Guarantee on Bonnaroo tickets, in addition to Low Price Guarantees on all music festival tickets, which means that if you find a secondary market ticket for less on a site like Stubhub or Seatgeek, we’ll give you 200% of the difference in ticket credit. TicketIQ customers save an average of 5%-20% compared to Stubhub and Seatgeek. Download the TicketIQ app for $20 off your first ticket purchase 📲 🎟️ 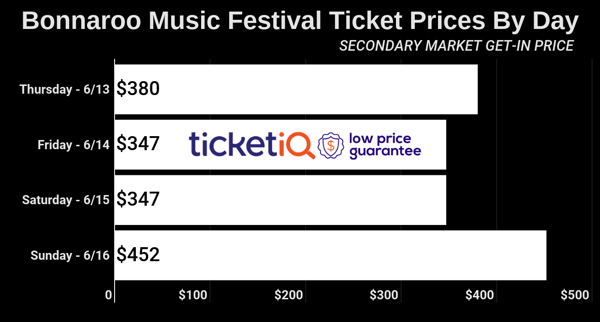 VIP options start at $880 after fees and come with the below and are also available via Frontgate.com. VIP tickets on the secondary market are much higher, so it's best to get directly from the festival site.

On Eve of First Fenway Park Gig, A Look at the Average Pearl Jam Setlist in 2016

Music Festival Season By The Numbers: An Early Guide to Festival Ticket Buying in 2016

One Day Out, 4-Day Bonnaroo Passes Averaging Over $400 on Secondary Market