London-born rapper 21 Savage is preparing for a month-long U.S. tour that starts July 10 in Oklahoma City and runs through August 16 in Atlanta. The tour will hit 18 cities from San Diego to New York, and doesn’t make multiple stops anywhere. Joining him for most tour dates with be North Carolina rapper DaBaby.

Tickets for seven of the shows will cost fans $70 or more on the secondary market, and the remaining 11 are available for less than $70, and in some cases, for less than $50.

All shows are general admission, and many primary market tickets are available through Ticketmaster. On the primary market, there are also VIP options available at many of the stops on the tour, including the  “Ultimate VIP Meet & Greet” which starts at $495. The package includes a general admission ticket, a chance to meet 21 Savage and take a photo, as well as early entry to the venue.

On the secondary market, TicketIQ also has a Low Price Guarantee on 21 Savage tickets for every stop on his "I Am > I Was" Tour, in addition to Low Price Guarantees on all concert tickets, which means that if you find a secondary market ticket for less on a site like Stubhub or Seatgeek, we’ll give you 200% of the difference in ticket credit. TicketIQ customers save an average of 5%-20% compared to Stubhub and Seatgeek. 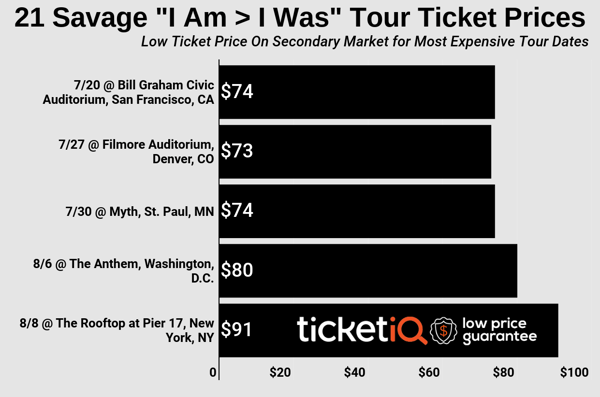 The show San Diego show on July 18 is the cheapest on the secondary market, with tickets starting at $28 in Garden Promenade A versus $18.75 on Ticketmaster.

Below is a look at some of the higher-interest shows, with secondary market tickets starting at $70 or more: