Where To Buy 2020 Arizona Diamondbacks Tickets?

Arizona Diamondbacks single-game tickets went on sale on the primary market on Wednesday, February 19. Information about season tickets and mini packs are currently available directly through the team.

How Much Are 2020 Arizona Diamondbacks Tickets?

On TicketIQ.com, the average asking price for an Arizona Diamondbacks ticket is $69, the third priciest since 2011, but down 17% against last season. In 2019, tickets peaked at $81, and the second priciest season was 2018, when tickets cost an average of $74. The cheapest season was $46 in 2014. Diamondbacks tickets are ranked No. 15 in terms of price across Major League Baseball. The priciest seat in the league is $167 for a Boston Red Sox home game.

On the secondary market, tickets to most home Diamondbacks games are available for $30 or less.

Among the cheapest games is the July Sunday, July 19 game against Miami, for which the cheapest seat is $19 in Outfield Reserve 302 and the priciest has an average asking price of $680 in Infield Box 126, Row 24 behind home plate on the third-base side. 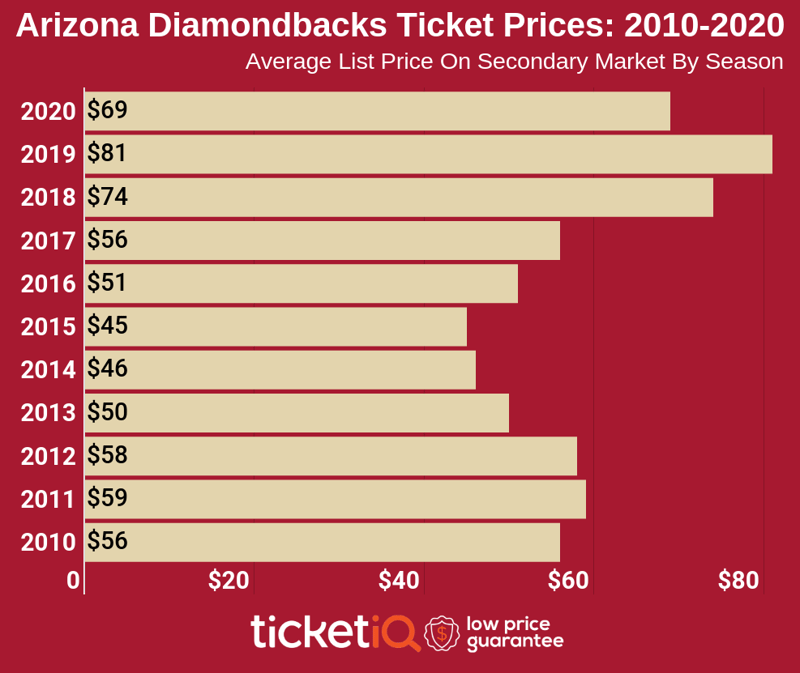 On the primary market, fans can request information about season tickets through the team. Season tickets are at a discounted rate as compared to single-game tickets. Season-ticket holders also get discounts on concessions and merchandise, access to pre-sales, early entry, and invitations to Diamondbacks Experiences.

Information about Mini Plans is also available via the Diamondbacks. According to the team, fans can build their own ticket pack, and prices vary depending on the number of games and location of seats.

For Sold Out Seats, TicketIQ has Low Price Guarantees on all events at Chase Field including all Arizona Diamondbacks games as well as concerts. That means that if you find a secondary market…