Diverse musician Beck, who plays everything from hip-hop to folk to country music, kicked off his latest tour on July 11 at Ridgefield, Washington, and will play stops through North America over the summer, wrapping up on August 30 at West Palm Beach, Florida. Cage the Elephant will open for the whole tour.

Demand for tickets is high and many of the higher-interest shows are 90% sold out or more, including the July 23 show at Englewood, Colorado, which is sold out on the primary market. Beck will play only one date in each city, including an August 11 stop in Toronto, Canada.

Where To Buy Beck Tickets

Primary market tickets are available through Ticketmaster, LiveNation and AXS, depending on the show. On the secondary market TicketIQ has a Low Price Guarantee on Beck and Cage The Elephant tickets for every stop on "The Night Running" tour, in addition to Low Price Guarantees on all concert tickets, which means that if you find a secondary market ticket for less on a site like Stubhub or Seatgeek, we’ll give you 200% of the difference in ticket credit. TicketIQ customers save an average of 5%-20% compared to Stubhub and Seatgeek.

How Much Are Beck Tickets

For that July 23 show at Fiddler’s Green Amphitheater in Colorado, TicketIQ has General Admission Lawn tickets starting at $78 or fans can treat themselves closer to the stage in Section Lower 102, Row NN for $301. 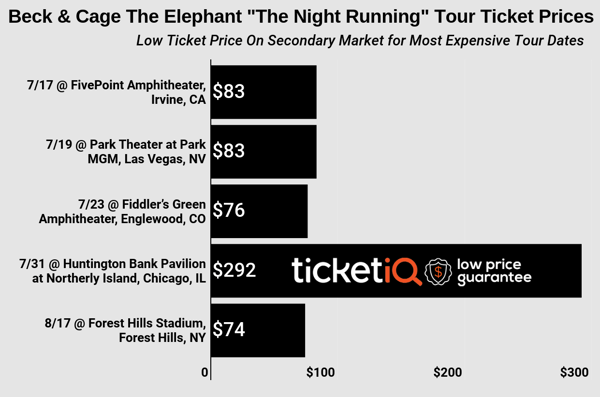 For the Las Vegas show on July 19, Ticketmaster has seats starting at $60.50, but the show is 80% sold out on the primary market. Dynamically priced tickets in Section 304, Row F close to the stage are currently priced at $270,  but similar seats in Row J of Upper 304 are available for $130 on TicketIQ.

The cheapest show of the summer on the secondary market is $22 at Mansfield, Massachusetts. The get-in price buys a ticket in the open-air seating area. On the primary market, lawn seats are no longer available, and the cheapest ticket on LiveNation is $40.50 for Section 11.

Beck announced his latest album, "Hyperspace" in April, but no release date has been set yet.

Below is a look at the higher-interest shows with secondary market get-in prices of $50 or more:

All Beck & Cage the Elephant Tour

How To Find The Cheapest Nas & Mary J. Blige Tickets For Their 2019 Tour + Face Price Options

Cage The Elephant Tickets Average $84 For Remainder Of 2015 Tour