Single-game primary market tickets to the Boston Red Sox go went sale Friday, January 24 at 10 a.m. EST. Select April, May and September games are already on sale via the MPV and the team website.

On the secondary market, TicketIQ will offer fans a Low Price Guarantee on all sold out Boston Red Sox tickets in addition to Low Price Guarantees on all Major League Baseball tickets. That means that if you find a secondary market ticket for less on a site like StubHub or Vivid, we’ll give you 200% of the difference in ticket credit. TicketIQ customers save up to 25%.

How Much Are 2020 Boston Red Sox Tickets?

On the secondary market, TicketIQ has seats available for all Boston Red Sox home games. The two priciest series are against the New York Yankees, for which the cheapest tickets are $111 for the June 12 game in the middle of a three-game set, and $106 for the second game of a four-game set July 30-August 2.

According to TicketIQ, the average asking price for a Boston Red Sox game at Fenway Park is $167, up 7% over last season. That average is the second highest of the decade, behind a $168 average in 2018, when Boston went on to beat the Los Angeles Dodgers to win the World Series. 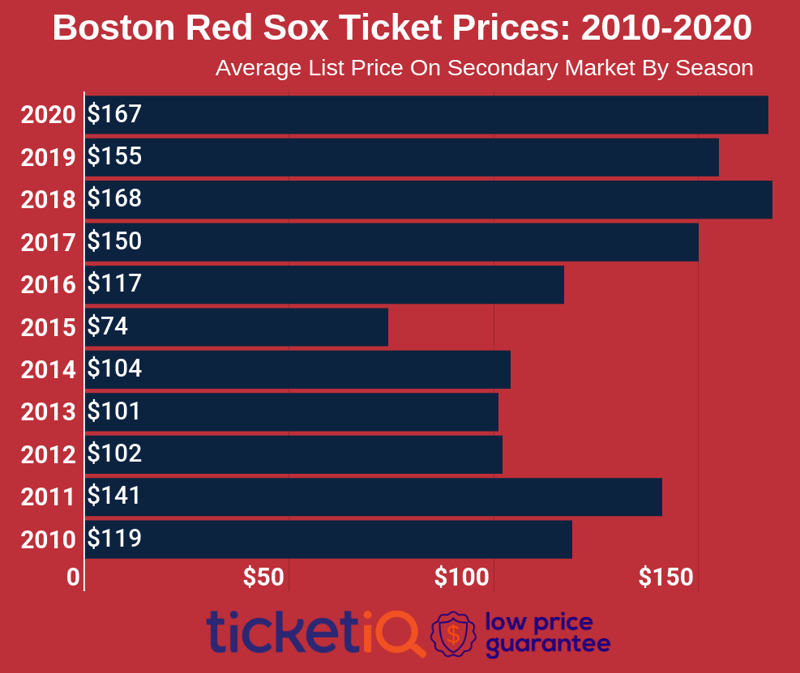 On the primary market, fans can also purchase a Triple Play Pax, which includes three games. The New York Yankees’ series can be included in this package, which starts as low as $30, depending on games selected. Season ticket plans are also available for 10, 20, 40 or all 81 home games. The 10-game plan starts at $357 for bleacher seats, while full-season plans range in price from $4,972 for seats in the Right Field Upper Box to $11,663 for field-box seats.

Fenway Park encourages mobile ticketing via the MLB Ballpark app, but does still accept print-at-home tickets. The team provides an extensive FAQ section on how to access and use digital tickets.

Where To Buy 2020 MLB Tickets On the primary market, tickets are available via Ticketmaster or the team's websites. Several teams single-game tickets have already gone on sale, while others will…