Where To Buy Buffalo Sabres Tickets

Single-game tickets on the primary market for the 2019-20 Buffalo Sabres are currently available. Since leaving the Memorial Auditorium in 1996, the Sabres have played in the KeyBank Center and single-game tickets are available through Tickets.com and the team’s official site. Below is an example of a Sabres seating chart and prices for a game with a good amount of unsold face value options.

On the secondary market, TicketIQ has Low Price Guarantees on sold out Buffalo Sabres tickets for all games on the 2019 schedule, and all sold out NHL games. That means that if you find a secondary market ticket for less on a site like StubHub or SeatGeek, we’ll give you 200% of the difference in ticket credit. TicketIQ customers save an average of 5% to 20%, compared to StubHub and SeatGeek. Below are the cheapest tickets on the secondary ticket market for the Sabres most expensive game of the season, November 29th vs the Maple Leafs. 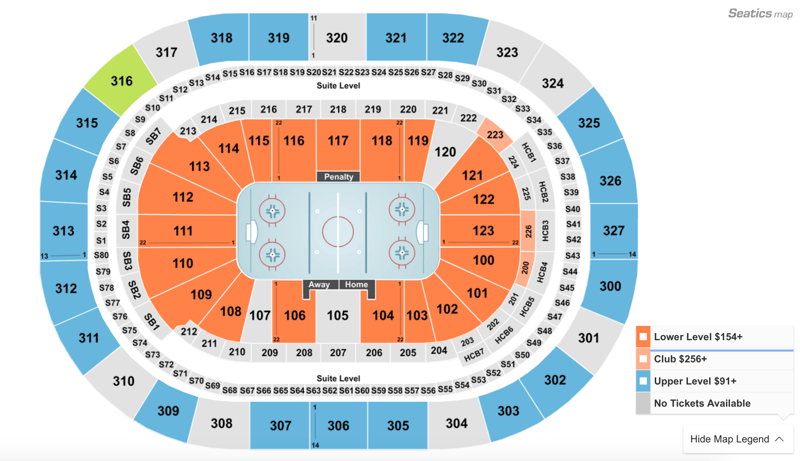 Like most teams in the NHL, the Sabres use dynamic pricing, charging variable amounts depending on the game. For marquee match-ups, such as divisional clashes against the Toronto Maple Leafs, primary market seats range from $85 to $250; games against lesser opponents start at $45. As of now, primary market tickets are available at each price point for virtually every game. That means you’ll have time to shop around and consider all of the possible seating locations to ensure you have the view you truly want.

On the secondary market, however, there’s more flexibility. The Sabres enter the 2019-20 season as the sixth cheapest team in terms of average resale ticket price. Seats in the KeyBank Center are currently averaging $92, a 9% decrease from last year.

That average price is cheapest Sabres tickets have since 2011-12. At this point, it’s safe to say that Buffalo fans have grown weary of the team’s consistent rebuild. Despite the team’s struggles on the ice, however, Jack Eichel is still a legitimately talented player and new head coach Ralph Krueger should bring some fresh perspectives to the club after his team as Southampton Football Club’s chairman. 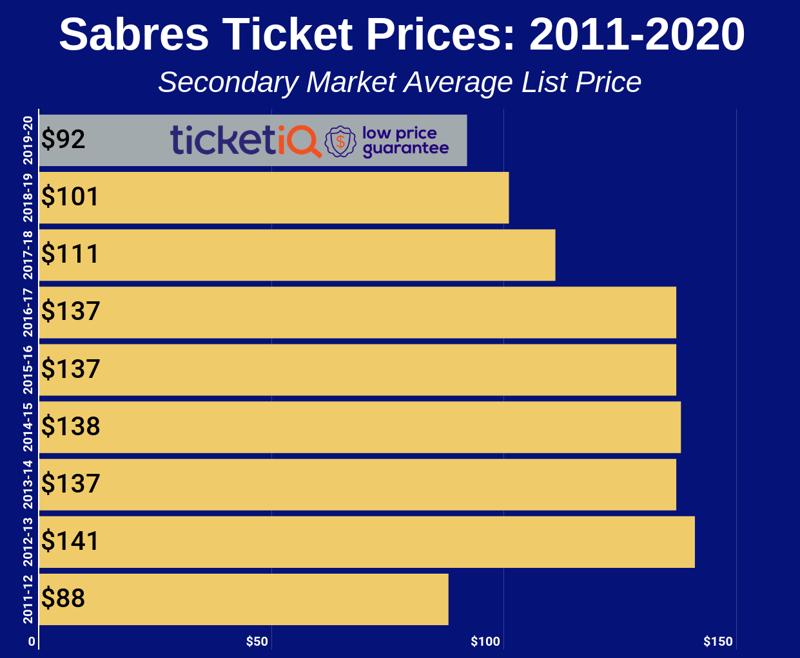 What are the Sabres Season Ticket and Mini Plan Options

If you’re going to be attending several Sabres games this season, the team offers several different ticket plans. Season ticket prices range from $1030 in the top of the 300 level to $5048 in the center of the 200s club. In addition to tickets to all 40 regular season games and two preseason games, season ticket holders also receive a number of perk, including priority access to playoff tickets, a special 50th season anniversary gift, and invitations to season ticket holder events.

Beyond that, the Sabres offer seven mini plans, each with its own theme. With options ranging from The Original Six pack, featuring games against the league’s oldest teams, to The Cats and Dogs Pack (games against teams with feline or canine mascots), there’s an option to suit any taste. Fans can also build their own package by selecting between six and 39 home games. Prices for all of these plans, whether they are premade or custom built, depend on the number and quality of games included in the package.

Where are Club Seats at the KeyBank Center

If you’re looking for a premium experience while watching the Sabres, the KeyBank Center offers three club seating options.

Executive Suites are probably what you imagine when you think of a suite at a sporting event. Each box can fit 18 fans and includes a TV to ensure that you don’t miss a moment of the action.

Club Level Boxes are located in the 200 Club Level at the end of the arena where the Sabres shoot twice, providing a premium experience closer to the ice. Each box can hold 16 guests and includes food and drinks served in the club lounge before the first faceoff.

The Mercedes-Benz Business Class Suite is the biggest premium option, accommodating 36 guests. You can select between all-inclusive or a la carte food and beverage options and even host a business meeting in the box earlier in the day.

Like many other teams, the Sabres use mobile ticketing at the arena. If you’re attending a game, you can get into the building using your One Buffalo app; some tickets are also available as a print-at-home PDF, so make sure you double check your entry method before leaving home.

The Top 10 Most Expensive Sabres Games on the Secondary Market

The 10 most expensive Sabres games cost an average of over $100 on the secondary market. If you look at Tickets, however, there are some bargains to be had, with tickets for several games dipping below $50.

Canadiens Host Sabres In This Week's Most Expensive NHL Game