Where to Buy 2019-20 Carolina Hurricanes Tickets

Single-game tickets on the primary market for the 2019-20 Carolina Hurricanes are currently available. Since 1999, the Hurricanes have played at PNC Area, and unsold face value tickets are available through Ticketmaster and at the PNC Arena box office. Below is an example of a Hurricanes seating chart with a good amount of unsold face value options. For the most part, tickets are cheaper directly from the team, with ample availability.  As an example, center ice tickets in section 119 cost $150 for many games, while tickets in the same section on the secondary market start closer to $200 (after fees). For many of the sections at PNC Arena, there are also about twice as many unsold face value tickets tickets as there are secondary market tickets, in some section, the primary market is the only option. 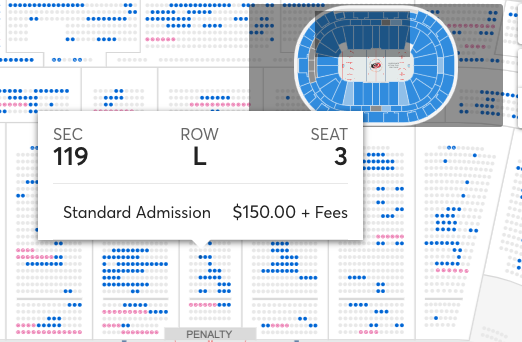 On the secondary market, TicketIQ has Low Price Guarantees on sold out Carolina Hurricanes tickets for all games on the 2019 schedule, and all NHL tickets. That means that if you find a secondary market ticket for less on a site like StubHub or SeatGeek, we’ll give you 200% of the difference in ticket credit. TicketIQ customers save an average of 5% to 20%, compared to StubHub and SeatGeek. Below are the cheapest tickets on the secondary ticket market for a higher demand Hurricanes game at PNC Arena: 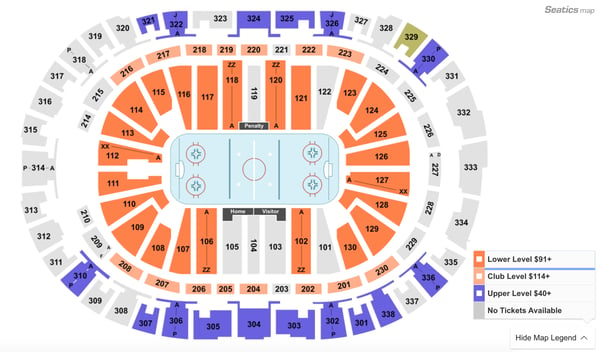 How Much Are 2019-20 Carolina Hurricanes Tickets

Carolina Hurricanes tickets are the fourth-least expensive on the secondary market, with a current average asking price of $73. 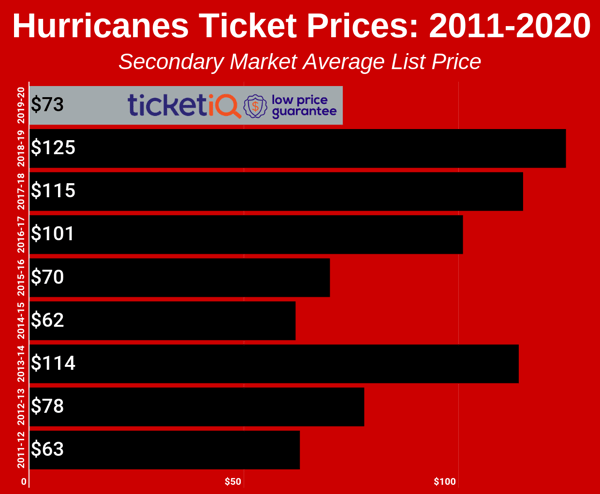 This season’s secondary market price is the lowest for the Hurricanes since 2015-16 and is the fourth lowest of the last decade. The 2019 Hurricanes made their first postseason since 2009 and reached the conference finals, which was their same finish in 2009. Carolina won the Stanley Cup in 2006, which was the only time in team history that it registered triple-digit points.

What are the Hurricanes Season Ticket and Mini Plan Options

Fans interested in season-ticket, 22-game, and 11-game memberships can browse the website to purchase them and to learn more about the amenities and pricing. There are many benefits with ticket packages, including food and beverage credit, which are available for a limited time, in addition to free ticket vouches, 15% concession discount, and pre-sale access to PNC Arena events.  The concession credit ranges from 5% for full-season ticket holders to 3% for 11-game package. Season ticket prices can be as much as 50% cheaper than buying games on a single game basis, as the team lays out on their site.

Where are Club Seats at PNC Arena

The suites include two televisions and a private restroom, and for fans who have a full-season suite, they have tickets to all PNC Arena events, including Hurricanes games, NC State men’s basketball games, concerts, and family shows.

The Champions Club, which is found in sections 210 to 214, includes televisions, an open grill with North Carolina BBQ among other options, and four alcoholic drink vouches per 21-and-over guest at the 45-foot bar.

The Club Ledge is the arena’s most affordable premium area and is found in sections 226 to 228. A carvery sandwich is included with the ticket and guests over 21 years of age will receive two drink vouchers.

PNC offers mobile ticketing via the Ticketmaster app, which is available at the App Store or Google Play, and allows fans to manage tickets. Printed tickets are not allowed at PNC Arena. The arena also provides Wi-Fi for fans and upgraded it during the 2018 offseason.

The Top 10 most expensive games on the secondary market

Three of the Top 10 priciest games at PNC Arena this season are trending at more than $100, including two against the Pittsburgh Penguins. However, the get-in price for those contests is less than $50.