Where To Buy 2020 Cincinnati Reds Tickets?

Cincinnati Reds single-game tickets are available via MPV. Season tickets and mini plans are also available through MPV. The Reds open their season on Thursday, March 26 at Great American Ballpark against the St. Louis Cardinals.

How Much Are 2020 Cincinnati Reds Tickets?

On the secondary market, TicketIQ has seats to all Cincinnati Reds games. Tickets to most Reds home games can be had for $25 or less, including a handful of games for which the cheapest seat is $11. Among those games is Sunday, August 30 against Milwaukee, for which fans can buy a bleacher seat for $11.

The overall average asking price on the secondary market for a Cincinnati Reds home ticket is $55, an increase of nearly 13% over last season. The average is the third highest of the decade, behind $70 in 2017 and $64 in 2018. 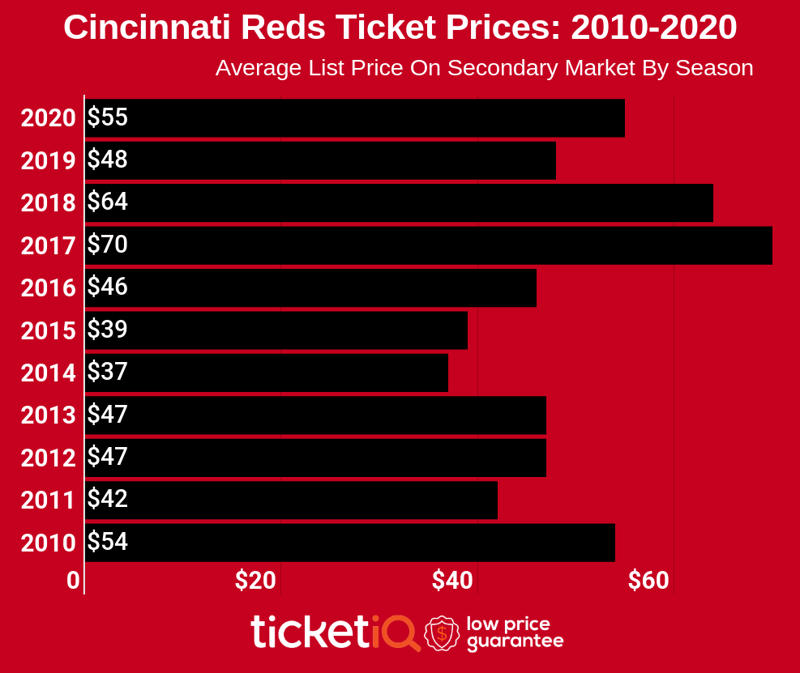 On the primary market, season tickets start at $800 for seats in the 400 sections in left field, and go up to $3,680 in infield Sections 114, 115 and 131. The Reds have eight partial packages available. The smallest is a 13-game pack that includes only Saturday games, including against the Cardinals during the opening series, as well as games against the Chicago Cubs and Milwaukee Brewers. Seats for the Saturday Package start at $260.

Great American Ballpark offers digital ticketing via the MLB Ballpark app and MyTickets, which must be linked to access tickets. Fans can buy, sell or transfer tickets using these accounts.

How To Find Cheap The Decemberists Tickets + Face Value Options

For sold out seats and events, TicketIQ has Low Price Guarantees on all events at Great American Ballpark for Cincinnati Reds games as well as concerts. That means that if you find a secondary…