How To Find The Cheapest Colts Vs. Jaguars Tickets + Face Value Options

How Much Are Colts vs. Jaguars Tickets at Lucas Oil Stadium on 11/17/19

When the Jacksonville Jaguars play at Indianapolis Colts in the AFC South matchup on Sunday at Lucas Oil Stadium, seats in the upper bowl and a handful of  field-level section remain on the primary market via Ticketmaster. Fans can buy tickets in the 500 sections high above the sidelines or the 600 sections in the end zones starting at $54. In the 400 sections in the end zone prices start at  $109 or $117 along the sidelines. Club Seats at Lucas Oil Stadium are on the 100, 200, 300 and 400 levels between the 25-yard lines. Club Seats remain on the 400 and 300 Levels starting at $313, and the best seats still left are in Section 112 behind the Jacksonville bench at the 40-yard line for $371. 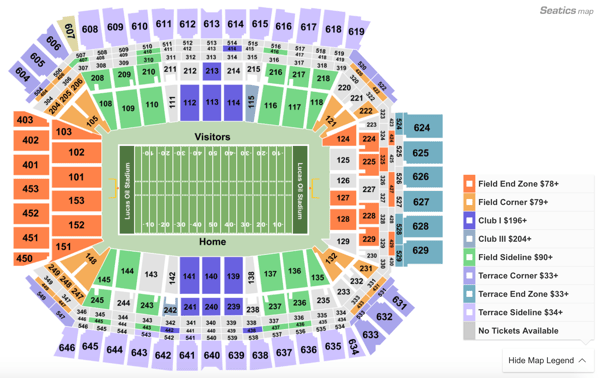