How To Find Cheap 2022 Denver Broncos Tickets + On Sale Info

Where To Buy 2022 Denver Broncos Tickets

The United Club has five-year membership options that include complimentary VIP parking, playoff ticket priority, and 20 percent off at the Broncos Team Store. There are just 5,000 limited $100-per-seat Broncos Huddle Memberships remaining for United Club seats.

The Single Game Suites, which can accommodate 17 to 56 players, include a food and beverage package, parking passes, complimentary gameday programs, personalized service, and four suite guest passes to invite additional guests who already have game tickets.

The 5280 Room (also known as the room that is one mile high) is another premium hospitality suite at Empower Field. There are nine LCD high-definition televisions as well as in-suite restrooms and cushioned extra-wide leather seats. In addition, there is indoor seating, VIP parking, and an exclusive VIP entrance via the media tunnel and elevator.

To manage your Broncos tickets, the team has a mobile app available on the App Store and Google Play. The app is also used for mobile entry into the venue. The Broncos require ticket holders to use mobile tickets to enter Empower Field at Mile High, and it is suggested to add the ticket to your phone’s mobile wallet to avoid slow WIFI or cellular signal while entering the stadium.

How Much Are 2021 Denver Broncos Tickets

At the week 12 point in the season, the Broncos have a 5-5 record and are tied for 3rd in the AFC West. The team's attendance mark so far is at 100.4%. The average price for Broncos tickets is $445, and is an increase of 25.7% from 2019. The cheapest remaining game at Empower Field At Mile High is the December 19th game against the Bengals, where the cheapest tickets start under $80. The most expensive remaining game of the season is the January 9th game against the Chiefs. For that game, the cheapest ticket starts at $124, with the cheapest lower level ticket going for $250 for a ticket in section 132.

The Broncos are prepare to host fans at full capacity for the 2021 season.

On the primary market, season tickets are no longer available, but fans can join the lengthy Reserved Season Ticket Waiting List.

Although nothing has officially been announced regarding the 2021 NFL season, here are the current health and safety protocols that were put in place at Empower Field at Mile High for the 2020 season.

You are required to follow all six-foot social distancing markers that will be displayed throughout common areas inside and outside Empower Field at Mile High. These markers will help you line up for security screening, restrooms, shops and concessions.

We are working to reduce congestion when entering and exiting Empower Field at Mile High. Assigned entry gates will be based on your seat location. With social distancing in effect, fans are asked to provide extra time to go through the security screening process.

Face coverings will be mandatory for anyone in-stadium (fans and staff) and must be worn at all times (other than while actively eating or drinking), including during security screening. Wearing a face covering not only helps to protect you but also other patrons.

If you're in the stadium and begin to feel ill, you should find help immediately. The stadium's on-site medical team will be fully prepared to treat you on-site and provide you with personal protective equipment (PPE), if necessary.

If you feel ill at any point before leaving or on your way to the stadium, showing any COVID-19 symptoms or have come in close contact with anyone confirmed to have tested positive for COVID-19, we ask that you please be a good teammate and stay home.

Game tickets will be distributed in "pods" and Season Ticket Members will have the ability to purchase as many as four seats in the same pod through the online process.

Sections will be separated into 30 groups to limit exposure between fans with each defined area assigned restrooms and concessions.

Signage will be clearly displayed, reinforcing social distancing guidelines and the prohibition of congregating in groups within the concourses or seating bowl. To maintain pod integrity, fans will be required to attend the game with known guests or transfer the allotment as a single unit or to a family member/friend attending the game within the pod.

Proximity to Players and Each Other

Empower Field at Mile High will be as touchless as possible from the entry process to restrooms to concessions.

The stadium is now a cashless venue. Payment options through mobile devices (ex: Apple Pay) and traditional scan/chip options for credit/debit cards at all points of sale will be implemented.

Mobile ordering will also be expanded this season.

Empower Field at Mile High is entirely mobile-friendly and transitioned to mobile ticketing fully ahead of the 2018 season. The stadium is one of the most WiFi connected in all of sports.

UPDATE: On August 21st it was announced that the Broncos will not be allowing fans at Empower Field at Mile High for the team's home opener against the Titans. The Broncos hope to be able to allow fans back as the season progresses. Here's more from the announcement:

"Our organization remains hopeful that we can host a limited number of fans on a gradually increasing basis beginning early this season. Taking a careful, measured approach with attendance will allow us to evaluate and adjust all COVID-19 safety enhancements before moving forward.

"We will continue to work closely and in collaboration with the state to determine the next steps, ensuring we are doing our part to protect the health of our fans and community."

They also acknowledged that games will be played before a reduced capacity.

Fans who do attend will be required to wear masks and practice social-distance. The team and stadium have implemented "cashless concession options, touchless bathroom fixtures, sanitation stations and air purification technology."

How Much Are 2020 Denver Broncos Tickets

On the primary market, the Broncos single-game ticket website page shows listings for games, but the tickets are not available yet for the public.

Despite limited inventory this season, TicketIQ has seats available for all Denver Broncos home games. The average ticket price on TicketIQ is $730, which is in the second-highest price in the league. The secondary market price for Broncos tickets has increased by 106 percent since last year, which is the eighth-highest increase in price in the NFL from 2019 to 2020.

How Much Are 2019 Denver Broncos Tickets

Tickets to see the Denver Broncos play at home have an average asking price of $354, which ranks No. 6 across the NFL. The price is an increase of 4% over last season, and is the fourth most expensive of the last decade. The priciest ticket was $434 in 2017, the year Vance Johnson was hired to replace Gary Kubiak.

On the primary market, the Chicago, Kansas City and Oakland Raiders games are 95% percent or more sold out. For the Bears game, the only primary market seats that remain are either handicap accessible or companion seats, which must be purchased with a wheelchair seat. Prices for games against the Jaguars, Titans, and Lions start at $64. While match-ups against the Chargers, Raiders and Browns start around $90.

For the Chiefs game, there are pockets of primary market tickets available through the stadium, including a group of tickets together in Section 122, Row 15 behind the Chiefs bench. These tickets are listed at $542 on Ticketmaster.

Fans should shop around, though, because TicketIQ has seats in the same section in Row 37 starting at $439. A cheaper option on the primary market are seats in North End Zone Section 232, which are listed at $230 on Ticketmaster. That section is sold out on TicketIQ, but seats in adjacent Section 233 start at $342.

Below is a look at secondary market prices for all eight of the Broncos home game:

The Denver Broncos open the season at home Sunday in a West Coast premiere matchup against the Seattle Seahawks. With a $367 average asking price on the secondary market. Below is how Broncos ticket prices stack up on the secondary market across the league. As you can see below, 2018 Denver Broncos tickets are down 12% compared to last season, and are third most expensive since 2011. They're also the second highest in the NFL this season behind only the New England Patriots. The most expensive ticket of the decade was last season, two years removed from the Broncos last Super Bowl win. Prices trended up from 2015 until 2017, when they reached a high of $434. 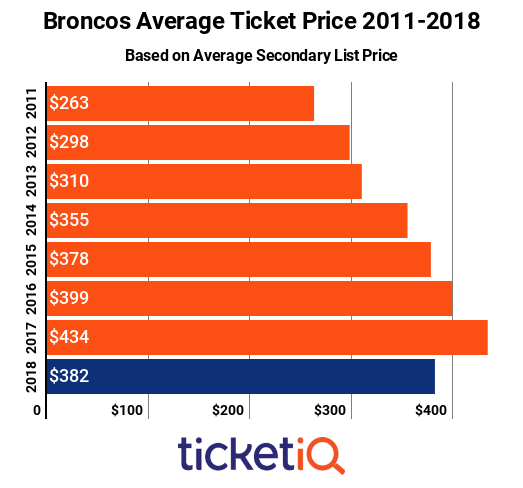 With a $382 average asking price, Broncos tickets are ranked No. 2 in terms of price across the NFL. Only the New England Patriots tickets, at a $501 average asking price, are higher. Season tickets are available through the team website, and fans can take advantage of variable pricing with a season ticket package. Single-game seats are available through the Broncos partner, Ticketmaster, for all games, though some are resale tickets and others are primary market tickets. For the Monday Night Game October 1 against the Kansas City Chiefs, primary market tickets are available for $105 vs. a $120 get-in price on the secondary market. In addition, tickets throughout the stadium are available for all games through secondary ticket marketplace TicketIQ.com, with the company’s Low Price Guarantee.

Prices For Each Game on 2018 Broncos Schedule:

The priciest game of the season at Mile High is the November 25 Pittsburgh Steelers game, which is trending at $477 on the secondary market. The next most expensive game is the Week 2 meeting with the Oakland Raiders, which has a current average asking price of $396.

The Broncos and the Steelers have a rich rivalry that dates back to the John Elway era and stretches into the current decade when the Broncos eliminated the Steelers from the post season twice, including in 2015 on their way to a Super Bowl victory. Surely, if both teams are playoff bound – or nearly so – prices will rise even more.

How To Find Cheap Cincinnati Bengals Tickets + 2022 On Sale Info

Where To Find The Cheapest Broncos Vs. Raiders Tickets In 2019

Seahawks vs. Dolphins Is Top-Priced Week 1 Game of 2016 NFL Season