Rock band Heart is touring this summer for the first time in three years, and the band will get guest appearances from Sheryl Crow, Joan Jett and the Blackhearts, Brandie Carlile, Elle King and Lucie Silvas for select dates. The tour started on July 9 in St. Louis and was set to wrap up September 9 at the Hollywood Bowl in Los Angeles, but 11 new dates have been added, beginning September 26 at Wantagh, New York and ending October 13 in St. Paul, Minnesota.

The “Love Alive" Tour is named for a song from Heart’s 1977 album Little Queen.

Where To Buy Heart Tickets

Primary market tickets are available via Ticketmaster. Most of the higher-interest shows are 80 sold out or more on the primary market. The August 16 show at West Palm Beach is a sellout, and the August 25 show at Albuquerque is 95 sold out.

On the secondary market TicketIQ offers fans tickets to all shows and a Low Price Guarantee for Heart tickets for all sold out tour dates and all concert tickets this year. That means that if you find a secondary market ticket for less on a site like Stubhub or Seatgeek, we’ll give you 200 of the difference in ticket credit. TicketIQ customers save an average of 5-20 over Stubhub or Seatgeek.

How Much Are Heart Tickets 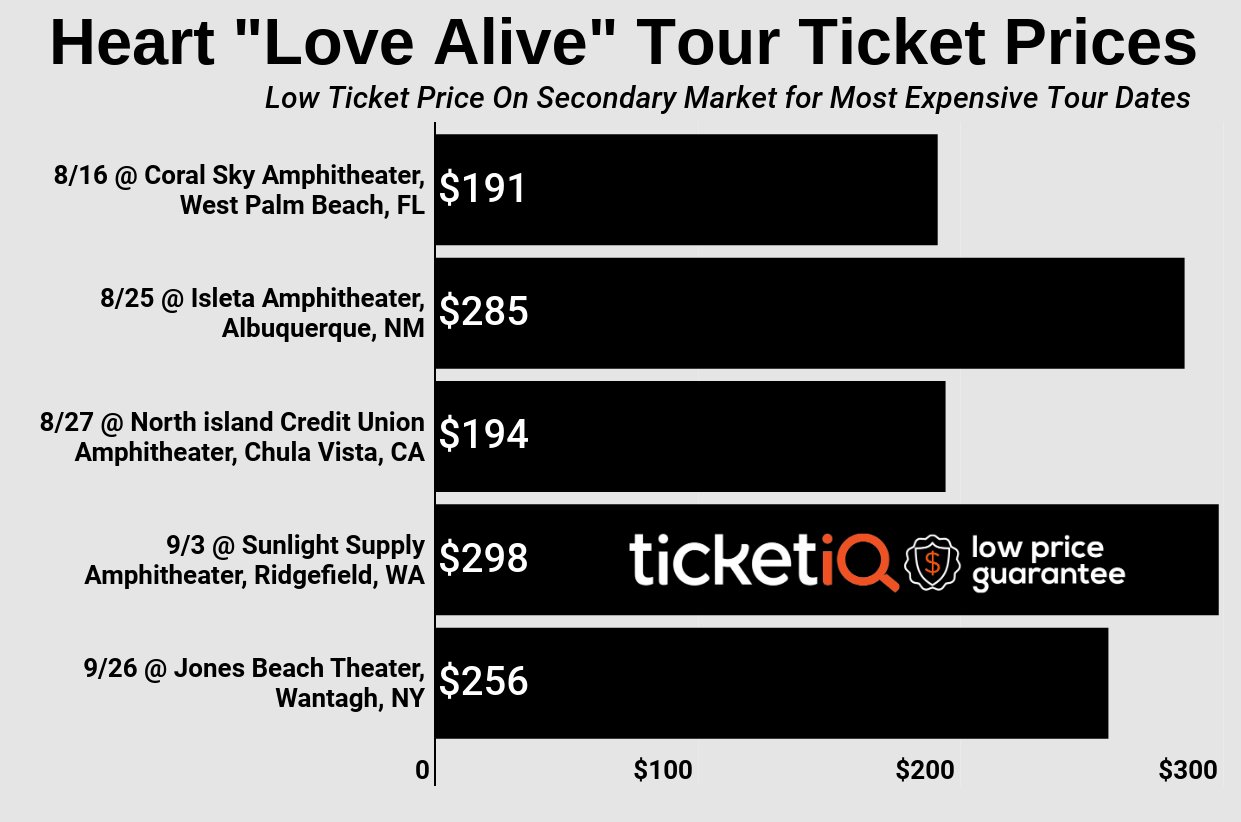 For the August 16 show, TicketIQ still has seats available, showing that fans should shop around. Fans can treat themselves to a spot in VIP Box 63 to the right of the stage for $195.

Among the cheaper remaining shows is the August 28 date in Phoenix. TicketIQ has seats all over Ak-Chin Pavilion, starting at $86 for seats in Middle 201 to the right of the stage to VIP seats in Section 102 for $339. Similar seats in the same section on LiveNation start at $139 without the VIP Package, which start at $209 (and include tickets) throughout the tour.

VIP Packages include seats, usually in the lower sections, and in some cases in the first row, as well as the chance to meet the artists. The Heart Front Row Meet & Greet and Heart Meet & Greet packages give fans a chance to meet Ann and Nancy Wilson, take a photograph, get VIP early entry to the venue and more. There are multiple VIP packages available.

TicketIQ is committed to the cheapest tickets possible, and we make much less on sold out tickets compared to other major marketplaces like StubHub and Vivid. That means ticket buyers save from up to 25 on TicketIQ on sports, music and theater. We're able to do this because we also work with teams, venues, and other ticket owners, to help them sell tickets at face price, directly to consumers like you, through Ticketmaster, Seatgeek and other primary ticketing platforms. You can read our new Summer Music Buying Guide that we think is the most objective advice on where to find the best deals on summer concert tickets, whether they're 'sold out' on TicketIQ or 'unsold' on the primary ticket market.

(UPDATE) Motley Crue, Def Leppard, Poison and Joan Jett have rescheduled 'The Stadium Tour' dates due to Coronavirus. The new dates will all take place in 2021. All new dates are listed at the…

John Lennon Tribute Concert to Be Held in NYC Next Month

Previewing the Average Sheryl Crow Setlist For Her 2015 Summer Tour