Single-game regular season tickets on the primary market for the 2019-20 New York Islanders for 28 games at Nassau Coliseum and Barclays Center. Tickets are available via Ticketmaster for all games in Brooklyn and Long Island.   Unsold face value tickets are most available in the back of the upper level, while ticket availability at Barclays is more dispersed as the two below screenshots show. 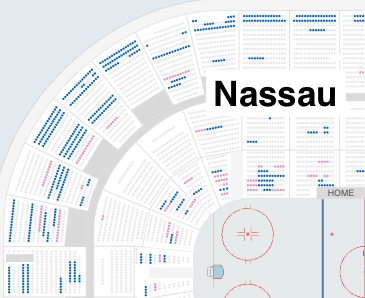 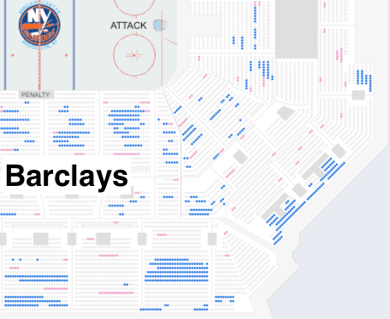 On the secondary market, TicketIQ has Low Price Guarantees on sold out New York Islanders tickets for all games on the 2019 schedule, and all sold out NHL games. That means that if you find a secondary market ticket for less on a site like StubHub or SeatGeek, we’ll give you 200% of the difference in ticket credit. TicketIQ customers save an average of 5% to 20%, compared to StubHub and Vividseats.

How Much Are 2019-20 New York Islanders Tickets

This season’s secondary market price for the Islanders is the second highest of the last decade, with the most expensive coming in 2014-15 at $156. The 2019 Islanders made their first postseason since 2016, but the team is in search of its first Stanley Cup Final appearance since 1984. 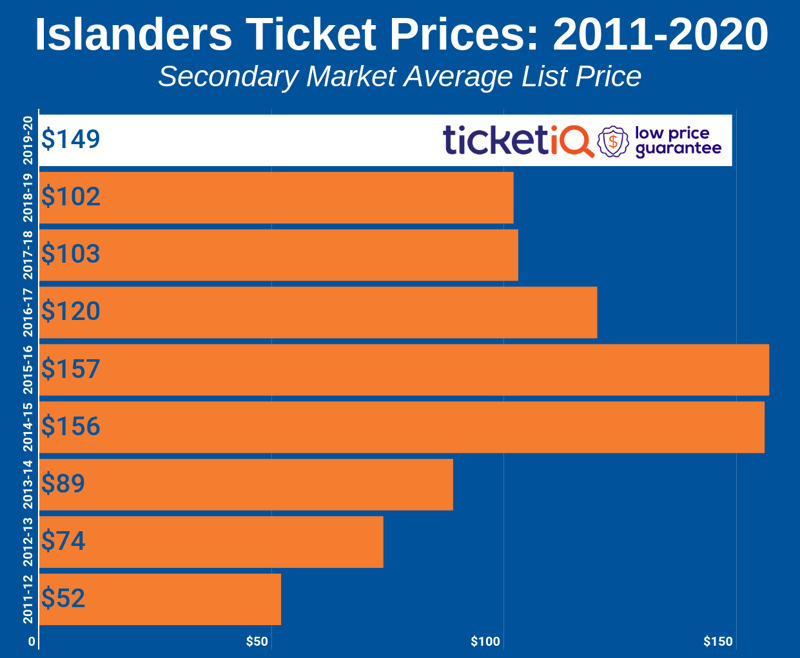 What are the Islanders Season Ticket and Mini Plan Options

Full season ticket plans start at $249 per month with a $100 deposit. There are also half season, partial plans, rinkside seating, and premium seat memberships available. Fans can book an appointment via the website or call 516-548-1533.

Where are Club Seats at Nassau Coliseum and Barclays Center

Luxury Suites are available at both Nassau Coliseum and Barclays Center and they range from 10 to 70 guests.

The Grant Thornton Loge Box at Barclays Center offers seats 15 rows from the ice, with all-inclusive food and drinks, including beer, wine, and liquor. There is also entrance through the Calvin Klein VIP entrance and access to the Parm Italian Restaurant inside the 40/40 Club.

The Islanders offer mobile ticketing for home games via the Islanders tickets website and Ticketmaster app, which is available at the App Store or Google Play, and allows fans to manage tickets.

The Top 10 priciest Islanders home games this season are between $100 and $300, with the most expensive contest being the season opener against the Capitals at Nassau Coliseum.

How Much Are Carolina Hurricanes vs. New York Islanders tickets on 3/7/20 A limited amount of primary market tickets remain available via Ticketmaster. Face value prices for the game start at $65…