The Chiefs advanced to the AFC championship game with an offensive explosion against the Texans.

The Kansas City Chiefs will play the Tennessee Titans in the AFC Championship game at Arrowhead Stadium on January 19th.

With a spot in the playoffs secured, Kansas City Chiefs post-season tickets went on sale to the general public Thursday, December 5 via primary market partner Ticketmaster. There was another on sale on January 6th.

On the secondary market TicketIQ will offer fans a Low Price Guarantee on all Kansas City Chiefs playoff tickets in addition to Low Price Guarantees on all NFL playoff and Super Bowl tickets. That means that if you find a secondary market ticket for less on a site like StubHub or Vivid, we’ll give you 200% of the difference in ticket credit. TicketIQ customers save up to 25%.

How Much Are Kansas City Chiefs AFC Championship Game Tickets

On the secondary market, fans can purchase tickets starting at $261 on the 300 Level in the end zone, and go up to $5,494 in  Sideline section 104, Row 1. There are myriad Club Sections still available, starting at $756. Club ticket holders get access to the 200 Club Level, which includes lounge access, early entry to the game, and premium food-and-beverage options. 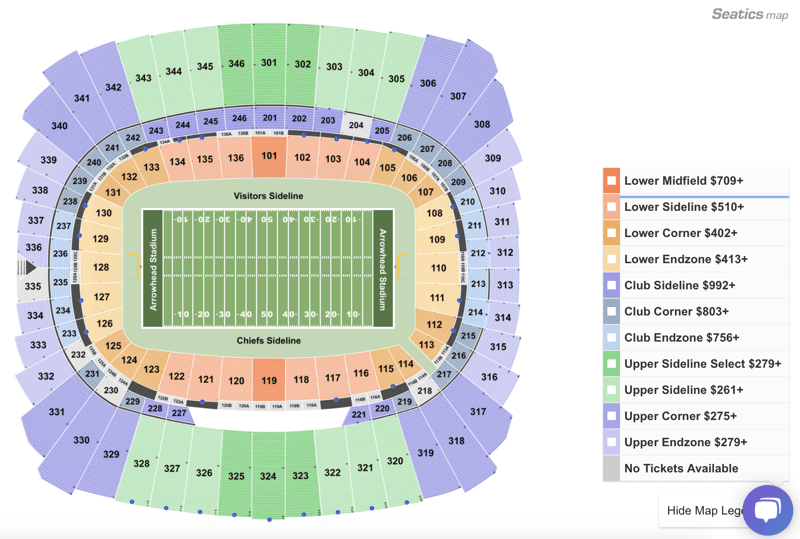 Below is a list of prices for all their playoff games this decade.

Super Bowl LV Attendance Policy News broke recently that capacity at the game might be limited to 20% due to COVID-19. If that turns out to be the case only 13,000-15,000 people would be able to…

How To Find The Cheapest Tennessee Titans Playoff Tickets

How To Find Cheapest Broncos Vs. Chiefs Tickets in 2020

How To Find Cheapest Chiefs Vs. Raiders Tickets in 2020