› Maluma  › How To Find The Cheapest Maluma 11:11 World Tour Tickets

Columbian singer Maluma continues his “11:11 World Tour,” with a North American leg that includes one stop in Canada, beginning September 6 in San Diego and wrapping October 20 in Denver. The tour started in May in Peru.
Several of the higher-interest shows are already 100% sold out on the primary market, while many other shows are 50% or more sold out.
TicketIQ has Low Price Guarantees on Maluma tickets for every stop on the 11:11 World Tour, in addition to Low Price Guarantees on all concert tickets, which means that if you find a secondary market ticket for less on a site like Stubhub or Seatgeek, we'll give you 200% of the difference in ticket credit. TicketIQ customers save an average of 5%-20% compared to Stubhub and Seatgeek.  You can also download the TicketIQ app for $20 off your first ticket purchase 📲 🎟️ 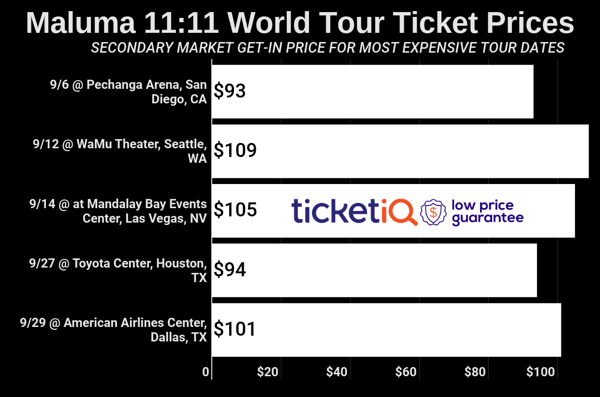 For the September 12 show in Seattle, the primary market is nearly 95% sold out, though fans can still get Orchestra seats in Section A for $502 via Ticketmaster. But showing that consumers should shop around, tickets in the same section on the secondary market start at $219.

Among the cheapest shows on the tour is the October 18 show in Rosemont, Illinois. Tickets start at $59 on the primary market in the Section 216 on the corner. For just a little more on the secondary market, fans can get a bigger selection and a similar seat starting at $75.
Below is a look at the higher-interest shows with secondary market get-in prices of $90 or more: