Mexican pop band Mana has been touring since 1993, but demand is still high for its 2019 North American “Rayando el Sol Tour,” which kicks off September 4 in Corpus Christi, Texas and wraps up November 30 in Oakland, California.

Mana will play a total of nine shows in Texas, and 11 in California. The tour makes one stop in Canada, on October 17 in Toronto.

Where To Buy Mana Tickets

TicketIQ has a Low Price Guarantee on Mana tickets for every stop on the “Rayando el Sol Tour,” in addition to Low Price Guarantees on all concert tickets, which means that if you find a secondary market ticket for less on a site like Stubhub or Seatgeek, we’ll give you 200% of the difference in ticket credit. TicketIQ customers save an average of 5%-20% compared to Stubhub and Seatgeek. Download the TicketIQ app for $20 off your first ticket purchase 📲 🎟️

Tickets for most shows can be had for less than $100 on the secondary market, but the higher-interest shows will run fans $125 or more to get in. Tickets are on sale on both the primary and secondary markets for the tour, but for the August 31 performance at the Sames Auto Arena in Laredo, Texas, tickets go on sale on via Ticketmaster on Friday, June 14 at 10 a.m. CDT.

How Much Are Mana Tickets 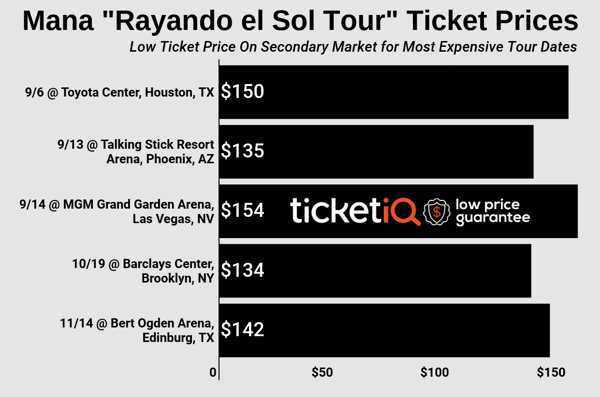 Among the more popular shows, the first show at Talking Stick in Phoenix is 95% sold out via Ticketmaster, with mostly single seats and a just handful of seats for groups still available, but TicketIQ has big selection of seats throughout the venue, showing that fans should shop around. Seats together via Ticketmaster are in the lower level near the stage, and can be had in Section C starting at $334.50. That same section costs $454 on TicketIQ, but fans can get into the show and sit with friends for as little as $139 in other sections.

Another reason to comparison shop is that Ticketmaster shows several of the higher-interest shows sold out, but tickets are available on the primary market via AXS for these shows, including September 14 at the MGM Grand in Las Vegas, and November 14 at Edinburg, Texas.

The cheapest show on the secondary market is October 27 at Duluth, Georgia, where fans can get into Infinite Energy Arena for as little as $46 in Concourse 101. Seats in the same section on AXS start at $39.50.

Below is a look at the higher-interest shows, with secondary market ticket get-in prices of $125 or more:

Top Concert Tickets Of The Week (6/8)