How To Find The Cheapest Nas & Mary J. Blige Tickets For Their 2019 Tour + Face Price Options

Rapper Nas and singer/songwriter Mary J. Bilge will co-headline a tour that started July 11 at West Palm Beach, Florida, and will play at venues across the United States and Canada before wrapping at the Hollywood Bowl on September 14. The pair will co-headline many of the dates, but Nas will play solo for some. The solo shows will be at more intimate venues, many with capacity of 7,000 or less and at least one that seats only 1,500.

The tour will make two stops in Atlanta, on  July 16 at the Chasten Park Amphitheater, and on August 26 at the Cellairis Amphitheater. The July show will be Nas only and the second will feature both artists. Most shows are 50% or more sold out on the primary market, and eight shows have get-in prices of $75 or more on the secondary market.

According to Ticketmaster, primary market tickets are not available for several Nas-only shows.

On the secondary market TicketIQ has a Low Price Guarantee on Mary J Blige and Nas tickets for every stop on their 2019 tour, in addition to Low Price Guarantees on all concert tickets, which means that if you find a secondary market ticket for less on a site like Stubhub or Seatgeek, we’ll give you 200% of the difference in ticket credit. TicketIQ customers save an average of 5%-20% compared to Stubhub and Seatgeek.

How Much Are Nas & Mary J. Blige Tickets 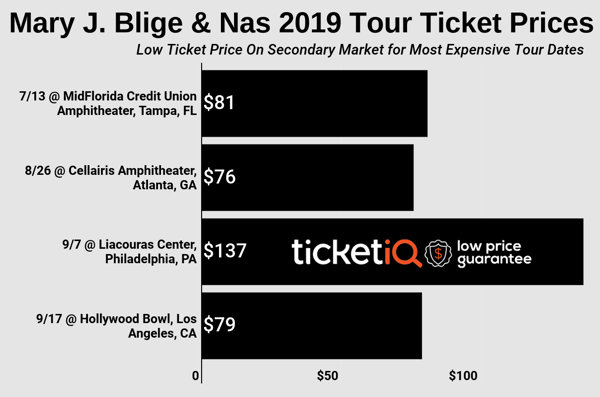 For the July 13 show with both Nas and Mary J. Bilge at Tampa, Florida, primary market tickets are about 60% sold out on LiveNation, and the cheapest available seat is $25 for Standard Admission, including most upper-level sections.  On the secondary market, there are fewer seats available, and tickets start at $84 in the upper levels.

But showing that fans should shop around, primary market tickets are about 90% sold out for Nas and Mary J. Bilge in the lower boxes at the Hollywood Bowl on September 14. There is a limited selection of seats in the Garden Boxes starting $375 and $550 in the Pool Circle, but the seats are dynamically priced and could change. On TicketIQ, similar seats start at $383 in the Garden Boxes and $546 in the Pool Circle.

The cheapest concert of the tour on the secondary market starts at $18 for a General Admission Lawn seat at Mansfield, Massachusetts on September 1. The same ticket starts at $30.99 on LiveNation.

Below is a look at the higher-interest shows, with secondary market get-in prices starting at $75:

Nas To Promote New Documentary With Time Is Illmatic Tour