Country singer Miranda Lambert will embark on her latest tour next month, when she opens a five-month tour on July 17 at Paso Robles, California. The tour is set to end in Greensboro, North Carolina on November 23. The U.S. tour will cross the country with single stops in most cities, but two at the Mohegan Sun in Connecticut September 13-14.

Where To Buy Miranda Lambert Tickets

TicketIQ has a Low Price Guarantee on Miranda Lambert tickets for every stop on the Roadside Bars and Pink Guitars tour, in addition to Low Price Guarantees on all concert tickets, which means that if you find a secondary market ticket for less on a site like Stubhub or Seatgeek, we’ll give you 200% of the difference in ticket credit. TicketIQ customers save an average of 5%-20% compared to Stubhub and Seatgeek. Download the TicketIQ app for $20 off your first ticket purchase 📲 🎟️

How Much Are Miranda Lambert Tickets 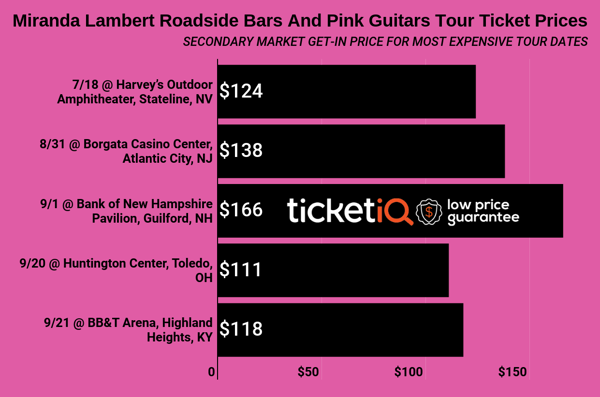 For the July 18 show at Harvey's Outdoor Amphitheater, TicketIQ show seats available directly in front of the stage in Section 5, starting at $247, as compared to no available seats in that section via Ticketmaster, meaning fans should shop around.

For the September 1 show in Guilford, New Hampshire, primary and secondary availability and price are nearly the same -- on LiveNation, fans can buy tickets in Section 1B right in front of the stage starting at $231. Similar seats on the secondary market start at $251.

Below is a look at some of the higher-interest shows, with secondary market get-in prices of $100 or more:

How to Find Cheapest Tickets for Country Thunder Wisconsin + 2020 LineUp

Country Thunder is back in Twin Lakes, Wisconsin for another super-hit music extravaganza on Jul 16 - 19, 2020.

Miranda Lambert Announces Cities on 'Keeper of the Flame' Tour