Where to Find Moulin Rouge Tickets

The cheapest face value tickets through Ticketmaster start at $125 (before fees) for Mezzanine seats from rows G to T.  Face Value for Mezzanine seats in rows A to D cost $299.  Face Value for Orchestra Seats range from $169 for partial view seats to $399 for the most expensive Orchestra seats, which are labeled as Premium. Wheelchair accessible seats are available in the rear of Orchestra and have a face value of $99 and $159.  In a Broadway rarity, the show also has pit seats, surrounded by stage. Called Can Can Table Seating, the tickets cost $359, and provide tableside seats surrounded on all sides by the action taking place on stage thanks to a passerelle runway that allows actors to 'can-can' around audience members

TicketIQ has Low Price Guarantees on Moulin Rouge tickets for all sold out tickets and shows.  For weekend shows, the secondary market may be a better value. According to TicketIQ, there are secondary market seats for all sections of the Mezzanine starting at $173. Those same seats are $189 on the primary market, showing that it pays to shop around.

TicketIQ also has Low Price Guarantees on all theater tickets, which means that if you find a secondary market ticket for less on a site like StubHub or Vivid Seats we’ll give you 200% of the difference in ticket credit. TicketIQ customers save an average of 5%-20% compared to StubHub and Vivid Seats.

Moulin Rouge! The Musical began previews on June 28 and is slated to open on July 26th at the Al Hirschfeld Theatre.

The stage version of Moulin Rouge premiered July 10, 2018 at the Emerson Colonial Theater in Boston, and on November 19, 2018 it was announced the show would move to Broadway.

The Al Hirschfeld Theatre is a Broadway theatre located at 302 West 45th Street in midtown Manhattan. The theatre has a seating capacity of 1,424. Since 2013, the venue opened in 1924 and was the home for Kinky Boots for 6 years. The Mezzanine has rows A through T while the Orchestra has rows A through W. There are also boxes on the left and right side of the theater. 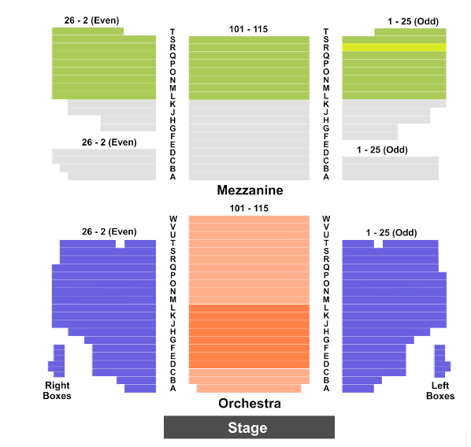 The show runs approximately 2 hours and 40 minutes with one 15 minute intermission, and will begin promptly at curtain time.  Doors open 45 minutes before show time. We recommend arriving at least 30 minutes before curtain.

Moulin Rouge! The Musical is recommended for ages 12 and up. Children under 4 will not be admitted. Everyone requires a ticket for entry.

If you have a bag or large coat or bag you'd like to check, the coat check is one flight down from the Orchestra level. The charge is $3 per item.

The Al Hirschfeld Theatre offers audio induction neck loops for those who have a "T" switch on their hearing aid or cochlear implant, and infrared headsets to enhance sound and dialogue. To get an assistive device, visit the headset booth on the Orchestra level. There is no charge, but a valid photo ID is required as a deposit.

General Rush is first come first serve. Depending upon the popularity of the show, you may need to arrive hours before rush tickets become available. To save time, it's worth dropping by or calling the box a day or two before and asking what time they would recommend you arrive. Your best chance to tickets are on lower-demand days that includes midweek days, summer months when lots of locals are out of manhattan, and for on bad weather.

Moulin Rouge has announced a $29 digital lottery available via Lucky Seat. Entries must be submitted no later than 11am the day before the show and tickets must be purchased by 4pm the day before the show. Wins cannot be transferred to other performances or other people, so choose only the performances you can attend.  Lotteries are different from rush tickets, which may be available at the box office on the day of the show, sometimes only for students. In addition to in-person lotteries, there are also digitial options available directly through each show. Playbill has a list of all lottery links for other shows, many of which require entrants to register using a social media account.