› Washington Redskins  › How To Find The Cheapest Giants Vs. Redskins Tickets In 2019

One of the more heated regional rivalries in the NFL, there NFC East foes always draw a crowd, and while tickets are still available on the primary market, there are limited quantities. The Giants and Redskins have played 174 times, and the Giants have won 101 of those games.

Primary market tickets for this game still remain, though they are mostly clustered on the Giants side of FedEx Field, in the 200 and 300 Sections. According to the latest Ticketmaster seating map, the game is about 95% sold out. Fans can still snag a pair of seats at the 50-yard line behind the Giants bench in Section 122 for $131 or on the Club Level in Section 321 above the 40-yard line for $649. For fans wanting a bigger selection, the secondary market is an alternative. TicketIQ shows seats available in most locations around FedEx Field. The cheapest seat currently available is $34 for a spot in Upper 410 on the corner. Those wanting a little luxury and a better view could consider the Joe Gibbs' Club Level, which has four clubs and seats in sections 308-316 and 330-334. A seat in Section 330 in the end zone starts at $114. In other parts of the stadium, 50-yard line seats on the Giants side in Section 221 cost $107, and seats in Section 1 behind the Redskins bench start at $440. 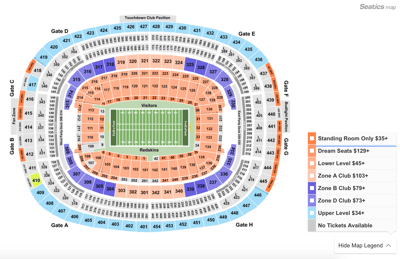 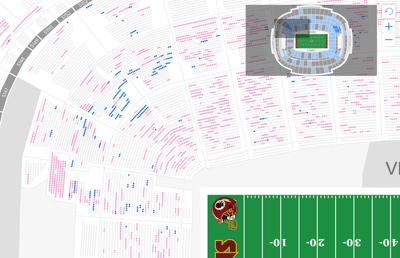 On the secondary market TicketIQ will offer fans a Low Price Guarantee on sold out Redskins tickets in addition to Low Price Guarantees on all sold out NFL games. That means that if you find a secondary market ticket for less on a site like StubHub or Vivid, we’ll give you 200% of the difference in ticket credit. TicketIQ customers save up to 25%.

Primary market tickets for Sunday's Washington Redskins at New York Giants NFC East matchup are still available, though in limited quantities and locations. On Ticketmaster, tickets are mostly in pairs, with a few available for larger groups. In the end zone in the 200 Sections, tickets start at $187 while Reserved Sideline Seating the 200 Sections, some with Club access start at $295. For a wider selection of seats and the opportunity to keep a bigger group together, fans should consider the secondary market. TicketIQ has seats throughout MetLife Stadium, including those on the Club Level. Seats on the Giants side of the field in Section 209 on the sideline at the end zone start at $326 and include access to the Chase Club. There are also Club Level seats on the Giants side still available in Sections 210 and 215, and on the Redskins side in Sections 234 and 239-242, starting at $293 with access to the Toyota Club. Among the other seats still available are spots in the 300 Sections on the corner starting at $88, and in the 300 Sections in the end zone starting at $83. For fans wanting to treat themselves, there are sideline seats still available, including two seats in Section 113, Row 6 behind the Giants bench for $804. 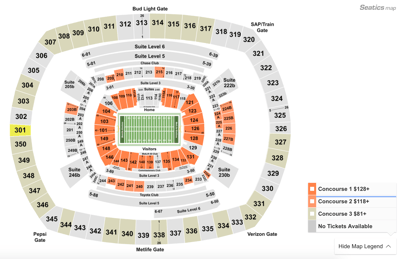 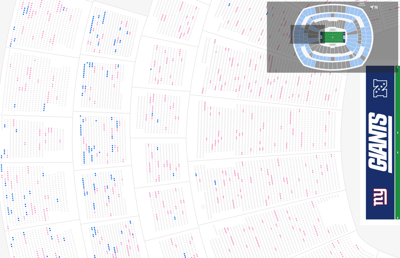 The 2021 NFL regular season has come to an end and the playoffs are here. Below, we will breakdown attendance policies,  and primary and secondary market ticket pricing for each team. Also, be…

How To Find Cheapest Eagles Vs. Giants Tickets In 2020

How To Find Cheapest Giants Vs. Redskins Tickets In 2020

How To Find Cheapest Cowboys Vs. Redskins Tickets In 2020

How To Find Cheapest Cowboys Vs. Giants Tickets in 2020

How To Find Cheapest Cowboys Vs. Redskins Tickets in 2020

How To Find The Cheapest Redskins Vs. Jets Tickets + Face Value Options