Where To Buy 2021 Orlando Magic Tickets

Primary market single-game tickets are available via Ticketmaster. Tickets for the Magic second half schedule went on sale on Saturday, March 6th at 8 a.m. EST.

On the secondary market, TicketIQ will have Fee-Free tickets for all Orlando Magic games which also include a Refund Guarantee. Our Refund Guarantee states that if an event is canceled or deem unfit for fans to attend, TicketIQ will refund ticket buyers in as soon as 15 days. That means that you can buy from TicketIQ worry-free. Customers on TicketIQ save between 15%-25% compared to other secondary market ticketing sites.

The Orlando Magic are allowing up to 4,000 fans to attend 2021 home games at Amway Center. Season ticket holders will be given first priority, followed by fans who have made a 2020-21 season ticket deposit.

Safety protocols put in place by the team include:

For a more detailed look at this season's safety protocols and polices, visit the team website.

With low inventory available on the secondary market, primary market single-game tickets can also provide Magic fans with some great deals for the 2019-20 season. The primary market get-in price for most games is under $20, though higher demand games, like match-ups against the Lakers, Warriors and Rockets, start between $60-$100. 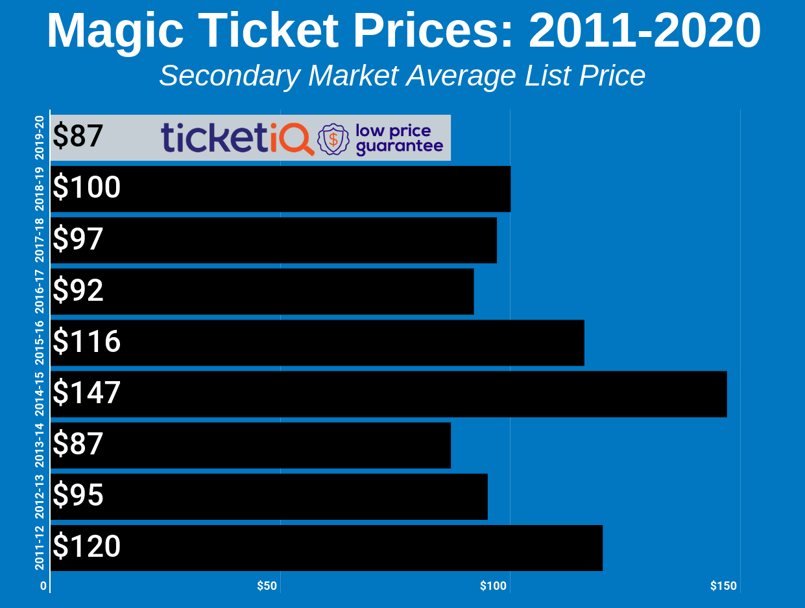 Fans can get into Amway Center for less than $75 on the secondary market for half of the Magic's home games, but the priciest games of the season will cost fans an average of $250 or more, including two games -- December 11 against the Los Angeles Lakers and April 15 against Toronto -- will cost fans more than $400 on the secondary market. Among the 10 priciest games of the season, two are against regional rival Miami.

Below is a look at the 10 games with the highest average asking price this season.