Primary single-game market tickets for the 2021-22 regular season are available via Ticketmaster.

On the secondary market, TicketIQ has Fee-Free Philadelphia 76ers tickets tickets which also include a Refund Guarantee. Our Refund Guarantee states that if an event is canceled or deemed unfit for fans to attend, TicketIQ will refund ticket buyers in as soon as 15 days. That means that you can buy from TicketIQ worry-free. Customers on TicketIQ save between 15%-25% compared to other secondary market ticketing sites.

The average price for 76ers tickets on the secondary market is $204 and is an increase of 36% from the 2019-2020 season. For the home opener against the Nets, the cheapest tickets available are $72, with the cheapest lower-level tickets starting at around $116. The most expensive home game of the season was the Jan. 27th matchup at the Wells Fargo Center against the Lakers, which had a get-in price of $136. However, following the Sixers trade for James Harden on February 11th, that changed.

The 76ers offer the 76ers Official Mobile App for free in the App Store or Google Play store. The app allows fans to stay current with box scores, stats and player bios. The team also offers the MySixersTickets website, on which fans can purchase, transfer, and sell tickets, as well as print out tickets.

They are also accepting deposits on partial plans, and deposits range from $50 to $250 deepening on where you want to sit.

Where Are Club Seats at Wells Fargo Center

The Wells Fargo Center will unveil major renovations this season, including the City Center Club, which has two 50-foot bars and high-end dining selections. The club is accessible by courtside ticket holders, and some in nearby Club sections. The club is located on the Event Level and offers direct sightlines to the court.

The 76ers and Wells Fargo Center also offer Club Boxes and Luxury Suites, which are available for single games or the season. Club Boxes are available for full or half seasons, and include guaranteed access to playoff tickets, VIP parking and other benefits. The Boxes are located above the action, but with clear sightlines. There is traditional event seating just outside of the Club area. Luxury Suites are available for single-game rentals, and include plush seating in the arena just outside the suite. Suites accommodate between 12-25 guests, and come with upscale catering packages, a bar area and a concierge.

Tickets for the game 7 of the Sixers-Hawks series at Wells Fargo Center are available on the secondary market starting at $199, immediately following Game 6. Standing room only tickets are available from $231. The cheapest lower level tickets is $336. The winner will advance to the Eastern Conference Finals.  Prices are almost guaranteed to go up until gametime, so the best bet if you're planning to go is to buy ASAP.

On the secondary market, TicketIQ has Philadelphia 76ers Playoff Tickets that are Fee-Free and come with a Refund Guarantee. Our Refund Guarantee states that if an event is canceled or deem unfit for fans to attend, TicketIQ will refund ticket buyers within 15 days. That means that you can buy from TicketIQ worry-free.

How Much Are Philadelphia 76ers Playoff Tickets

Below are screenshots of three tickets for Game 7 immediately after game 6.  Prices are almost guaranteed to go up until gametime, so the best bet if you're planning to go is to buy asap. Tickets in section 222 are the cheapest option other than SRO, while the tickets in section 123 are going for just under $500. The most expensive ticket is in the 1st row of section 113, which go for $1,692. 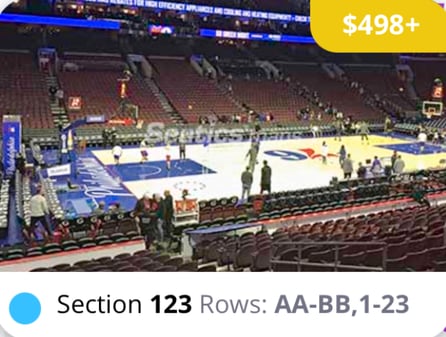 Below is a look at the average and get-in prices for each game of the 76ers Eastern Conference Semifinal round match-up against the Atlanta Hawks as well as the over series average, and home average prices for each team:

Below is a look at the average and get-in prices for each game of the 76ers first round match-up against the Washington Wizards as well as the over series average, and home average prices for each team:

Eastern Conference Semifinals: (No. 1) Philadelphia 76ers vs. (No. 5) Atlanta Hawks

Where To Buy 2021 Philadelphia 76ers Tickets

Primary single-game market tickets are available via the team website.

On the secondary market, TicketIQ has Philadelphia 76ers tickets that are Fee-Free and come with a Refund Guarantee. Our Refund Guarantee states that if an event is canceled or deem unfit for fans to attend, TicketIQ will refund ticket buyers within 15 days. That means that you can buy from TicketIQ worry-free.

It was recently announced that the 76ers can welcome fans back to Wells Fargo Center start on March 7th. Attendance will be limited to around 3,100 (15% of total capacity).

For more information visit the Back To Broad website.

The 76ers offer the 76ers Official Mobile App in partnership with DraftKings. The app allows fans to stay current with box scores, stats and player bios. The team also offers the MySixersTickets website, on which fans can purchase, transfer, and sell tickets, as well as print out tickets. 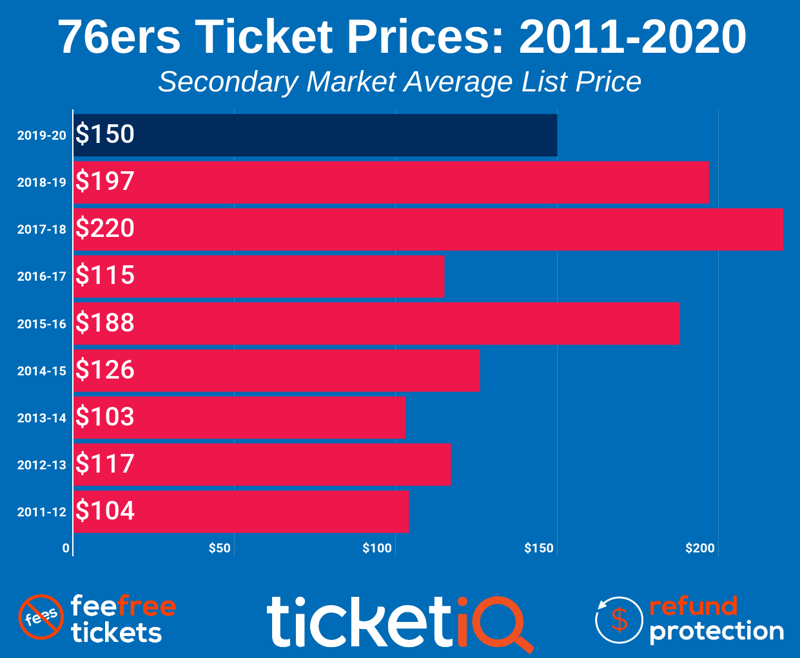 Where Are Season Tickets and Partial Plans at Wells Fargo Center

When season tickets become available, fans will be offered whatever seats are open, and they could be anywhere in the arena.

Top 10 Most Expensive 76ers Games On The Secondary Market

As is the case across the league, three California teams – the Lakers, Golden State and the Los Angeles Clippers – are among the Top 10 priciest. But the rival Boston Celtics and Milwaukee Bucks account for four of the Top 10 priciest games.

Last season, the Philadelphia 76ers got to the playoffs for the first time since 2011-12, but a second-round loss and the team’s youth are keeping fans from pushing up demand for tickets. The average asking price on the secondary market for a 2018-19 Philadelphia 76ers ticket is down 10% compared to last season. Below is how 76ers ticket prices stack up on the secondary market. But even with the decrease in average asking price, tickets are the second highest since TicketIQ.com began tracking data in 2011. The most expensive ticket of the decade was $220 last season.

With a $197 average asking price, 76ers tickets are ranked No. 10 in terms of price across the NBA. The Golden State Warriors are ranked No. 1, with a $463 average asking price. Last season, Philadelphia tickets were ranked No. 5. Season tickets are sold out, but fans can join one of two waiting lists  – Club 76 Elite for a $176 fee or Club 76 Free for no deposit. Elite customers are placed higher on the waiting list. Single-game tickets are available through ticket partner StubHub, as well as through TicketIQ.com. Both have seats available for all games, though selection is limited for some of the biggest games, including the February 10 Los Angeles Lakers game, for which tickets start at $138 on  StubHub. On TicketIQ.com, prices start at $133 for Mezzanine-level seats that come with the company’s Low Price Guarantee.

As is the case with many other teams, the game with the highest average asking price at the Wells Fargo Center is LeBron James’ first appearance as a Laker. The average asking price for the Lakers February 10 visit is $517, with a get-in price of $135. The next most expensive game is the March 2 game featuring the defending NBA champion Golden State Warriors, which checks in at $472. The only other game to crack $400 is the October 18 Chicago Bulls game.

Tickets to see the 76ers play their biggest rivals, the Boston Celtics, round out the top five with average asking prices of $322 on February 12 and $282 on March 20. The 76ers-Celtics rivalry is the most prolific in the NBA with 522 meetings dating back to 1949. The Celtics hold a 312-232 edge. TicketIQ.com has seats for both Celtics games available, starting at $50 in Mezzanine 221 for the first game, and at $49 in Mezzanine 205A for the second game. For either game, if the Celts or 76ers are in the mix for a playoff spot, prices are likely to rise. 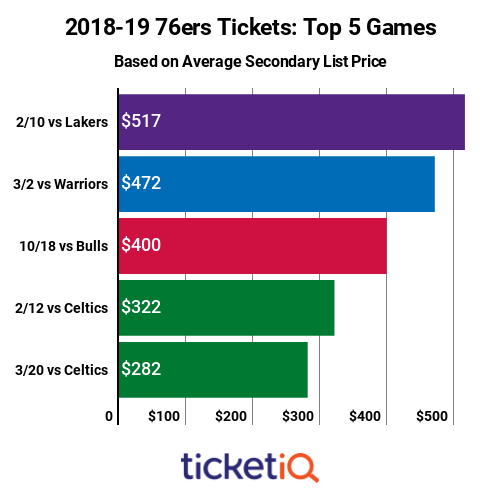 Where to Find The Cheapest Knicks vs. 76ers Tickets for 2019-20 Season