Where To Buy 2020 Portland Timbers Tickets:

Single-game tickets on the primary market for Portland Timbers are available via SeatGeek, and fans can join the annual membership season ticket wait list directly from the team. Portland Timbers plays at Providence Park in Portland, Oregon, and the stadium seats 25,218.

On the secondary market, TicketIQ offers fans a Low Price Guarantee on all sold out Portland Timbers tickets, in addition to Low Price Guarantees on all Major League Soccer tickets. That means that if you find a secondary market ticket for less on a site like StubHub or Vivid Seats, we’ll give you 200% of the difference in ticket credit.  In our efforts to continue to provide our customers with the best deals, we’ve removed all fees. TicketIQ now shows you the full ticket price from the start of your search. TicketIQ customers save an average of 5%-20% compared to StubHub and Vivid Seats.

How Much Are 2020 Portland Timbers Tickets:

On the primary market, seats for the March 8 contest against Nashville SC start at $38 for general admission in the supporters section. At $43, there are several 200-level seats available as well. The priciest seats for the game are $225 in Tanner Ridge Sections 2 and 6. For games on the primary market, get-in prices range from $25-$30 for most games. However the May 2nd game against the LA Galaxy has a get-in price of $42 and the May 17th game against Seattle has a get-in price of $65.

On the secondary market, the overall average asking price for a ticket to see the Portland Timbers is $110, making them the 2nd-highest MLS ticket. The average secondary market ticket increased by $27 for the Timbers, who exited the MLS Cup Playoffs in the first round in 2019. However, it was Portland’s third consecutive postseason appearance. 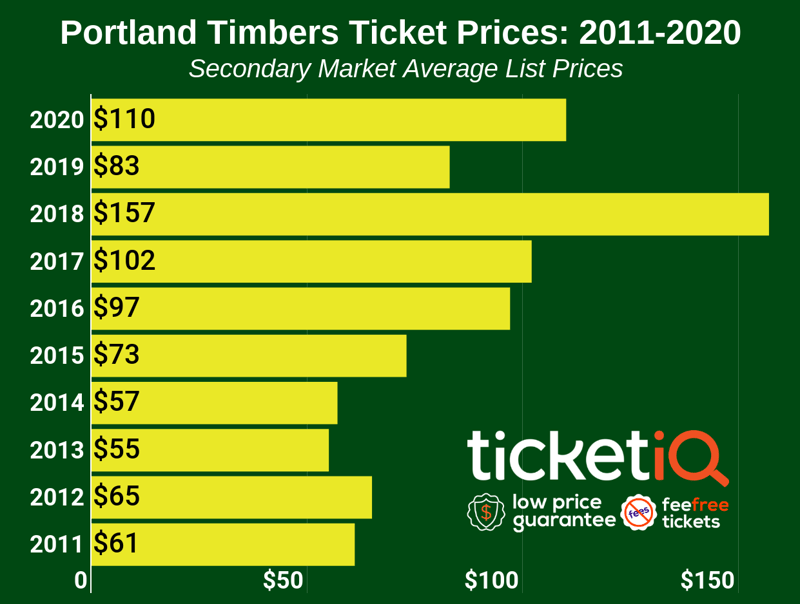 For $50 per ticket, fans can join the annual membership wait list for season tickets. Those who sign up will get the following benefits: pre-sale access for single-match 2020 tickets, for special event opportunities, and for Portland Thorns FC individual tickets. The fans who deposit also get discounts on merchandise.

The Timbers do not offer mini ticket plans, but group, hospitality, and premium seating are available via the team website. Providence Park can accommodate groups of 15 to 400, and there are special sections and club and terrace decks for fans to convene and enjoy the Timbers.