Rap superstar, Post Malone, has announced new 2020 dates for his existing tour, ‘Hollywood’s Bleeding’. The tour will kick off February 4th in Omaha, Nebraska and wrap up March 21st in the Vivint Smart Home Arena in Salt Lake City, Utah.

Post Malone is a 24-year old from Syracuse, New York who has blown up over the past few years. “White Iverson” reached #20 on the Billboard Hot 100 and his album, Stoney, is a certified triple-Platinum album. He has sold over 60 million records in the US.

Tickets--including VIP packages--went on sale to the general public on November 22nd via Ticketmaster.

Post Malone “Runaway Tour” has kicked off. The two-month North American tour began September 14th in Tacoma, Washington, and runs through November 21, wrapping up at The Forum in Los Angeles. Swae Lee and Tyla Yaweh will open on some dates.

In total, the Runaway tour has 37 total shows and Malone will play multiple dates in Toronto on October 3-4; Boston on October 8-9; New York, October on 14-15; Anaheim on November 16-17 and The Forum in Los Angeles, November 20-21 for California.

He’ll also make appearances at two festivals -- the Voodoo Music and Arts Experience in New Orleans, October 25-27 and the Life Is Beautiful Festival in Las Vegas, 20-22.

Many of the higher-interest shows are 50% or more sold out on the primary market. On the secondary market TicketIQ also has a low price guarantee on Post Malone tickets for every date on the "Runaway Tour", which means that if you find a secondary market ticket for less on a site like Stubhub or Seatgeek, we'll give you 200% of the difference in ticket credit.

How Much Are Post Malone Tickets for Runaway Tour 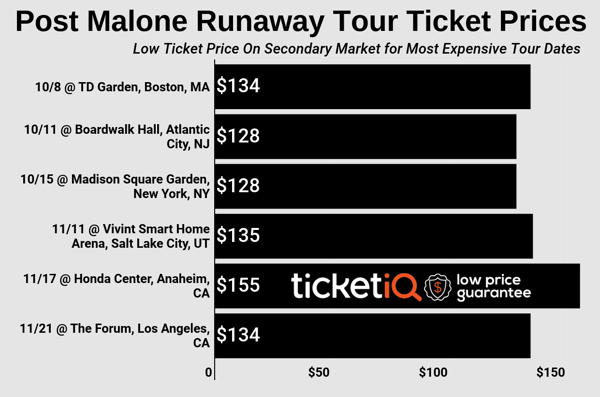 VIP packages are available for many of the shows via Ticketmaster. All VIP packages include a seat to the concert and priority entry. Some include the Post Malone Beer Pong Ball Set, party cup and lighter, while others include a chance to meet Swae Lee. VIP Packages range in price depending on the venue.

For the October 8 show at Boston’s TD Garden, Balcony tickets are available on Ticketmaster starting $93.50 and the venue is about 70% sold out. On TicketIQ, similar seats start at $134, and it also has Floor A Section tickets available starting $294.

Another show for which it will pay to comparison shop is the November 11 date in Salt Lake City. That show is about 70% sold out on Ticketmaster, and 90% sold out in the Lower Bowl, but on TicketIQ, fans can pick from any of the Lower Bowl sections, including Lower 2, directly across from the stage and sound-mix area, starting at $285.