Called “The Grandaddy of Them All,” the 106th Rose Bowl features Oregon vs. Wisconsin and is the priciest non-CFP game on the secondary market. Set for New Year’s Day, the game pits the Pac-12 champion and the Big Ten champion.

Oregon and Wisconsin last met in the Rose Bowl in 2012, when the Ducks beat the Badgers, 45-38. Prior to that, the teams had played four times during the regular season dating to 1977. Wisconsin holds a 3-2 all-time series advantage, but Oregon has won the last two meetings.

Where To Buy Rose Bowl Tickets

Primary market tickets are sold out on partner Ticketmaster, but are available in limited quantity directly from the schools via their own websites. 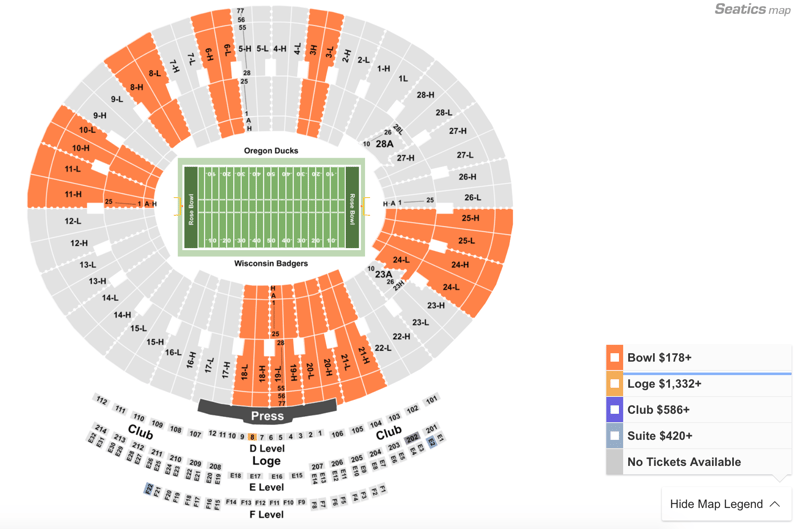 How Much Are Rose Bowl Tickets

Secondary market prices have been dropping steadily over the last few weeks and the average asking price on the secondary market is now $321 (down 40%), with the cheapest seat at $178 (down 15%). 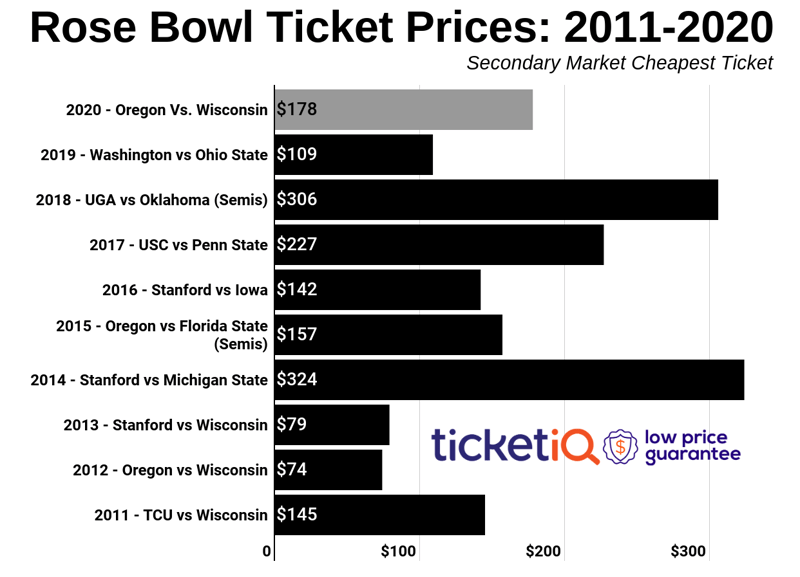 On the secondary market, Club Seats are available starting at $716 in Club E, Level 214, Row B on the corner with the TicketIQ Low Price Guarantee. Club Tickets include access to lounges, and other amenities, and are located on Levels D and E. TicketIQ also shows two Suites available, and the asking price starts at $26,225 for Suite E11. The suites include 16 seats, but do not include food and beverage. For those wanting seats close to the action, there are 50-yard line seats available for as little at $409 in Bowl 4, Row 74 between the 40- and 50-yard lines. The seats closest to the action at midfield are in Bowl 4, Row 1 for $2,295.

How To Find The Cheapest Gator Bowl Tickets (Tennessee vs Indiana)

How To Find The Cheapest Citrus Bowl Tickets (Alabama vs Michigan)

For Sold Out tickets, TicketIQ has Low Price Guarantees on all events at Autzen Stadium including Oregon Ducks football games as well as Concerts. That means that if you find a secondary market…

How To Find The Cheapest Minnesota vs. Wisconsin Football Tickets