Single-game tickets on the primary market for Major League Soccer’s San Jose Earthquakes are on sale  via Ticketmaster.

On the secondary market, TicketIQ has a Low Price Guarantee on sold out San Jose Earthquakes tickets for all games on their 2020 schedule, in addition to Low Price Guarantees on all MLS tickets. That means that if you find a secondary market ticket for less on a site like StubHub or Vivid Seats, we’ll give you 200% of the difference in ticket credit.  In our efforts to continue to provide our customers with the best deals, we’ve removed all fees.TicketIQ now shows you the full ticket price from the start of your search. TicketIQ customers save an average of 5%-20% compared to StubHub and Vivid Seats.

How Much Are 2020 San Jose Earthquakes Tickets:

Primary market tickets are available for all Earthquakes home games via Ticketmaster, and get-in prices generally start at $21 for lower demand games, and up to $36 for higher demand games.

On the secondary market, TicketIQ has seats available for some home games for as little as $26. TicketIQ currently has tickets to the Sunday, Aug. 9 game against the Houston Dynamo for as low as $26 and on Saturday, May 9 against rival Los Angeles FC starting at $50. 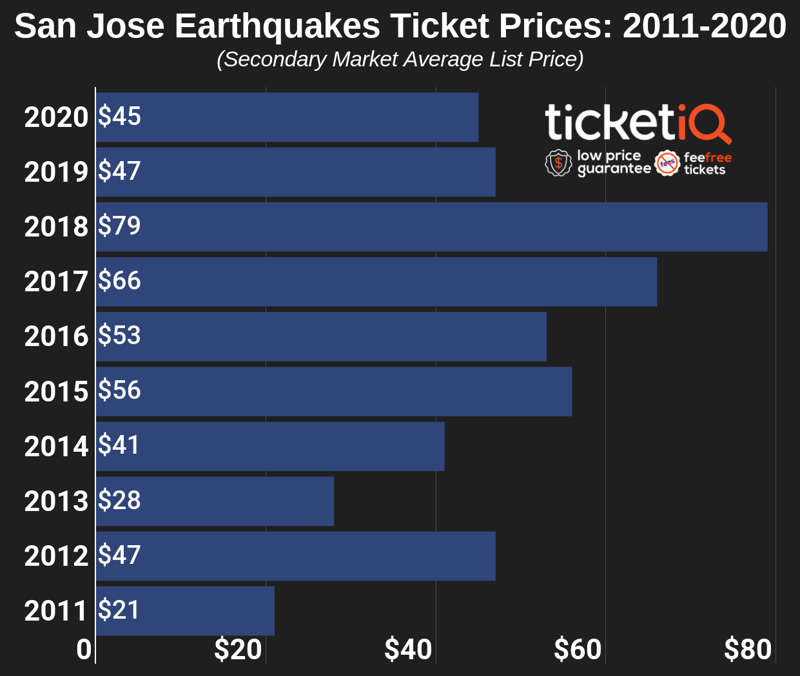