Where To Buy 2020 Seattle Sounders Tickets

On the secondary market, TicketIQ offers fans a Low Price Guarantee on all sold out Seattle Sounders FC tickets, in addition to Low Price Guarantees on all Major League Soccer tickets. That means that if you find a secondary market ticket for less on a site like StubHub or Vivid Seats, we’ll give you 200% of the difference in ticket credit.  In our efforts to continue to provide our customers with the best deals, we’ve removed all fees. TicketIQ now shows you the full ticket price from the start of your search. TicketIQ customers save an average of 5%-20% compared to StubHub and Vivid Seats.

How Much Are 2020 Sounders Tickets

On the secondary market, get-in prices range from $22-$26 for lower demand games up $47-$56 for higher demand games. The overall average asking price on the secondary market for a ticket to see Seattle Sounders FC is $86, which is $28 more expensive than last year’s price. In 2019, Sounders FC won its second MLS Cup to go along with four U.S. Open Cups and one Supporters’ Shield. 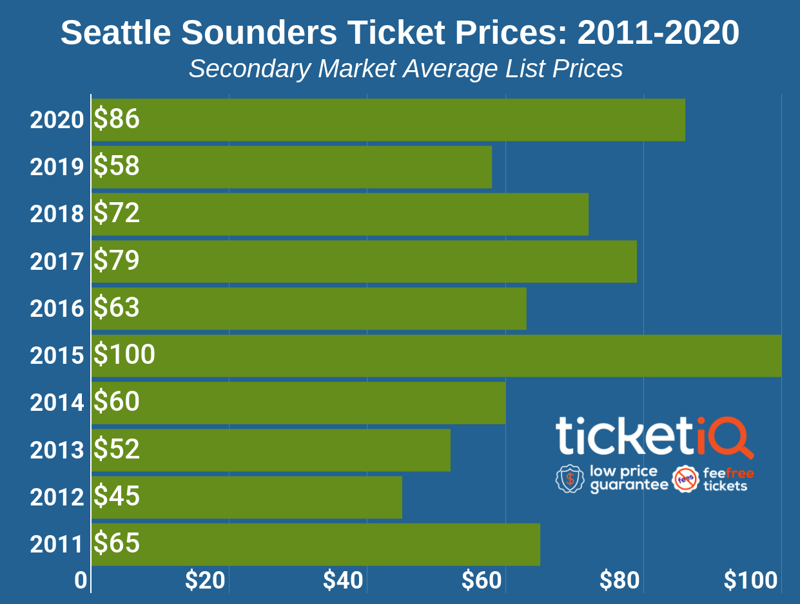 Season tickets start at $459 per seat in addition to year-round perks: exclusive presales and guaranteed seats for home playoff games in addition to no reseller fees on SeatGeek. Fans who purchase season ticket membership also can trade in tickets for up to 3 matches in 2020 for future 2020 games. Members also get an Alliance Member scarf, welcome package, exclusive invites to watch parties and team events, and 15% off at the pro shop.

Partial packages are of the 6-match and 10-match variety. The 6-match pack (formerly 7-match) starts at $186 and the 10-match (formerly 11-match) one starts at $310, and both packs are pre-selected. Fans who purchase the 10-match pack also get a 10% merchandise discount, the ticket trade program for 1 game, and discount on additional single-match tickets.

What can you bring into CenturyLink Field:

A clear bag that does not exceed 12 x 6 x 12 inches or a one-gallon, clear plastic bag. Small clutch purses measuring no larger than 4.5 x 6.5 inches are permitted in the stadium. Blankets, umbrellas and empty personal plastic sports bottles are also allowed.

You can also view a PDF breakdown of their carry-in policy directly from the team here.

Alcohol, drones, flag poles, laptops, motorcycle helmets, noisemakers, outside beverages and weapons are not allowed to be brought into the stadium. The full list can be found here.

How To Find The Cheapest LAFC Tickets + Face Value Options