How To Find The Cheapest Sugar Bowl Tickets (Georgia vs Baylor)

In this season's Sugar Bowl No. 5 Georgia will face No. 7 Baylor. It will be the first time the two teams have faced each other in a bowl game. The teams have played four times during the regular season, between 1972-89, and Georgia won all four meetings.

Where To Buy Sugar Bowl Tickets

On the secondary market TicketIQ will offer fans a Low Price Guarantee on all sold out Sugar Bowl tickets in addition to Low Price Guarantees on all sold out college bowl games and college football playoff tickets. That means that if you find a secondary market ticket for less on a site like StubHub or Vivid, we’ll give you 200% of the difference in ticket credit. TicketIQ customers save up to 25%.

How Much Are Sugar Bowl Tickets

On the primary market, fans will be able to get into the game for $100. The cheapest seats are located in the 600 sections at the top of the Mercedes-Benz Superdome in New Orleans. All available 200-Level seats via Tickettmaster are on the corners or in the end zone and start at $170, while there are a handful of seats on field level in end zone and on the corners, all for $210.

Fans will find tickets for less on the secondary market, as secondary ticket marketplace TicketIQ has 600-Level seats for as little as $24. There is also a wider selection, with sideline seats on both the 300 and 100 Levels still available. 300-Level sideline seats are Club Seats and start at $76 in Loge 303 overlooking the end zone, and go up to $786 in Loge 336, Row 17 above the 50-yard line. Club tickets come with lounge access and premium food-and-beverage options. 100-Level sideline seats start at $85 in Plaza 111, Row 34 overlooking the end zone, and 50-yard line seats remain on the Baylor side for $1,010 in Plaza 142, Row 35.

The average asking price on the secondary market is $109, making it one of the cheapest of the major bowl games.

Historically speaking, this year's Sugar Bowl average price is the least expensive since we've been tracking data. Below is a look at get-in prices for each Sugar Bowl since 2010: 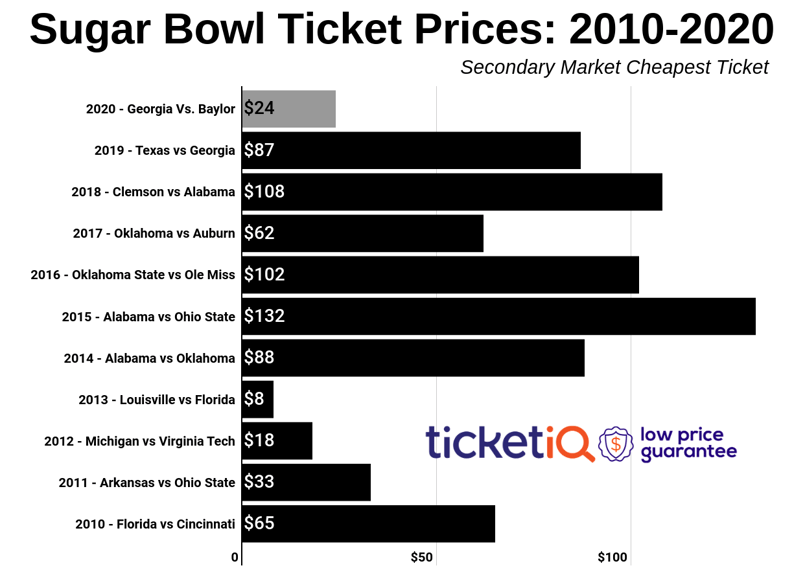 How To Find The Cheapest Raiders Vs. Jaguars Tickets on 12/15/19

For sold out seats TicketIQ has Low Price Guarantees on all events at Sanford Stadium for Georgia Bulldogs football games well as Concerts. That means that if you find a secondary market ticket…

Where To Find The Cheapest Georgia Vs. South Carolina Football Tickets At Sanford Stadium On 10/12/19