Primary market single-game tickets for the first Toronto Blue Jays home stand in Buffalo went on sale on Thursday at 10:00 a.m. to the general public via the team's website and are now sold out.
On the secondary market, TicketIQ has Fee-Free Toronto Blue Jays tickets which also include a Refund Guarantee. Our Refund Guarantee states that if an event is canceled or deemed unfit for fans to attend, TicketIQ will refund ticket buyers in as soon as 15 days. That means that you can buy from TicketIQ worry-free. Customers on TicketIQ save between 15%-25% compared to other secondary market ticketing sites.

How Much Are 2021 Toronto Blue Jays Tickets

On the primary market tickets can be found these ranges for upcoming games (before fees):

On the secondary market, get-in prices for games in Buffalo start in the $80-$100 range.

Blue Jays fans can select from ticket packs of 12, 24, or 40 games, and the price is determined by seat and game selection. Fans purchasing a 24-game pack will get two 20% off merchandise vouchers, and fans purchasing a 40-game pack will get three discount vouchers plus priority postseason access. The price of each package depends on seat location, and fans can build their own package. Season ticket holders will be contacted by the Blue Jays as more information becomes available.

The Blue Jays have put some of their speciality tickets on hold until the team sorts out where it will play, but the team is making some information about the TD Executive Suites, which are scattered around Rogers Centre, available. These suites start at $2,000 for 16 guests in an outfield suite. Catering and beverages are available at an additional charge, and some of the TD Executive Suites can seat up to 46 fans. Suites are accessible anywhere from 90 minutes to two hours before game time.

On June 1st the Blue Jays began playing their home games at Sahlen Field in Buffalo, NY. However, it is now being reported that the Blue Jays could return to Toronto for the first time since 2019 as early as July 30th.

The team has submitted an application to the federal government that would see them return to their hometown to play out the rest of the 2021 season, a spokesperson for the Blue Jays told CTV News Toronto on Monday.

“The club has received municipal and provincial support on a return to Toronto this summer, and [has] submitted an application to the federal government for approval,” the spokesperson said.

Single-game primary market tickets for the Toronto Blue Jays went on sale Thursday, January 23, and seats are available via Ticketmaster.

On the secondary market, TicketIQ will offer fans a Fee-Free Toronto Blue Jays tickets in addition to Fee-Free tickets for all Major League Baseball games.

How Much Are 2020 Toronto Blue Jays Tickets?

On the secondary market, TicketIQ has seats available for all Toronto Blue Jays home games. Tickets to most home games start at $30 or less, though for some bigger series or weekend games, the cheapest seat is more than $30.

Overall, secondary market Blue Jays tickets are averaging $70 for the 2020 season, which is up just over 4% from last year. Below is a chart showing secondary market prices for the Jays since 2020. 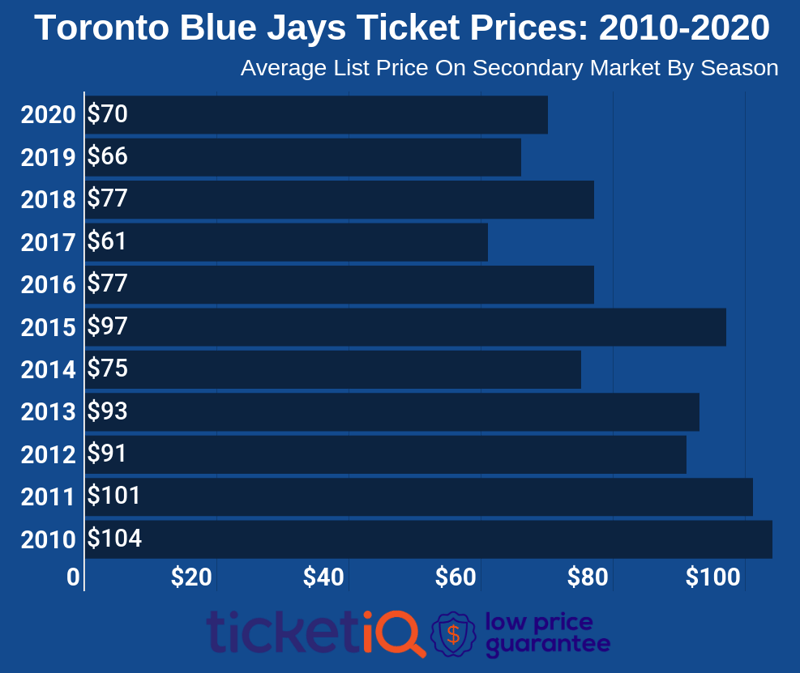 On the primary market, fans can also purchase ticket packages, ranging in size from a 12-ticket pack to full season tickets. For the 12-, 20- and 40-game packages, fans can select the number of tickets (rather than games) and location for each game. Prices for the packages vary depending on what games are selected. Season tickets, which also vary based on what seats are selected, include a dedicated entrance, early entry, discounts at the Jays Shop, access to presages at the stadium, as well as invitations to exclusive events and on-field experiences.

The Blue Jays offer mobile ticketing via BlueJays.com, through which bans can purchase tickets and have them delivered to a mobile device.

Where to Find The Cheapest 2021 Phish Tickets + Face Price Options

36,742Where To Buy 2021 MLB Tickets Fans are coming back to MLB stadiums for 2021 and TicketIQ has MLB tickets that are Fee-Free and come with a Refund Guarantee. Our Refund Guarantee states that…