Below is the recently announced Vancouver Whitecaps schedule for the First Phase of the continued 2020 regular season:

The rest of the schedule should be released by early September.

Where To Buy 2020 Vancouver Whitecaps Tickets

On the secondary market, TicketIQ has a Low Price Guarantee on sold out Whitecaps tickets for all games on their 2020 schedule, in addition to Low Price Guarantees on all MLS tickets. That means that if you find a secondary market ticket for less on a site like StubHub or Vivid Seats, we’ll give you 200% of the difference in ticket credit.  In our efforts to continue to provide our customers with the best deals, we’ve removed all fees.TicketIQ now shows you the full ticket price from the start of your search. TicketIQ customers save an average of 5%-20% compared to StubHub and Vivid Seats.

How Much Are 2020 Vancouver Whitecaps Tickets:

On the secondary market, TicketIQ has seats available for some games for as little as $29. Some of the higher demand games, like May 23rd vs FC Dallas and September 19th vs the Houston Dynamo, have get-in prices north of $70.

Overall, Whitecaps tickets on the secondary market are averaging $64 for the 2020 season, which is down 15% since last season. It's also the lowest ticket prices have been since the 2015 season when the average was under $50. 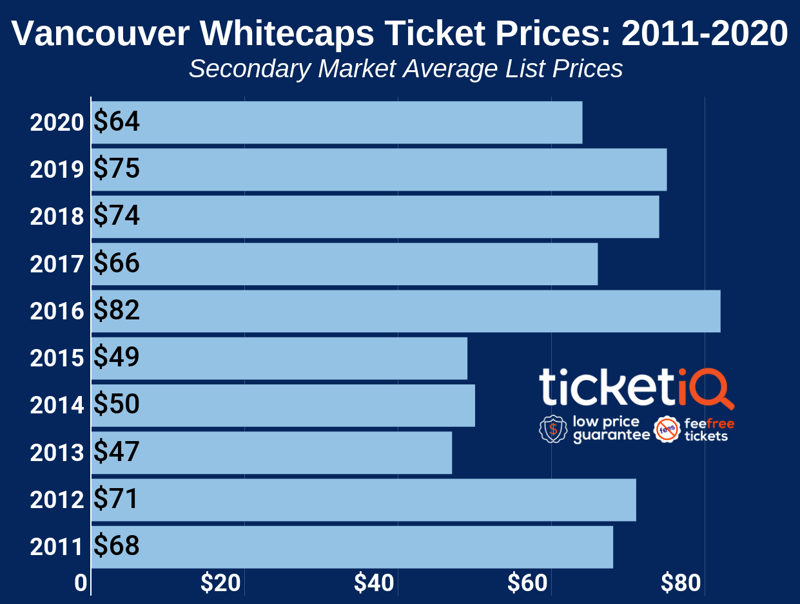 On the primary market, fans can purchase season ticket plans starting at $44 per month and save up to 39% over single-game tickets. Caps Club Membership includes all 17 MLS regular season matches and Canadian Championship matches at BC Place. Season-ticket holders enjoy games and giveaways, discounts on merchandise and presale for playoff tickets. Five-pack tickets starting at $82 per ticket and Flex Club Membership starting at $50 are also available through the team.

In an effort to reduce ticket fraud and duplication, the Vancouver Whitecaps urge fans to use the Ticketmaster Whitecaps app which can be downloaded from the team’s website.

What can you bring into BC Place

A clear bag that does not exceed 14 x 14 x 6 inches along with bottles or containers that are not larger than 1 liter. Tablets and tablet cases are permitted, but they will be inspected prior to entry.

TicketIQ is committed to the cheapest tickets possible, and we make much less on sold out tickets compared to other major marketplaces like StubHub and Vivid. That means ticket buyers save from up to 25% on TicketIQ on sports, music and theater. We're able to do this because we also work with teams, venues, and other ticket owners, to help them sell tickets at face price, directly to consumers like you, through Ticketmaster, Seatgeek and AXS. For an overview of the 2019 MLS Ticket buying landscape, and details on the cheapest way to get tickets for every MLS team, visit the TicketIQ Blog.

Where to Find The Cheapest Iowa vs. Penn State Basketball Tickets

Where & How To Buy 2021 MLS Tickets Primary market face value MLS tickets and season ticket management for the 2021 season is provided by Ticketmaster, Seatgeek, AXS, Paciolan, and TicketPro. …