How To Find The Cheapest 2022 World Series Tickets

World Series ticket prices are most driven by how long it's been since a team has been in the Fall Classic. For teams that have not been in the World Series in a long time, prices will be higher, while teams that have recently been in the World Series will have cheaper ticket prices. The best illustration of this was the Cubs in 2016, when prices went above $6,000, as the Cubs looked for their first World Series title in over 100 years.  In addition to that 'scarcity' factor, on the field performance can also impact how prices trend over the course of the series. For teams that don't have home-field advantage, two losses in games 1 and 2 could lead to a big drop for prices games 3, 4 and 5. On the flip side, if the team hosting games 3, 4 and 5 wins the first two games, prices for the next three games will increase. Potential clinching games will also drive prices up for home teams that have a chance to win the World Series in front of their home crowd.  Whenever evaluating when to buy, it's important to look at available inventory in the section you're interested in, rather than looking at available tickets for the entire event. If there are limited tickets on the secondary market in the section you're interested in, they're not likely to go down, assuming there's not any Covid-related surprises, or additional variants.

How Much Do 2022 World Series Tickets Cost

The current average list price for 2022 World Series games in Philadelphia is $2,653, which is the fourth-highest of any team since at least 2010.

The average price for World Series games in Houston is $1,584, which is the second-highest for the Astros of their four trips to the World Series since 2017.

Below is a look at the secondary market average list price, and get-in price by game for the 2022 World Series:

How Much Do World Series Tickets Usually Cost 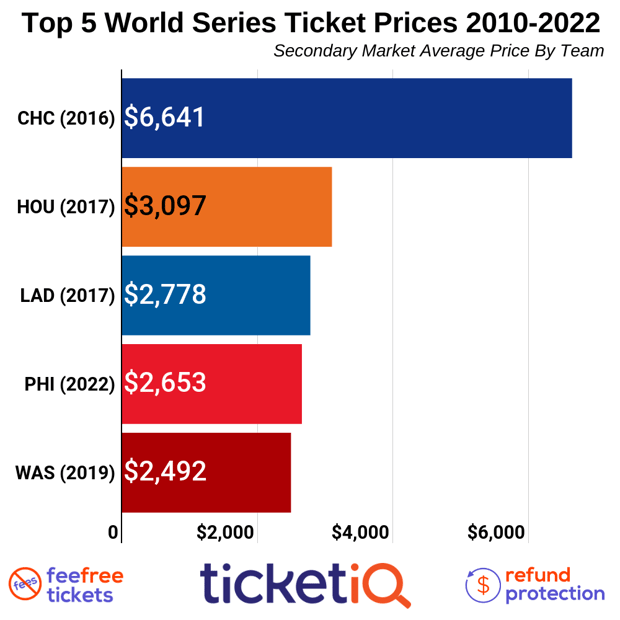