Pop star Jennifer Lopez's second career tour kicks off June 7 with two dates at Los Angeles' The Forum and runs through July 26. Lopez will do two shows each in L.A., Toronto (July 7-8), New York City (July 12-13) and Miami (July 25-26). The NYC shows appear about 80% sold out via Ticketmaster, and fans will have a bigger selection of seats a few days later on July 19 at the show Newark show.

There are secondary market tickets available for all dates, many of which are 75% or more sold out on the primary market. Secondary ticket marketplace TicketIQ offers a Low Price Guarantee, which means that if you find a secondary market ticket for less on a site like Stubhub or Seatgeek, we'll give you 200% of the difference in ticket credit.  Download the TicketIQ app for $20 off your first ticket purchase 📲 🎟️

There are also special LaneOne packages are available for most shows.

Below is a look at the higher-interest tour stops:

Secondary market tickets cross the $100 barrier for five of the 29 show dates. The get-in price for most shows ranges between $40-$90, and the cheapest show will cost fans $31 at Mansfield, Massachusetts on July 16. 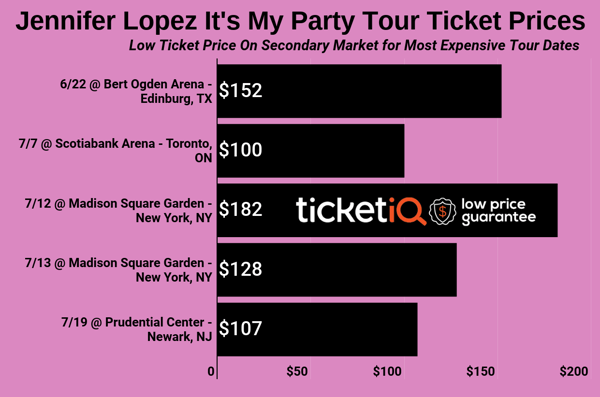