UPDATE: On August 21st it was announced that the 2020 Kentucky Derby will be held without fans.

“We were confident in that plan, but dedicated to remaining flexible using the best and most reliable information available,” the statement said. “With the current significant increases in Covid-19 cases in Louisville as well as across the region, we needed to again revisit our planning. We have made the difficult decision to hold this year’s Kentucky Derby on September 5 without fans.”

For the first time in history, the Kentucky Derby will not be the first jewel in horse racing's Triple Crown. Due to the COVID-19 crisis, the race, usually scheduled for the first Saturday in May, is set for Saturday, September 5th.

Based on the limited attendance, the estimated ticket market value losses for the Kentucky Derby is just over $181 million. That estimate is based on secondary market value*number of seats based on last year's attendance figures. This is not a precise measure, but the simplest way to benchmark the magnitude of losses for the event.

Where To Buy Kentucky Derby Tickets

Primary market tickets go on sale via Ticketmaster on Sunday, August 23 at 11:59 pm EDT.
On the secondary market, TicketIQ has seats available for the Kentucky Derby, and we have Fee-Free tickets with a Low Price Guarantee and Refund Guarantee, which states that in the event an event is canceled or deem unfit for fans to attend, TicketIQ will refund ticket buyers within 15 days. That means that you can buy from TicketIQ worry-free. With the Low Price Guarantee, if you find the same ticket for less on another secondary market ticket for less on a site like StubHub or Vivid Seats, we’ll give you 200% of the difference in ticket credit.

How Much Are Kentucky Derby Tickets

On the secondary market, the average asking price for a Kentucky Derby ticket is $1,423, which would make it the priciest Derby ticket since TicketIQ began tracking data. The next most expensive was $1,029 for the 2015 Run for the Roses, and the cheapest was $717 in 2017. In 2015, American Pharoah won the Derby on his way to becoming the 12th Triple Crown winner. Ticket prices have also risen significantly since the event was postponed back in May due to the Coronavirus pandemic. 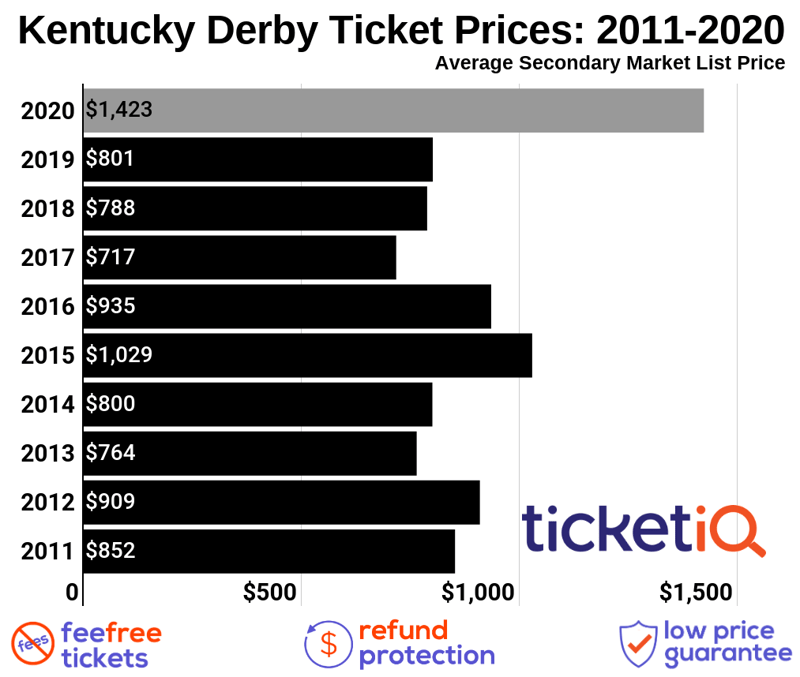 The current least expensive ticket on the secondary market is $108, which is the third most expensive get-in price this decade.
TicketIQ has seats available throughout Churchill Downs, and the cheapest tickets are $108 in the infield. The cheapest seats are listed at $522 for Lower Grandstand 128, Row J, just past the 3/16 pole. Lower Clubhouse seats start at $763 in Section 112, Row L, Mezzanine Club tickets start at $1,262 in Section 212, Row B, and 300-Level tickets start at $1,289.
There are Club Sections on the 200 Level (Mezzanine Club) and 300 Level (Upper Club). Both include access to exclusive lounges, balconies from which to watch the race and other premium amenities.
The most exclusive and priciest tickets are listed for $21,925 in the Mansion Club. For the price, you get a table for eight, and a private concierge that meets you in the parking lot and guides you through the day. Mansion ticket holders get access to a massive, high-end buffet, the paddocks, trophy room and other exclusive spots within the venue. The club itself is behind a heavily guarded door.
Kentucky Derby Horse Racing Kentucky Derby Tickets Other

Belmont Stakes Tickets Down 35% On Resale Market Since The Preakness

One Day Out, Prices for Last Minute Kentucky Derby Tickets Continue To Tumble on Secondary Market