R&B singer Khalid will kick off his latest tour, the "Free Spirit World Tour" on June 20 in Glendale, Arizona, and the North American leg will wind through the U.S. and Canada before wrapping up in Miami on August 17. The tour will make multiple stops Los Angeles, June 25-26; New York, July 31-August 1; and Toronto, August 6-7.

Where To Buy Khalid Tickets

Demand is high and many of the higher-interest shows are nearing sellouts on the primary market, so fans should shop around as there may be a bigger selection for some shows on the secondary market.

TicketIQ also has a Low Price Guarantee on Khalid tickets for every stop on his "Free Spirit World Tour", in addition to Low Price Guarantees on all concert tickets, which means that if you find a secondary market ticket for less on a site like Stubhub or Seatgeek, we’ll give you 200% of the difference in ticket credit. TicketIQ customers save an average of 5%-20% compared to Stubhub and Seatgeek.

How Much Are Khalid "Free Spirit World Tour" Tickets 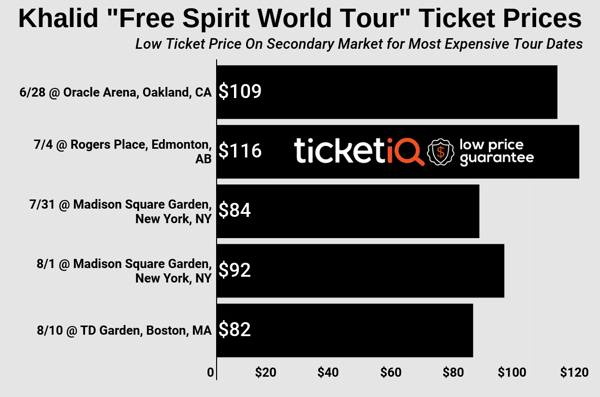 The July 31 show at Madison Square Garden is a great example of why fans should comparison shop. The show is 95% sold out on the primary market, and most of the available seats are singles. TicketIQ has seats in most sections, ranging in price from $86 for Lounge 302 high above the concert floor to seats in Row 5 of Section 116 just adjacent to the general-admission floor section, for $496.

For the August 10 show at Boston's TD Garden, there are mostly single seats available via Ticketmaster. Only the Loge Sections have seats for two or more still available, starting at $94.45. For the same show, TicketIQ shows seats available throughout the arena, including General Admission floor tickets starting at $163.

The cheapest show of the tour appears to be the final U.S. concert in Miami on August 17. On the primary market, fans can get in and get a seat in the 400 sections for $35.95 while seats in the same sections on the secondary market start at $34.

Below is a look at the higher-interest shows, with secondary market get-in prices of $80 or more:

How To Find Cheap Tickets For Hugh Jackman The Show Tour