With the release of her 14th studio album 'Madame X' on June 14, the queen of pop has unveiled her first new album since 2015’s Rebel Heart. Fans interested in seeing the Material Girl's latest tour have an opportunity to see her perform intimate shows scheduled in a residency model in New York, Chicago, Los Angeles, Las Vegas, Boston, Miami and Philadelphia.  Tickets are available on both the primary market through Ticketmaster as well as on the secondary market.

Unlike past tours for the Material Girl, all the venues for the 2019 tour are at venues ranging from 1,850 seats to 3,500 seats--a far cry from Rebel Heart, which was seen by over 1 million fans and grossed $169 million in ticket sales. For fans interested in getting up-close to Madonna, the Wang Theatre in Boston holds 3,500 fans, while the Fillmore in Miami holds 3,200. At 4,300-person capacity, the the Colosseum at Caesars Palace is the largest of the venues, while the Met Philadelphia has a capacity of 3,500. The first set of venues announced were the 3,000-seat Brooklyn Academy of Music In New York, the 3,600-seat Chicago Theater. The 1,850-seat the Wiltern in Los Angeles is the smallest of any of the venues announced so far.

Where to Get Madonna Tickets At Howard Gilman Opera House - Brooklyn, NY

Madonna plays 19 shows in Brooklyn, New York, starting on September 12th and running through October 12th. The majority of tickets are sold out directly from Ticketmaster, with a few shows having scattered unsold seats, especially for weekday shows. Below is a seating chart on Ticketmaster for the show on Wednesday, October 7th. If there are unsold tickets available, they are usually cheaper than what's available on the secondary ticket market. 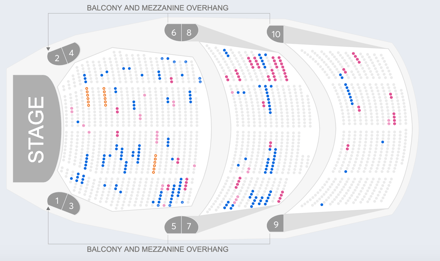 Where to Get Madonna Tickets At The Chicago Theatre, Chicago, IL

Madonna plays 6 shows in Chicago, IL, starting on October 15th and running through October 24th. The majority of tickets are sold out directly from Ticketmaster, with a few shows having scattered unsold seats, especially for weekday shows. Below is a screenshot from one of the shows via Ticketmaster compared to the same night on TicketIQ. TicketIQ has tickets in all sold out sections and in some sections like Loge 3R below, TicketIQ has the cheapest tickets. 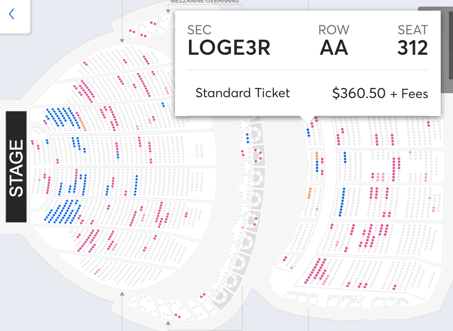 Where to Get Madonna Tickets At Golden Gate Theater, San Francisco, CA

San Francisco wasn't originally on the schedule of Madonna's small theater-based Madame X Tour, but three shows were added at the Golden Gate Theater, on October 31, November 2, and November 4.

Where to Get Madonna Tickets At Wilterm Theatre, Los Angels, CA

Madonna plays 11 shows in Los Angeles, starting on November 15th and running through November 24th. About 100 tickets remain unsold for most of the show via Ticketmaster, with the majority of those seats available as Premium seats in the Orchestra section.  There are very few unsold tickets in the Loge or Mezzanine level, and if you find one, it's probably cheaper than anything available on the secondary market.  On TicketIQ, the cheapest sold out Loge seats cost $350.

Where to Get Madonna Tickets At Caesars Palace in Las Vegas, NV

Madonna plays 3 shows in Miami, starting on November 7th to November 10th, and it's the most sold out of all the strops on Madame X.  The cheapest tickets on the secondary market start under $400

Where to Get Madonna Tickets At Wang Theatre, Boston, MA

Madonna plays 3 shows in Boston, starting on November 30th and running through December 2nd.  While the Saturday night show is completely sold out, a large amount of unsold face value tickets are still available in the Balcony sections, starting at $99.  While there are some orchestra seats available for Sunday and Monday, Secondary market prices are cheaper for Orchestra seats.

Where to Get Madonna Tickets At Met Center in Philadelphia, PA

Madonna plays 4 shows in Philadelphia, starting on December 7th to December 11th. While three of the show are majority sold out, the Tuesday night show has the majority of tickets still available.

Where to Get Madonna Tickets At Filmore In Miami, FL

Madonna plays 5 shows in Miami, starting on December 14th to December 19th. While the first two shows are mostly sold out, the  final three shows all have tickets available in the Orchestra.  The Mezzanine level is almost compltelty sold out, which means the secondary market is the best option.

TicketIQ is a ticket marketplace with access to Low Price Guarantees on all Concert tickets. If you find the same ticket for less, we'll give you 200% of the difference in ticket credit.  Download the TicketIQ app for $20 off your first ticket purchase 📲 🎟️ Below are the cheapest tickets at each of the US-stops for the tour. TicketIQ customers save an average of 5%-20% over Stubhub or Seatgeek. For an overview of all Summer Concerts and the best way to find cheap tickets, visit the TicketIQ Blog Summer concert buying guide.

For fans looking to go all out for the $1,995 Medellin VIP, it comes with the below, along with a ticket up and close.

(UPDATE 1/8/16) The end is near for Madonna's "Rebel Heart" Tour, which braces for one more North American run through January. The 57-year-old singer is slated to play eight shows between January 10 and 24, and the average price for Madonna tickets on TicketIQ over that time is $277.13.

Below is a complete price breakdown of the final leg of shows, detailing the average price and cheapest ticket available to each date:

(UPDATE 9/28/15) Hampered by initial claims that it was underselling at many dates, Madonna’s “Rebel Heart” Tour has proved to be quite the opposite over its first three weeks of life. The iconic singer is set to gross an estimated $200 million over her five-leg jaunt through March of next year, with several arenas receiving back-to-back shows due to overwhelming ticket demand. On top of that, Madonna tickets are still generating massive prices on the secondary market as well.

According to TicketIQ the average price for Madonna tickets is $293.81, marking a .4% climb from last Monday’s average of $292.55. With 15 shows remaining on her first North American leg, seven of those gigs are averaging above $300 on the secondary market. In fact, her October 24 show at the MGM Grand in Las Vegas is among the most expensive shows of the year, averaging $886.24 and get-in price starting at $213.

A European leg in November and December separates the “Material Girl” singer from her second and final North American stretch in January. Over her seven U.S. shows that month, tickets are currently averaging $305.20 on the secondary market.

(UPDATE 9/21/15) Consider the Material Girl one of the hottest touring acts of the fall. The ageless Madonna is currently gallivanting across North America on her “Rebel Heart” Tour, which continues its first U.S. and Canadian leg through the end of October.

Expect to pay big if planning to attend an upcoming gig, however, as Madonna’s continental trek is the second most expensive tour on the secondary market this fall. According to TicketIQ the average secondary market price for Madonna tickets is $292.55. That is trumped only by Taylor Swift’s “1989” World Tour, which is averaging $401.90 across its remaining 19 shows through the end of next month.

Much of Madonna’s secondary market success is being generated by top-priced shows at the MGM Grand Garden in Las Vegas on October 24, The Forum in Los Angeles on October 27 and Toronto’s Air Canada Centre on October 6. Each of those gigs are averaging over $400 on TicketIQ, with the Sin City show owning a whopping $877.90 average and $178 get-in price.

Even Madonna’s most affordable shows are finding big secondary market ticket demand. Her October 12 show at Rexall Place in Edmonton currently averages $142.35. That is still more expensive than what pop newcomers like Ariana Grande ($129.22 avg.) and Nick Jonas ($127.94) are averaging across the entire respective tours. It pays to be the Queen, and Madonna is seeing just that in terms of secondary market ticket demand.

Reports initially stated that Madonna’s tour was underselling, but with the addition of several second shows in cities across the U.S. and Canada it appears that demand is overwhelmingly high to see the Queen of Pop from her throne on the stage this fall. Madonna returns to North America for a second leg in January following a European jaunt between November and December. Asia and Oceania legs will wind the tour down in February and March.

(UPDATE 6/19/15) Madonna will be inviting a surprising opener for her New York City dates on the Rebel Heart Tour. The singer will not be joined by another music artist, but a comedian, Amy Schumer. Schumer has taken off over the past couple of years, from increasing popularity in her standup, her Comedy Central show, Inside Amy Schumer, and an upcoming movie she both wrote and starred, Trainwreck. Schumer will open for Madonna’s three New York dates, two at Madison Square Garden on September 16 and 17 and one at Brooklyn’s Barclays Center on September 19. The combined average price for those three shows is $353.66, 12.7% more expensive than the overall tour average of $313.83.

(UPDATE 4/2/15) Reports will tell you that her tour is in low demand, but Madonna is proving otherwise. The iconic diva continues to add more North American dates to her Rebel Heart World Tour, and her latest announcement has her playing additional shows in Montreal, New York, Toronto and Edmonton on her late-summer and fall run.

Following the wrap of her U.S. and Canadian leg in late October, the "Like A Virgin" singer heads to Europe for dates in November and December.

Check out the complete updated North American tour itinerary below.

(UPDATE 3/24/15) Madonna is showing that she’s a rebel at heart, and it continues to sell. The iconic 56-year-old pop star is slated to embark on her Rebel Heart World Tour in August, and overwhelming ticket demand has prompted her to announce additional performances in Miami, New York City and Toronto.

The newly added dates will be held on August 30 at the American Airlines Arena, September 17 at Madison Square Garden and October 6 at Air Canada Centre. 26 North American dates in total are scheduled between August and October. Following her run in the U.S. and Canada, Madonna heads to the U.K. and Europe from November to December.

Rebel Heart is Madonna's 13th studio album and first since 2012's MDNA. Released earlier this month, the album peaked at No. 2 on the U.S. Billboard 200 and moved more than 116,000 in the U.S. alone during its first week of sales.

(UPDATE 3/2/15) The Queen of Pop, Madonna will be hitting the road later this year in support of her upcoming album “Rebel Heart”, which is set to be released in the U.S. and Canada next Tuesday, March 10. The iconic pop star has announced the first two legs of the Rebel Heart World Tour and will hit North America from August to October and Europe from November to December.

The tour kicks off on August 29 at the American Airlines Arena in Miami, Florida. 21 dates are scheduled in the U.S. and Canada through October 27, when it wraps its North American leg at The Forum in Los Angeles.

The European leg will begin on November 4 in Cologne, Denmark at the Lanxess Arena. The “Living for Love” singer will play 14 shows and conclude at the SSE Hydro in Glasgow, UK on December 20.

Tickets to Madonna’s upcoming tour go on sale next Monday, March 9. Up until March 30, every ticket purchased for upcoming North American shows will also include a digital copy of the super deluxe version of “Rebel Heart”. The super deluxe edition contains six additional songs, four of which were previously unreleased.